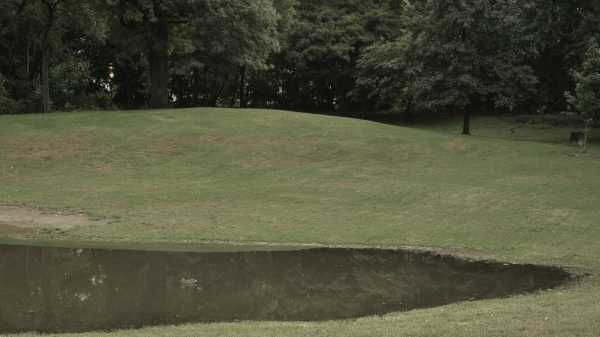 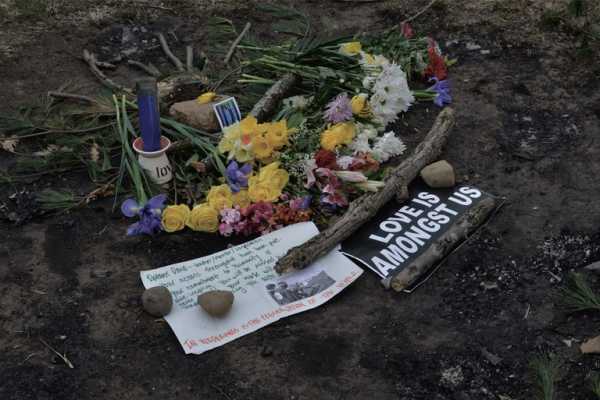 On a Saturday morning in the spring of 2018, an environmentalist and former L.G.B.T.Q.-rights lawyer named David Buckel stood on a berm of grass in Prospect Park, doused himself in gasoline, and set himself on fire. Minutes before, he had e-mailed prominent media outlets a lengthy cri de coeur against the environmental devastation we are daily wreaking on the Earth. “Most humans on the planet now breathe air made unhealthy by fossil fuels, and many die early deaths as a result—my early death by fossil fuel reflects what we are doing to ourselves,” he wrote.

Buckel’s death succeeded in provoking a brief flurry of press coverage. But then the media cycle moved on. (“A Man Set Himself on Fire. We Barely Noticed.” an Op-Ed headline in the Times read.) Unlike other famous self-immolation protests, such as that of the Vietnamese monk Thích Quảng Đức, in 1963, or the Tunisian produce vender Mohamed Bouazizi, in 2010, Buckel’s death was not photographed, and thus the grisly scene did not sear itself into the public consciousness. This was perhaps by design: Buckel chose to end his life early in the morning, as the day broke, seemingly to minimize the number of witnesses. Next to his remains, first responders discovered an identification lanyard and an additional handwritten note directed at them. The note concluded, “I apologize to you for the mess.” 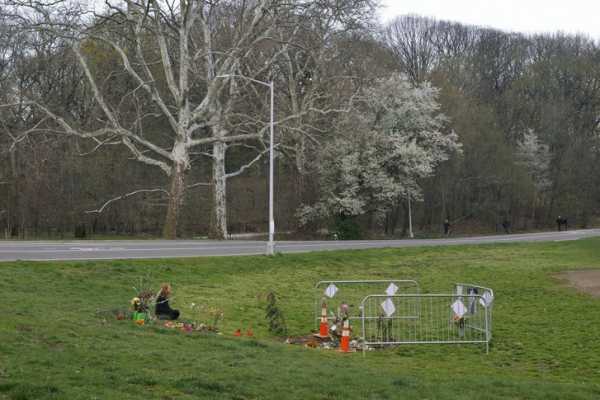 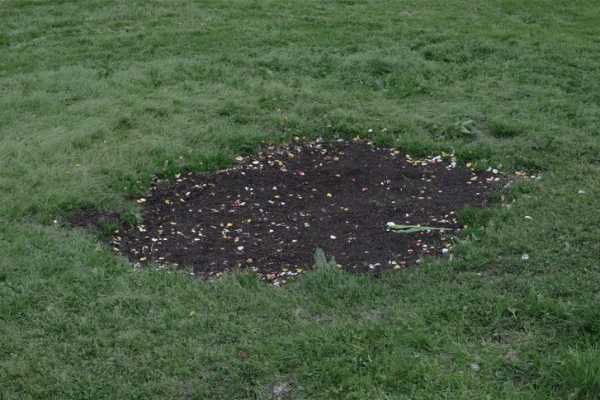 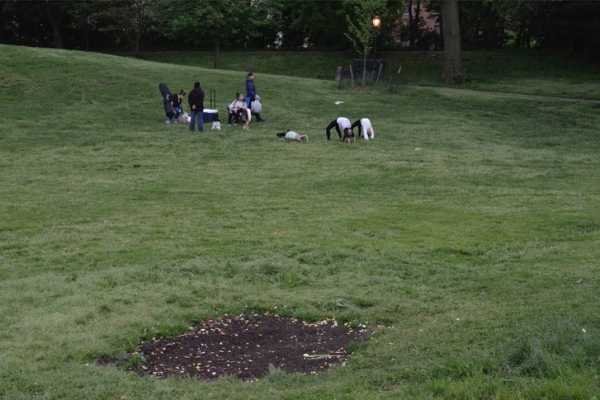 The Saturday on which Buckel chose to end his life happened to be one of that spring’s most beautiful days, and the park became a magnet for people yearning to thaw the remaining winter frost from their bones. I know, because I was among them. I remember the plumes of barbecue smoke wafting over the heads of families, the downy grass on which I lounged and watched a game of touch football, and the pall cast when I glanced at my phone in the gathering dusk and saw the news of Buckel’s death. Elsewhere in the park that day, I learned later, was the photographer Joel Sternfeld, on an outing with his son. Recently, he showed me the photographs he took of his young son playing in the woods that afternoon, not far from the scorched circle of earth that Buckel left behind. 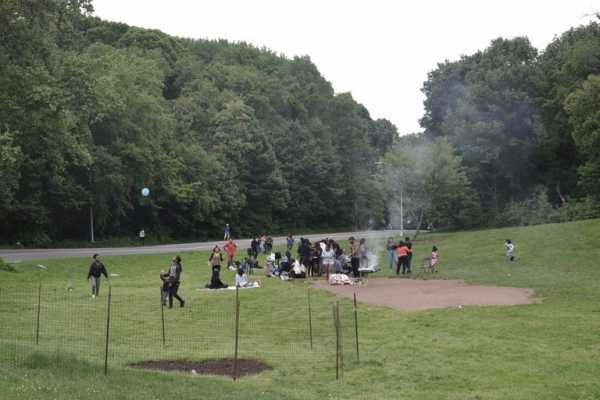 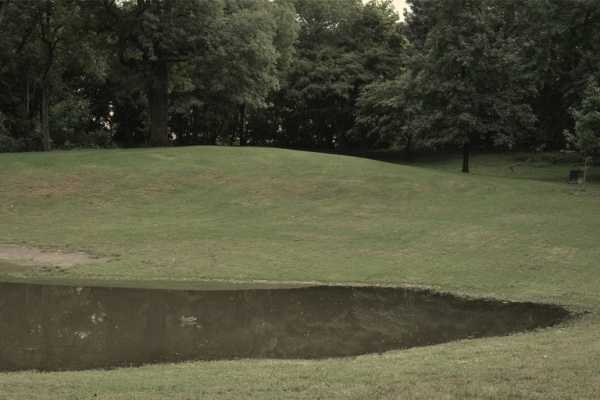 That grim landmark would become a site of pilgrimage for Sternfeld for the whole of the coming year. He first photographed the spot on the day after Buckel’s death, when police cones—topped, by mourners, with bright-yellow flowers—were still marking off the area, and he returned every couple of days thereafter to document its changes. His new book, “Our Loss,” collects those images. Paging through them, one is immediately struck by the sheer ordinariness of the site. Through Sternfeld’s lens, we see a few visitors pay their respects: a young woman seated by a watering can full of flowers, her headphones around her neck and her eyes closed in contemplation; another in a dark quilted coat who peers down at the spot as if it were an open grave. But we also see life carrying on: children’s birthday parties and outdoor yoga sessions, summer rain and blankets of snow. In November, a number of scrawny saplings appear, each propped up by posts and protected by circular fencing—the beginnings of a memorial grove. Through his sustained attention, Sternfeld creates both a meditation on the gravity of Buckel’s sacrifice and a record of the majesty of nature’s cycle, whose disruption Buckel sought to thwart. 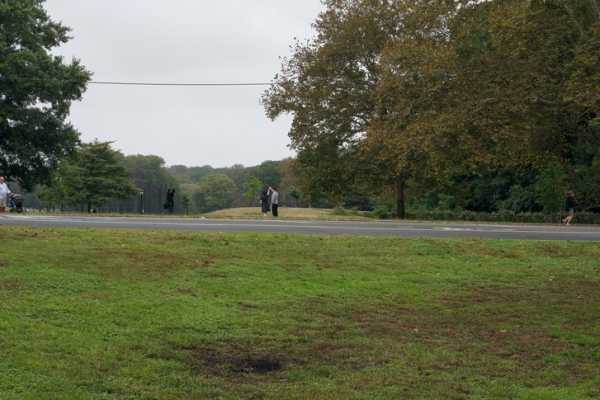 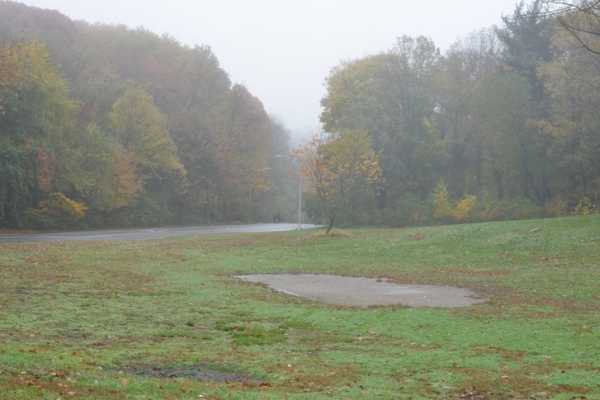 “Nature, and, in particular, the seasons, have been the central preoccupation of my life,” Sternfeld told me. Now seventy-five years old, he grew up in Belle Harbor, Queens. He recalled a youth full of outdoor adventures, enriched by prototypical “boys’ books” like Joseph Altsheler’s “The Young Trailers” series and, later, by authors like Thoreau and Henry Beston. Sternfeld’s love of nature is evident in some of his earliest photographs, such as those in his seminal body of work, the landscape series “American Prospects” (1987). Sternfeld told me that his travels for that project were inspired by his reading of “North with the Spring” (1951), by the American naturalist Edwin Way Teale, who travelled from Florida to Maine tracking the spring bloom. 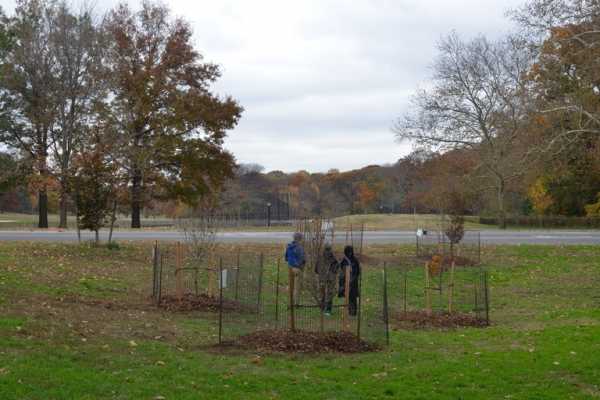 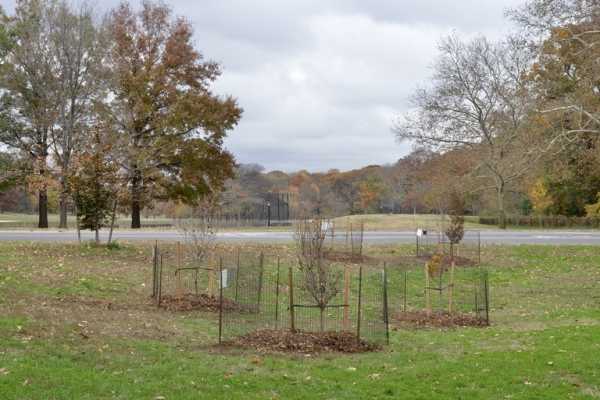 As he crisscrossed the country with his camera, Sternfeld could not help but notice the tolls of pollution and environmental degradation: sprawling, cookie-cutter suburbs, the hulking ruins of the nation’s industrial might. But his direct engagement with the climate emergency began much later, on a trip to the 2005 United Nations Climate Change Conference, in Montreal, which became the subject of his book “When It Changed” (2008). “This was pre-Al Gore, and I went up there with the question ‘Is climate change real?,’ because in America there had been a vast campaign of disinformation by the oil and coal companies,” he said. “But, for everyone up there, the question was not ‘Is it real?’ but ‘Has it gone irreversible?’ I was utterly shocked.” Spurred on by the horror of this new understanding, Sternfeld immediately set to work on a new project, “Oxbow Archive” (2008), a collection of gorgeous large-format landscapes, made in a field in Western Massachusetts over the course of the following year and a half. The field became Sternfeld’s Giverny, and, like Monet, he tuned his viewers to the subtleties of light and the sweet sadness of the impermanence of things. 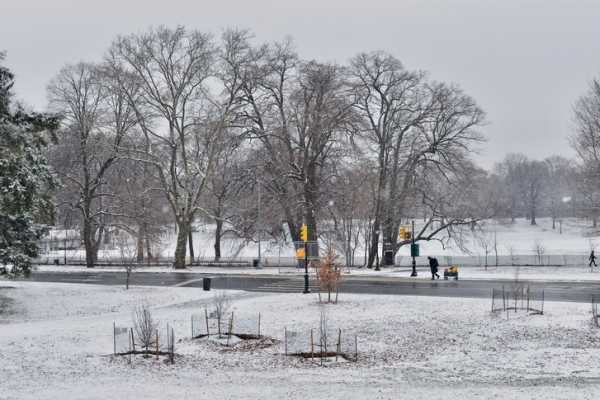 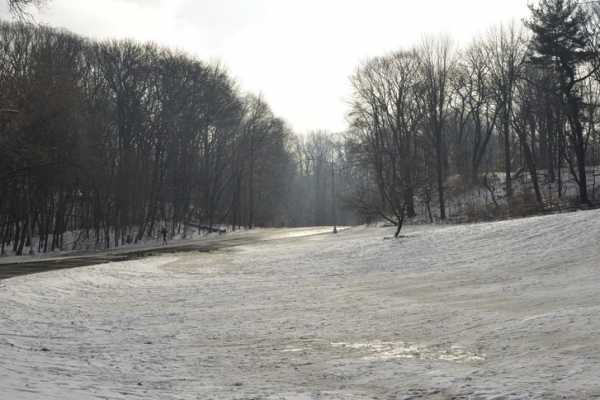 Of course, as Sternfeld well knows, climate change does not simply mean a threat to natural beauty. It means mass migration and political destabilization, rising tides and diminishing arable land, smog-choked air and acidic seas, forest fires and hurricanes, billionaires securing luxury bunkers under remote New Zealand fields and Jakarta slums being drowned by the sea. “In the end, I guess the same logic that I presume impelled David Buckel impelled me,” he said. “There’s no way to bring the gravity of the situation to people’s attention. Human life is in danger, and there’s no way to make it visible. The big tropes of climate change—starving polar bears, cracked earth in Africa, glacial runoff in Greenland—there are just so many of those pictures one can look at without becoming inured.” 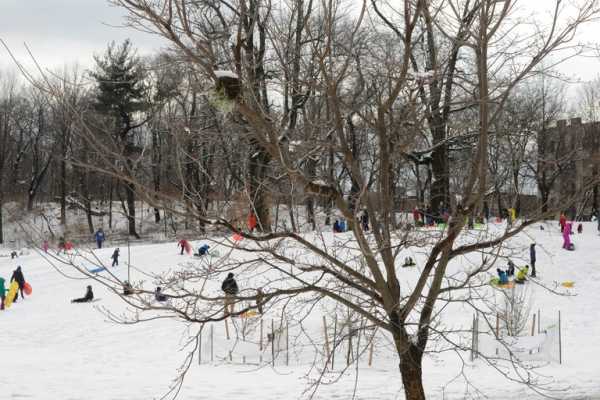 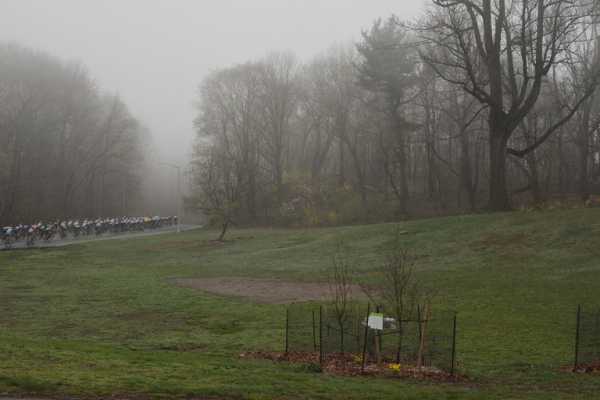 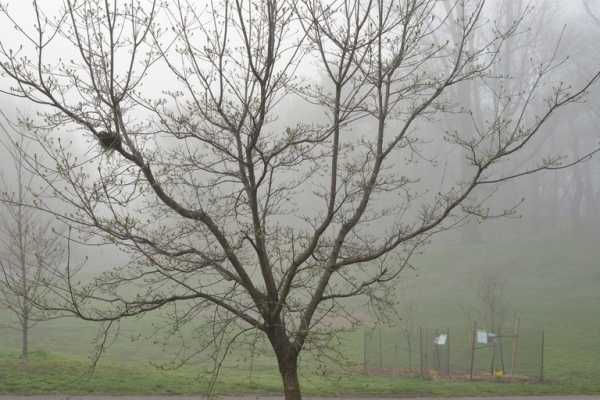 Sternfeld took pains to emphasize that, although he understands Buckel’s sense of desperation, he does not endorse his drastic act. “If someone else saw the book and felt encouraged to commit suicide,” Sternfeld said, trailing off momentarily. “I don’t have words for it.” Buckel was only sixty at the time of his death. He left behind a college-age daughter, a husband, and the lesbian couple with whom they co-parented. He also left the volunteers at the Red Hook Community Farm, where he was a beloved coördinator of one of the largest renewable-energy-powered composting operations in the country. Buckel was a student of Buddhism; in his suicide note, he referred to the contemporary rash of self-immolations carried out by Tibetans protesting Chinese rule. Knowing this, I can’t help but think of the Bodhisattva vow, an oath to live one’s life in service of the liberation of all living beings, forswearing one’s own liberation into Nirvana until that end has been achieved. Wouldn’t the world be a better, more hopeful place with Buckel still in it? Talking to Sternfeld, I began to see the pictures in “Our Loss” not simply as a memorial but as a kind of incantatory attempt to coax Buckel back into our world. “I wish I could have talked to him. I wish I could have gotten to know him,” Sternfeld said. “I wish I could have thanked him.” 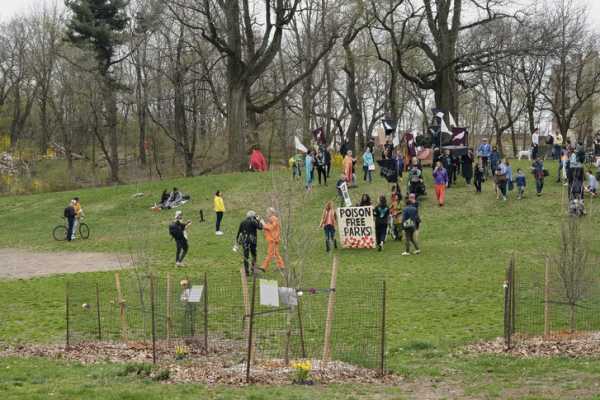 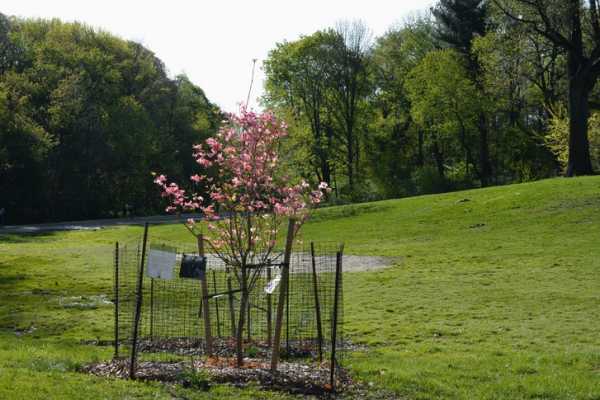 Champions Man City lift the trophy but are held scoreless by...

Pretending to Be Famous in The Sims |