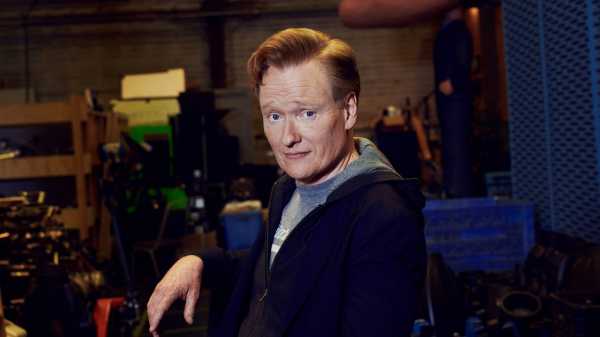 Conan O’Brien occupies the 11 P.M. time slot on TBS and an idiosyncratic position in popular culture. Having begun his hosting career, on NBC’s “Late Night,” in 1993, he is the elder statesman of his genre. Having been displaced from “Tonight,” a mere eight months after his ascension, he has the profile of a beleaguered folk hero. He is vaguely beloved and generally neglected. His most vital performance in the past year was as the subject of a Times story detailing his unanswered prayers of hosting Robert Caro. His show has the character of certain longstanding restaurants: you rarely eat there anymore, but you’d be sad to see it close.

Last week, after a three-month hiatus, “Conan” returned, for its ninth season, as a late-night show stripped down to its essence. Its running time is now a half hour. The monologue is now brisk enough to qualify as brief remarks, which is fine, as O’Brien has a limited appetite for topical comedy. On Wednesday nights, when “Full Frontal with Samantha Bee” airs as Conan’s lead-in, the shift from her righteous articulations of political disgust to his modest capering is startling, though I did enjoy a line, from his sidekick, Andy Richter, describing the tenor of the crowd noise at a Trump rally (“That’s what abandonment issues sound like”) and also the bellies on the puppets in a bit about national-park-dwelling squirrels growing obese during the government shutdown.

On his first night back, O’Brien acknowledged the crowd’s applause by pleading, “Ladies and gentlemen, we did not have time for that!” A sizable chunk of the new episodes has been devoted to the topic of their brevity and other elements of an underhaul—the jettisoning of the band, the replacement of the desk with a cocktail table—intended to offer a cozy and compact experience. The new format involves a dubious new wardrobe, with O’Brien abjuring suit coats in favor of, like, a trucker jacket, while nonetheless clipping a slender tie to a dark shirt. One night, he described his look as “cool biology teacher that sells weed after class.” The next, wearing a denim jacket over checks, he described as “farmer applying for a loan.” Self-deprecation is—in the tradition of David Letterman beaming when his jokes bomb and Johnny Carson humble-bragging about his alimony payments—a mainstay of “Conan.” These preëmptive critiques emerged from a fruitful pit of anxiety, as did Richter’s observation that the new set “looks like a strip club in Grand Theft Auto.”

The new format’s inaugural guest was Tom Hanks, who had nothing in particular to plug beyond his image as an avatar of American decency and benevolent patriarchy. They chatted, and they lingered too long on Hanks’s Instagram project of photographing lost shoes and gloves—bland dallying was in keeping with the generic likability of the whole appearance. Wednesday’s advertised guests were the cast of “The Good Place”—five of them, though not Ted Danson—and the visit was most compelling at its most awkward. Sporadic bouts of crosstalk. Nudging to talk philosophy. Everyone sat on stools, as if this were a panel discussion or a talkback. Jameela Jamil grimaced as she contended with the hem of her cocktail dress.

On subsequent episodes, the new “Conan” began settling into itself with the help of comedians. Thursday brought Bill Hader, Monday Tig Notaro. Each celebrity told stories about the fame of people who were more celebrated yet, with Hader making a meaningful contribution to the history of Lorne Michaels impressions and Notaro pleasantly saying nothing much about an Ellen DeGeneres birthday party. At this brief length, with this lack of airs and this practiced intimacy, this kind of thing is not disagreeable. It feels as if the whole of the new “Conan” is a special bonus feature available only to hardcore disciples, which is appropriate. It seems likely that “Conan” doesn’t have any casual viewers, only superfans and people who cannot find the remote.

The revamp has the aspect of a strategic retrenchment, as if the show is trimming back before it can be struck down. The audience for the traditional late-night carnivals is shrinking and aging. The average viewer of Jimmy Fallon’s “Tonight”—prized among the major shows for its relatively youthful demographics—is going on fifty-eight years old. Perhaps “Conan” is more sensitive to tremors in the entertainment landscape than its flashier peers.

The show must go on, but why must it go on for a full hour? Norman Mailer, writing about David Letterman in his 1994 Esquire profile of Madonna, intended an insult when he said, “At 11:30, when his audience is ready for a mild pleasure before bed, Letterman serves as their Ovaltine—a little flavor, a lot of pablum—and the implicit promise that nothing serious is going to take place.” But to venture the same about Conan’s relationship with his audience is to extend a compliment. It takes great skill to be so soothing, especially when herky-jerky absurdity is the basis of one’s act. Ovaltine is delicious, and O’Brien has found its ideal serving size.

Rain not spoiling the party as the Open returns to Portrush