Home Culture “The Society,” Reviewed: A Teen Dystopia, but with, Like, Socialism | 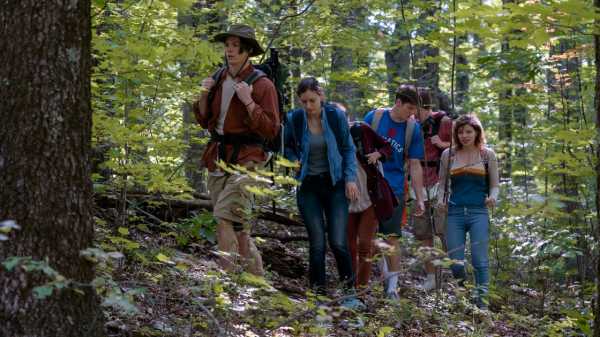 To borrow a popular meme construction, Netflix’s new teen soap “The Society” is “Lost,” but make it Connecticut. In the tony town of West Ham, a fictionalized Darien or Greenwich, or wherever else one-per-centers reside, the seniors at West Ham, a local high school, are tossing footballs across the green and leaning expectantly against their luxury sports cars. They are gearing up to leave this lightly supervised bubble of privilege for a new, collegiate one. But, before the Porsches can descend on Yale and Wesleyan, school buses cart everyone at West Ham High off to the woods for a camping trip. En route, inclement weather descends, and the lead bus driver turns his fleet around. When they arrive back in West Ham, in the dead of night, the youngsters’ iMessages won’t go through, and their parents are nowhere to be found. Cooler heads, like the overachiever class president, Cassandra (Rachel Keller), who purses her mouth like Tracy Flick, bite their nails, but the majority of the gang raid their parents’ liquor cabinets and rub fronts at a makeshift club inside the town church, where they blast Depeche Mode’s “Personal Jesus.”

The next day, the sun rises on crushed beer cans. The parents are still gone. A dense forest has grown at the edges of town, trapping its citizens inside. What are the abandoned to do, as the utopia turns sour? Start a . . . society! “The Society” was created by Christopher Keyser, a showrunner of the nineties’ network drama “Party of Five,” a thoughtful, service-y story about a family of orphans figuring out how to raise themselves. “The Society,” by contrast, is thoughtfully trashy, a “Lord of the Flies”—the SparkNotes version—made more in the image of “Riverdale,” with an unabashed horniness for sex, murder, and supernatural occurrences. Each of the ten episodes is an hour long, like an afternoon soap, and the abundance of characters we have to follow rivals a Westerosi family tree.

“The Society” revels in hammy mystery tropes and slapstick religious symbolism. Prior to the fateful night, strange things had been happening in West Ham: an off-putting smell, graffiti spray-painted onto a red-brick building façade. Grizz, a sensitive jock, is shook. “There’s no graffiti in this town,” he says. What there is, apparently, is advanced-placement classes in eschatology, because Grizz is able to translate the graffitied words, an Aramaic phrase from the apocalyptic Book of Daniel: “The writing’s on the wall.” The very first day of their new, unsupervised existence, one girl, Emily, the nascent society’s curious Eve, is bitten by a snake and dies from an allergic reaction to the venom.

Cassandra, the de-facto leader of the teens, is tenuously ironfisted. Her younger sister, Allie (Kathryn Newton, who plays the teen sourpuss Abigail on “Big Little Lies”), looks on with muted envy. Gordie, a biology genius pining for Cassandra’s attention, studies the skies for evidence of a parallel universe. Cassandra keeps the peace by pooling resources and allotting everyone a rotating job—garbage removal and floor sweeping, what regular people would call “chores.” This arrangement is unappealing to Harry, the pouty, Richie Rich son of the school principal, who knows more about their predicament than he lets on. Harry has a puppet master, a brooder named Campbell, who happens to be a cousin of Cassandra and Allie, as well as a total creep. Campbell retreats from Cassandra’s society, and abuses his girlfriend, Elle. His brother, Sam, who is deaf, signs to the crew that, as a child, Campbell cut off the wings of a pet bird. Campbell’s sneer is the face of a certain emotionless young white man whom the audience knows and fears.

But there’s an irrepressible optimism to this guilty-pleasure watch; the town-hall meetings, in which the kids earnestly debate the benefits of participatory democracy, gun restriction, and reproductive rights, would thrill Alexandria Ocasio-Cortez. Keyser has described “The Society” as a “kind of post-Parkland conversation about what this generation of kids is thinking, and how they’re interested in remaking the world in some ways.” The writers have clearly read the polls and trend pieces that declare that “Young Americans are embracing socialism.” Unrestricted debauchery has turned the spoiled kids of West Ham philosophical, casually Marxist, and the viewer is rewarded with throwaway one-liners from a Greek chorus of meathead athletes: “Are we in an episode of ‘Riverdale’ or Soviet Russia?” After one gruesome night of pillaging from a local market, some dudes lie on the grass and reflect: “I’ve been thinking—what if we didn’t, like, take stuff? Wouldn’t be the worst thing in the world. It could be, like, socialism. There’s no ‘I’ in team, right?”

As desert islands go, West Ham has fabulous amenities, and the wealth available to these survivalists provides unintentional comedy. The mansions are spacious, stocked with plenty of beds for semi-secret boning. The electricity works, giving the seniors occasion to keep up with their fitness at a state-of-the-art gym. Bottles of fancy cordials floweth. The supermarkets are stocked with artisanal snacks. Someone teaches an early-morning yoga class. What’s in lower supply is sanity. Early in the season, Cassandra decides to throw a prom, but—avoiding spoilers—on the night of the party there’s a murder. To stave off the collapse of their young society, Cassandra’s sister, Allie, becomes mayor, and flexes her latent dictatorial instincts. “This is a new place with no history,” she announces, calling their transformed home “New Ham.” She invents a police force. She creates a prison. She institutes execution. And, by the season’s end, the disgruntled society, in response, invents insurrection. This is social-experiment schlock, entertainingly mindless. But it’s no more clichéd than a certain other fantasy show about the maneuverings of power.