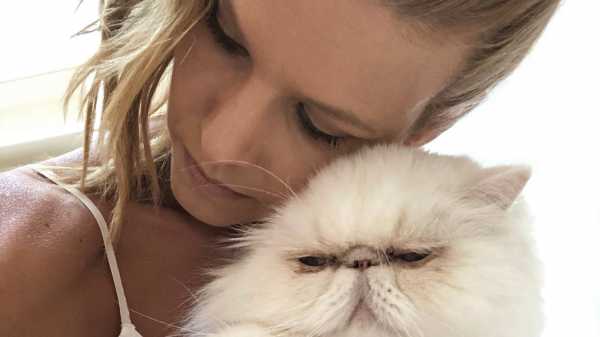 I was first made aware of Beth Stern’s cat-rescue work through a children’s book she wrote, which I gave to my daughter about three years ago. In “Yoda: The Story of a Cat and His Kittens,” the titular feline, a neglected, emaciated white Persian with a heart condition, is adopted from an animal shelter by “a nice lady named Beth” and brought to her house. There, as he heals, he quickly takes over the care and grooming of the rambunctious kittens she is fostering, leading the vet to announce that, now, “Yoda has a happy heart.” Stern is a longtime animal-rights advocate who also happens to be married to the radio mogul Howard Stern. When, shortly after encountering her book, I began following her Instagram account, I was delighted to see that Yoda was still thriving in her household, where he had taken on the role of elder statesman. In the past couple of years, many groups of foster kittens have been raised under Yoda’s watch, and with every new picture Stern posts he seems yet more resplendently fluffy and well groomed, with the world-weary expression of a Roman senator in exile. Looking at Yoda’s pictures, I always feel a swell of satisfaction, even pride, at how far he has advanced with Stern’s help, and, by proxy, with the encouragement of her followers, who number more than four hundred thousand and are almost fetishistic in their attentiveness. “Yoda doesn’t have any bad angles,” one writes. “It totally looked like Yoda was giving side eye but I think that may be just his sweet little face!” another comments.

Imputing human feelings and intentions to cats might seem sentimental or silly. But, once you decide to enter the Stern universe, it is difficult not to feel your sympathies extending outward. Most rescue and adoption Instagram accounts present their charges’ stories perfunctorily. Stern, in documenting her cat-fostering efforts, and also the lives of her own menagerie, offers the pleasure of observing these cats as they become round characters, with specific dispositions, histories, futures, and relationships. This is a cast of idiosyncratic characters embroiled in touching, gentle dramas, not unlike those of Barbara Pym’s mid-twentieth-century vicars and spinsters, forever having tea in their bedsits or attending a church jumble sale or falling chastely in love with uptight anthropologists.

Our staff and contributors share their latest cultural enthusiasms.

Though Stern’s life and household are caught only in glimpses on her account, we see enough of them to envision the whole as a kind of storybook haven, a world rich in both funds and care. Stern is a svelte, attractive blonde, but her potential bombshell status seems intentionally dressed down on Instagram, where she remains mostly in the background, seen only occasionally snuggling a kitten, smiling widely as she hands over a cat to its future adopters on its #foreverfamilyday, or wearing a cat-themed piece of apparel or jewelry. The rare non-cat-related photo of Stern is usually accompanied by the slightly old-fashioned hashtag #photobyhoward, as if to signal that she is a happily married woman only here for the cats. Howard Stern, a genius of raunch in his professional life, is also presented as a man with cat-family values: petting the cats, talking to them in his famously sonorous voice, snuggling with them while reading the Times. There is a wholesomeness to the project that I’d call almost relentless if I weren’t so seduced by its calming story lines.

One such tale involved the best friends Charlie Chunk and Sophia—the former a large, mild-mannered black-and-white cat and the latter a gentle, blind calico. When Charlie died of cancer, in August, 2017, Stern’s sadness was compounded by concern for Sophia, a worry that the account’s followers robustly echoed. Leon Bear, a long-haired black male, stepped up to take Charlie’s place as Sophia’s “man,” but, in the end, having lost “the love of her life,” Sophia succumbed to a broken heart and died, in April of this year. Recently, a senior foster, a calico named Grandma Marge, was adopted out to a family of cat lovers but died soon after, her body failing under the strain of years of neglect. Joy followed quickly when the same family welcomed another of Stern’s charges: Sunshine, a tortie suffering from an eye condition.

Delivering a soothingly cyclical stream of images of cats in various stages of life and health, Stern’s account takes on a Biblical rhythm, punctuated by the regular arrival of litter after litter of newborn kittens. Scrolling through the account, I’ve often felt a desire to be placed in a cat carrier and taken to the Sterns’ palatial “foster room,” where I’d be coddled and brushed, allowed to play with a string toy, and given premium wet food, before finally being tucked in for the night in a pillow-lined wicker basket. When posting her final Instagram picture of the day, Stern often adds the hashtag #goodnightandgodbless. I can almost hear her whispering it to me before she closes the door gently behind her.

What George H.W. Bush’s presidency says about Trump and Kavanaugh