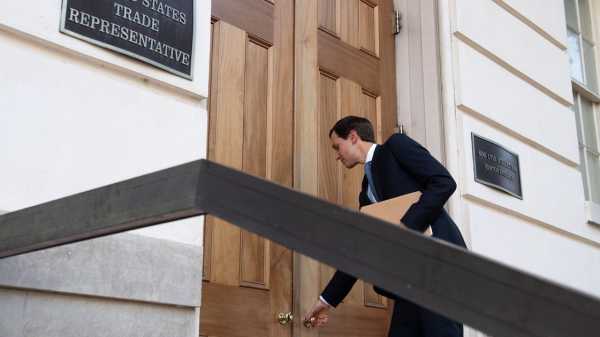 On Thursday evening, the White House senior adviser Jared Kushner arrived at the Winder Building, in Washington, D.C., to attend a meeting, reportedly focussing on NAFTA negotiations, at the Office of the United States Trade Representative. As he approached the building’s entrance, accompanied by a man wearing an earpiece, Kushner was accosted by reporters asking about Canada’s role in the trade agreement and wondering about his reaction to the Op-Ed by an anonymous Trump Administration official that had been published in the Times the day before. Kushner, predictably, did not respond to questions, but what could have been just another unremarkable interaction between Trump’s son-in-law and the press quickly became something much odder, and more revealing, as Kushner realized that the door to the building was locked, and that he was stuck outside it. For nearly two minutes—caught on video by Katie Simpson, a reporter for the Canadian Broadcasting Corporation, and then posted to Twitter—Kushner stood near-wordlessly at the entrance, his back to the reporters. Wearing a slim, dark suit, his neat-as-a-pin hair like an incoming prep-school freshman’s, he tried the door’s handle a couple of times; buzzed the intercom, waiting for a response that failed to come, then buzzed again; pulled out his phone and appeared to scroll through it, as useless as a man stood up on a first date, and then lifted it to his ear, speaking inaudibly. Finally, after what seemed an eternity, the door opened, and he was ushered in. Curtain!

Jared Kushner arrives at USTR. Doesn’t answer op-ed questions or NAFTA questions. Awkward since it takes security 2 mins to let him in. pic.twitter.com/g8WovN7H0v

In an Administration whose doings often take on the aspect of a horror movie, the incident was a welcome moment of pure slapstick, with Kushner in the role of the hapless Buster Keaton, his body awkwardly and hilariously thwarted by the physical environment around him. The pairing of the tall, slight Kushner and his stockier, squatter companion put me in mind of a vaudeville act. As I watched, then rewatched, the video, I almost expected to see a Steinway upright fall suddenly on Kushner, right then and there, a few paces west of the White House. But, as is often the case with silent-film physical comedy, there was also a hint of the dreamily surreal in Kushner’s predicament—something of a hushed, out-of-time, almost avant-garde quality. The stillness of the senior adviser was also mirrored by the reporters, who, after asking several initial questions, fell almost uniformly silent. Watching the video gave me the slightly uncanny sensation of time stretching to a crawl, as if I were observing seventies-era footage of a slowdown strike at a car factory, or a glacially paced Butoh theatre scene, in which every gesture and expression takes on a mysterious significance.

One’s true interiority is, by its nature, always something of an enigma to others. But Kushner, despite his omnipresence in our lives since his father-in-law’s campaign and election, might present an enigma more shrouded than most. So mum and obscure is he that, in June of last year, several months into the Trump Presidency, the Internet reacted in surprise and delight to what appeared, amazingly, to be the first time he had given a speech in public. (“Have you ever heard him speak?” John Oliver had asked, disbelievingly, in April, 2017.) And, despite repeated claims that Kushner, a metropolitan East Coast Jew, has attempted, along with his wife, Ivanka, to exert a modifying influence on the President—his own form of so-called quiet resistance—his supposed socially liberal, freethinking values have largely remained a throwaway abstraction, with little to no bearing on policy. Whatever could this blank slate of a person be thinking and feeling, I asked myself, as I watched Kushner standing dumbly at the door, disabled, if only for a brief period, from pursuing his apparently far-reaching and yet largely obscure role in his father-in-law’s Administration. This wasn’t even quiet anymore. It was, plainly, silence.