Home Culture “The Tale of Genji” Comes to Fifth Avenue | 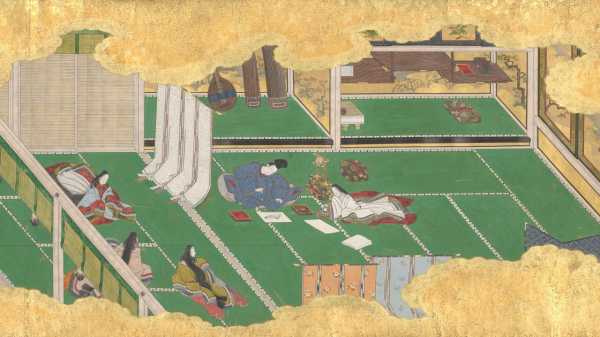 You don’t have to have read all of “The Tale of Genji”—the most recent English translation, by Dennis Washburn, is a thousand three hundred and sixty pages—to enjoy a rich exhibition, at the Metropolitan Museum of Art, of artwork that the novel has inspired. It does help to have read a little, though.

It’s a sign of Japan’s isolationism—or of a lack of curiosity from the rest of the world—that it took more than nine hundred years for what is probably the most celebrated work of Japanese literature ever written to be available in English. Arthur Waley published the first translation, in 1925, as a six-volume edition. Virginia Woolf reviewed the first volume (in British Vogue!), and she expressed her astonishment that, in the eleventh century, when the best that Anglo-Saxon writers were coming up with was stuff like “Sumer is icumen in, / Lhude sing cuccu,” this exquisitely crafted, supremely sensitive and perceptive text was being composed on the other side of the world.

There was a tiny bit of Orientalism in Woolf’s appreciation. She was appreciative, but she found the book’s appeal exotic and a little limited. Compared to Tolstoy, it lacked “force,” she said. But I think that was because she had read only the first volume. At that point, she could not have realized that beneath the novel’s meticulously layered depictions of court life in Heian Japan is a revenge plot worthy of Balzac.

The real Orientalism is how long it took for Western critics to register that “The Tale of Genji” disrupts every cliché about the “rise of the novel” that they were taught in school. For decades, the history of the novel meant the history of the European novel, which started in the eighteenth century. The novel was supposed to be a reflection of modern life. It told a story about everyday life and was written in everyday language. It put individual psychology and social interplay at the center of narrative. These attributes were said to reflect the emergence of a world that was increasingly mobile, secular, and democratic.

“The Tale of Genji” is a huge embarrassment to this historiography, because it has every one of those attributes, and it was written in a feudal, religious, and rigidly stratified society, radically dissimilar to the England of Daniel Defoe. It is written in a vernacular mode (kana); it is loved by Japanese readers of all stations; and it is psychologically realistic. It also features intertextuality, narratorial irony, recursiveness, and heteroglossia.

And “Genji” ’s subjects are the subjects of the novelistic tradition: Bildung, marriage and betrayal, revenge, and the frantic but elaborately masked competition for status. Like any nineteenth-century novel, such as “Middlemarch,” it is also an analysis of a social structure. It is a book that Jane Austen or Henry James could have written.

Except that it is much more beautiful than any novel written in English. Loving attention is given to the characters’ clothes, to their houses, to the quality of their calligraphy, to the foliage in their gardens, and to changes in the weather. And there are seven hundred and ninety-five waka—thirty-one syllable, haiku-like poems, written by characters to send to other characters—woven into the text. Oh, and it was written by a woman, Murasaki Shikibu.

Woolf, of course, responded to that part. She liked that we learn about the novel’s male protagonist, Genji, known as “the Radiant Prince,” even though he is a commoner at the beginning of the tale, through the eyes of the female characters. Murasaki subtly shows us that these women, unless they have the backing of a powerful man or enter a convent, are lifelong victims in a patriarchal world. To me, what is just as remarkable is Murasaki’s ability to represent, from the inside, the way men think—in particular, the way men justify to themselves actions whose motives they know to be ignoble and self-serving. She takes a scalpel to the male ego, even as she creates one of the great male characters in world literature.

The curators of the Met’s exhibition, John Carpenter and Melissa McCormick, suggest that the profusion of illustrations of the Genji story was a way of giving later readers access to the book and to the age in which it is set—much like illustrations of scenes from the Bible have introduced many people to the Bible. As they show us, this imagery was then often appropriated for other purposes—religious and political.

The exhibition, also titled “The Tale of Genji,” is essentially a history of the novel’s reception in the course of the past millennium. Murasaki is believed to have finished writing the book in 1019. Iconography based on the novel dates back to at least the thirteenth century and continues today. Genji remains a popular cultural hero in post-imperial Japan and can even be found in contemporary manga. (For a while, another “Genji” exhibition, mainly of prints, was running concurrently with the Met’s, at the Minneapolis Museum of Art.)

The reason it’s useful to know a little of the story is that the book is organized as a series of episodes, in fifty-four chapters, and each episode has its own iconographic tradition. There have been efforts to illustrate every scene—from a novel with close to five hundred characters. The detail is extraordinary. An attendant brushes snowflakes off an orange tree with a broom. A tiny figure makes his way toward the house of the exiled Genji, against the background of a stormy sea.

There is even a traditional way of representing Murasaki, who is usually drawn kneeling at her writing desk. But this not an exhibition only of pictures. There are samples of handwriting from the eleventh century and of highly wrought calligraphy that was used to transcribe later editions of the book; there are ornate scrolls in which the work was circulated (it was not printed until the seventeenth century); and there are illustrated fans, robes, lacquered boxes, and screens. For visitors who have had little contact with the cultural products of East Asia, spending an hour with these exquisite objects, which seem somewhere between fine decoration and fine art, feels a little like what Woolf described, a trip to an alternative universe. Even so, the story they are responding to is not completely unfamiliar.

Will US-Backed Separatists Manage to Create Autonomy in Southern Syria?