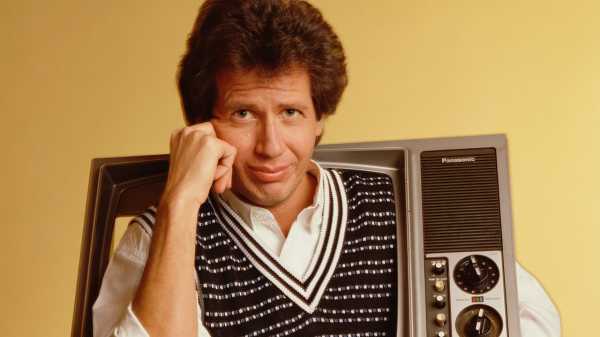 Fans of “Freaks and Geeks,” the high-school dramedy about Midwestern
teens in the early eighties that ran for one glorious season, on NBC, in
1999-2000, will likely remember what is, to me, its most indelible
scene. In it, one of the
titular geeks—the bespectacled Bill Haverchuck, played by Martin
Starr—returns home from school and slaps a grilled-cheese sandwich and a
slice of Entenmann’s chocolate cake on a plate. Bill is the child of a
single mother, a gawky and awkward latchkey kid, and television is part
of his solitary after-school routine—one that is, if not especially
invigorating, at least dependable when nothing else is. But then, for
once, something unusual happens: Dinah Shore, whose talk show Bill is
idly watching as he mechanically shovels his food, invites the young
comedian Garry Shandling to the stage. We don’t hear the jokes—the scene
is scored to the Who’s “I’m One”—but we see Bill experiencing
Shandling’s routine for the first time. His initial chuckle turns into
laughter, which then turns into a full-on, open-mouthed cracking up. To
viewers, it’s clear that Bill has recognized, perhaps for the first
time, that there might be a community of like-minded individuals
somewhere in his future.

Patron saint of the lonely and the alienated, Shandling, in his comedy
and in his person, showed that it was O.K. to hate yourself if you were
hilarious about it; that, in fact, there was something honest, even
honorable, about the endeavor; and that this honesty might even turn
into something like love—for yourself, for others, for the world. Judd
Apatow, who directed and co-wrote the Haverchuck-Shandling episode, was
Shandling’s friend and mentee until the influential comic died of a
heart attack in 2016, at the age of sixty-six. His latest tribute to the
comedian—“The Zen Diaries of Garry Shandling”—is a two-part,
four-and-a-half-hour documentary, on HBO, which uses extensive
archival materials to recount Shandling’s life and legacy, alongside
interviews with his comedy-community peers (Jay Leno, Jerry Seinfeld),
and younger friends and disciples (Sacha Baron Cohen, Sarah Silverman).
The through line is composed of excerpts from the handwritten diaries that
Shandling kept—which are both shown onscreen and read in mellifluous
voice-over by Michael Cera. In the documentary’s first moments,
Shandling is seen crouching on the floor of what looks like a TV room,
rummaging through dozens of old journals overflowing from a wooden
chest. “Here I’m on my way to Hawaii, and I say I like the weather,” he
says, reading from one of them. A beat, a grin that is also,
simultaneously, a grimace, and then, wryly, “So, you know, they’re
filled with that kind of depth you can’t get anywhere else.” Off-camera,
Apatow laughs, and Shandling continues, “I’ll let the whole thing go for
two installments of nine ninety-five, that’s where I’m at. But here’s
what you get”—he thumps the pile of diaries, suddenly more sombre—“my
entire fucking life.” For Shandling, this life was, on the one hand, a
near-worthless joke and, at the same time, something almost too
meaningful, its every single moment bursting with potential for growth
and self-realization.

Shandling was born in Chicago, but, soon after, his family moved to
Tucson, Arizona, hoping that the dry climate would improve the health of
his older brother Barry, who suffered from cystic fibrosis. Barry’s
death, when Shandling was ten, is figured in “Zen Diaries” as his life’s
structuring trauma. The repressed Shandlings didn’t discuss Barry’s
death, and Shandling, his friends say, never talked about his brother,
but excerpts from his diaries make clear that the loss was a wound that
never healed. “Nobody ever told me, let’s stay with the pain and walk
through it,” he writes in one entry. The work of comedy, Apatow
suggests, provided a lifelong avenue for Shandling to walk through that
pain, if by an indirect route.

After college, where he studied engineering, Shandling moved to Los Angeles,
where he became a successful young TV writer. But he wasn’t satisfied;
he wanted to find “a true life path,” as he noted earnestly in a diary
entry. In 1977, a car accident in which he was seriously hurt marked the
next turning point in the spiritual-quest narrative that “Zen Diaries”
lays out. There is something strange, almost perverse, about the attempt
to start over and find enlightenment on the comedy scene, which is portrayed in
the documentary as cutthroat and dispiriting. But, for Shandling,
standup was, from the start, a way to express his niggling anxieties
openly. He toured and performed incessantly, developing the persona of a
self-obsessed neurotic and charming audiences with his heightened
self-awareness.

Shandling, who reminded his ardent admirers that it was totally cool to
be a little bit ugly and neurotic and funny and smart, had a penchant
for jokes about hot stewardesses and nagging, nightmarish Jewish mothers, which left some of us with complicated feelings. Comedy, in Shandling’s
heyday, was a boy’s club, and, save for the inclusion of Silverman and
the inimitable comedy writer Merrill Markoe, the documentary reflects
this. (In her new
memoir about coming up in the industry, Nell Scovell recounts how Shandling,
reading a spec script of hers in the eighties, told her appreciatively
that she writes “like a guy.”)

As Shandling’s career turned back toward TV—this time, he was creating
his own shows—his understanding of female characters, and the complexity
of character in general, grew increasingly nuanced. One of his most stellar
contributions to both comedy and television was the
fourth-wall-breaking “It’s Garry Shandling’s Show,” which ran from 1986
to 1990, and in which he played a self-obsessed, self-doubting comedian
who is also aware that he is an actor on a sitcom, populating a set
alongside fellow-actors, and performing in front of a live studio audience. Another triumph was the truly brilliant talk-show satire “The Larry Sanders Show,” which ran
from 1992 to 1998, in which Shandling played the self-obsessed,
self-doubting titular character, a late-night host, who interacts with
the equally self-obsessed and self-doubting characters who surround him
behind the scenes. “Sanders” was great because of its downbeat
naturalism: its depictions of the everyday humiliations, frustrations,
and desires of people interacting under the ego-inflating and
ego-shattering conditions of the entertainment industry. This, as the
television writer Al Jean says in an interview, was “the dawn of what
they call the golden age of TV.”

The final hour of “Zen Diaries” sags. This might be because the
humiliations and frustrations that dogged Shandling for most of his life
relaxed their grip in his last decade: the magic that is needed to turn
mundane experience into art went missing. Shandling’s creative output
was lean, but he was happier. He wasn’t chasing Zen but embodying
it—mentoring younger comics, meditating, and getting increasingly deeper
into Buddhism. Speaking about “Sanders,” Shandling said, “some people
mistakenly think that’s a dark show about people trying to get what they
want. No, it’s a show about people trying to get love and that shit gets
in the way.” At the end of Shandling’s life, the documentary suggests,
love had won.

Consumers have filed thousands of complaints about the Equifax data breach....