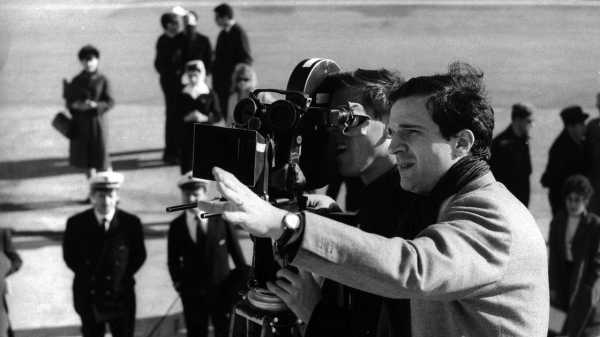 There’s no critical term more bedevilled than “auteur.” It’s used sometimes as an honorific, to praise directors with a strong artistic mark, and sometimes merely as a description, to suggest that directors bear the ultimate responsibility for a movie’s quality (or lack of it). It’s sometimes used as a power move to assert the responsibility of producers and studios to defer to directors’ ideas, and sometimes as an exhortation to critics to go beyond the corporate impersonality of a film to recognize the personal artistry behind it. In all cases, it suggests that the directors’ work is key to a movie’s artistic identity. But in a field that involves a collaboration between many artists, from actors and writers to editors and designers, the notion of the auteur is not intuitive. (Also, because it’s a French term, it suggests an air of élitist exoticism that itself elicits resistance or adherence for reasons beyond its actual meaning.)

A new, copious yet tightly focussed collection of the writings of François Truffaut, “Chroniques d’Arts Spectacles 1954-1958” (published by Gallimard), goes back to the source and illuminates the spark behind the term and the purpose that it serves. Truffaut gave the French New Wave its international launch with the success of his first feature, “The 400 Blows,” in 1959, when he was twenty-seven years old. Before that, he had been one of a group of young critics, along with his friends Jean-Luc Godard, Jacques Rivette, and Claude Chabrol, at the film magazine Cahiers du Cinéma, where they (along with an editor, Éric Rohmer) propounded the “politique des auteurs”—the policy or politics of auteurs. In practice, they wrote enthusiastically about the work of directors around the world—and also extolled new movies of many Hollywood directors working within the studio system.

In January, 1954, the magazine published a diatribe by the twenty-one-year-old Truffaut, two years in the making, called “A Certain Tendency of the French Cinema.” It travelled through the local industry as a revolutionary shot across the bow. There, Truffaut, the youngest writer in the group, depicted the French film industry as a virtual cinematic Sodom and Gomorrah of artistic iniquity, and rescued only eight filmmakers from the wreckage (Jean Renoir, Robert Bresson, Jean Cocteau, Jacques Becker, Abel Gance, Max Ophüls, Jacques Tati, Roger Leenhardt). His instant prominence–or, rather, notoriety—got him hired to write criticism for the popular, right-wing-leaning weekly Arts Spectacles. He also was scheduled to write, for Cahiers, a theoretical exposition of the politique des auteurs. Instead, in his weekly writings at Arts, he supplied his thoughts on the subject gradually, in more than four hundred articles and reviews between 1954 and 1958.

In these writings, Truffaut at first uses the term “auteur” in a literal way, to refer to “writer-directors,” who aren’t merely the realizers of a film but are personally responsible for its drama and dialogue. It’s an idea that appears to defy the division of labor suggested in the credits of movies, especially those of Hollywood films, where few directors were also listed as writers. Truffaut didn’t visit Hollywood at the time, but he met (and sometimes interviewed) Hollywood directors who came through Paris, and he got a sense of how much uncredited work major directors actually often did on the scripts that they filmed.

Crucially, Truffaut viewed authorship in terms of literal authority, of power, and he placed as much emphasis on the production of films as on their direction. He discussed at length and with enthusiasm the work of Hollywood directors who were also their own producers (such as Alfred Hitchcock, Otto Preminger, Robert Aldrich, and Joseph Mankiewicz). In asserting the generally low artistic level of France’s movies, he contended that only a “reform of production” would help. Truffaut sharply reproached established French filmmakers for complaining about pressure from producers or from official censors. He did so by outlining their option of self-production—and the specific practices of low-budget filmmaking that they could have employed whenever they chose. Those methods were radical ones. He praised Agnès Varda for making her first feature, “La Pointe Courte,” outside the system, and praised the American independent film “Little Fugitive,” by Morris Engel, Ruth Orkin, and Raymond Abrashkin.

Truffaut exhorted directors to take control of their own productions because he had a particular kind of movie in mind and contended that independent production would help to foster it. He anticipated this new style while writing about Roberto Rossellini’s 1954 film “Voyage to Italy,” which starred Ingrid Bergman and George Sanders but was made with a small crew on a low budget: “This film resembles those which we’ll shoot ten years from now, when directors the world round will have given up imitating novelistic form in favor of the filmed confession and essay.” He endorsed a low-budget political cinema that would look closely at the lives of the poor and the disadvantaged in a director’s own neighborhood or city.

In a celebrated 1957 article, “The French Cinema Is Dying Under False Legends,” Truffaut gave his readers—who also included the potentates of the French film industry—a primer in guerrilla filmmaking, calling for directors to raise money through the local equivalent of Kickstarter, as a “coöperative” of small private investors from outside the film industry, to shoot with borrowed cameras, to film outdoors to avoid lighting equipment, to rely on friends to contribute labor for a deferred payout, to coax passersby to serve as extras, and to buy film stock “illegally,” without the needed authorizations (as, he said, pornographers did). He concluded this article with a fervent, prophetic vision:

The film of tomorrow thus seems to me to be even more personal than a
novel, individual and autobiographical like a confession or an
intimate diary. Young filmmakers will express themselves in the first
person and will tell us what has happened to them . . .
The film of tomorrow won’t be made by functionaries of cinema but by
artists for whom the shoot will constitute a formidable and exalted
adventure. . . . The film of tomorrow will be an act of
love.

In the middle of this sermon, Truffaut slipped a sort of commercial: he noted that, if made on very low budgets, such films could make money distributed “solely in France or by reaching small groups in many countries,” and again cited “Little Fugitive” as an example.

Truffaut didn’t ignore actors. On the contrary, he wrote at length about actors he admired, such as Marilyn Monroe, Brigitte Bardot, and—above all—James Dean, and his insights regarding Dean’s originality have a striking prescience about the art of acting and about the culture at large. He likened Dean’s style of performance to rock and roll, and anticipated that a new generation would bring with it a similarly new style of movie acting with a new tone, emotional range, and gesture-repertory. The notion of youth—the rejuvenation of the cinema—was central to Truffaut’s critical ideas. He observed young people’s enthusiasm for audacious (and widely panned) films such as Ophuls’s “Lola Montès” as a sign of change. He observed the rise of art houses—and the large numbers of young viewers frequenting them—as a forerunner of a rising new generation of filmmakers.

In 1957, Truffaut decried what he considered the dire state of French film criticism, adding, “If the practice of criticism is admissible, it’s on the condition of envisioning it as a provisional job, a transitional phase”—transitional to making films. He affirmed the importance of recognizing directors’ “intentions,” and he also spent time on sets and in discussion, to understand how directors achieved particular results with actors, cinematographers, and set designers. A few months later, he announced, “It is probable that I will abandon criticism someday in favor of more creative activities.” He was working on his short film “Les Mistons” at the time; the next year, he’d begin work on “The 400 Blows.” In effect, criticism served Truffaut and his cohorts as an on-the-job version of film school, and the “auteurs” whose movies they studied and praised were, in effect, their professors and their mentors on the path to making the kinds of films that they dreamed of.

Taken as a whole, Truffaut’s writings from Arts Spectacles suggest that the word defines not a kind of filmmaker or an artistic hero or even the experience of recognizing a director’s personality in a work. Rather, it’s crucially joined to its “policy”: it signifies a practice, a vision, a historical arc in which the cinema is inscribed. Thinking about directors with imaginative sympathy, critics put themselves, so to speak, on the side of filmmakers, and they thereby do the same for their readers, placing the art of movies within their reach, as an art to be practiced locally and personally, by any means necessary. The Cahiers critics’ taste for Hitchcock, Hawks, Ophuls, Renoir, and other critically derided directors has been validated by the success and influence of the grassroots movies of the French New Wave. Similarly, the concept of the auteur has been validated not by the search for touches of distinction in this or that Hollywood blockbuster but by the centrality of independent filmmaking to the continued flourishing of the art.

Jorginho is key, and Eden Hazard could be No 9 for...

We have a new worst-case scenario for Obamacare