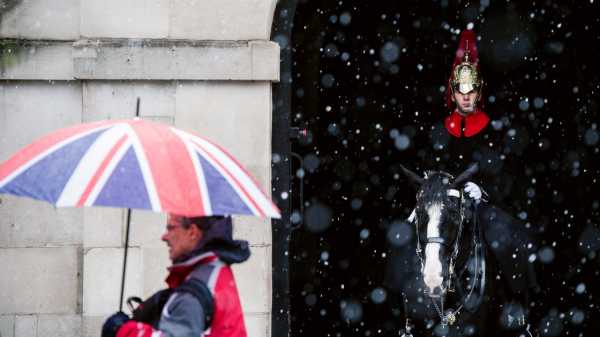 As Parliament, like the rest of Britain, heads into a two-week holiday recess—a national slow-down of turkey and mince-pie eating, in which ironic snowflake-patterned sweaters are worn, drunken games of charades are played, and relatives are argued with—the nation remains in a bizarre Brexit limbo. Like an unpopular child to whom the only gifts that Santa has brought are a square peg and a round hole, Prime Minister Theresa May enters the holiday period still stubbornly insisting that her exit deal from the E.U. is the nation’s best option, despite the unwillingness of almost any of her Parliamentary colleagues to play along and vote in its favor. Remainers, emboldened by growing support for a second referendum, are scanning the political horizon for signs that a People’s Vote might be turning from fantasy into fact, showing no less eagerness than children peering from bedroom windows in the hope of spotting reindeer on the rooftops.

Meanwhile, the contingency plans that are being laid for the very real possibility of a no-deal Brexit—the scenario in which Britain crashes willy-nilly out of the union without Parliament having been able to agree on the terms of Britain’s future relationship with the Continent—warn of a bleak midwinter’s reckoning. Thirty-five hundred British troops have been put on post-Brexit standby, and there is talk of the government reserving space on ferries to ship in food, and chartering planes to bring in European-manufactured medical supplies, including the insulin upon which May, like other diabetics, depends. These are all preparations that might be commendable were it not that the crisis they are intended to counter is entirely self-inflicted. Earlier this year, Britain solemnly observed the centenary of the end of the First World War, which, at its outset, was notoriously expected to last a few months, with everything over by Christmas. This Christmas, Britain is reckoning with the fact that it has committed a geopolitical blunder of epic proportions, and effectively declared war upon itself.

How, then, are the British to celebrate the season with appropriate good cheer and conviviality? How to eat, drink, and be merry while wondering whether one should really be stockpiling the Christmas pudding rather than consuming it? One way is to play a board game widely available in British stores, called “Very British Problems.” The game presents a catalogue of awkward scenarios—including “While washing your car, a neighbor walks by and says, ‘you can do mine next!’ ” and “Someone stops you on the street to say hello, but you haven’t the faintest idea who they are”—to which players are required to come up with the most British response possible. Most of the responses offered by the game’s designers suggest that the quashing of emotion is the default British reaction to any stimulus: the rejoinders to the scenarios above are, “Chuckle, mumble something incomprehensible, then feel annoyed for the rest of the day,” and “You say you must meet for drinks and then wave them goodbye forever,” respectively.

The game is part of a “Very British Problems” franchise, which also includes a series of stocking-stuffer books in which the crippling condition of being British is characterized. (Examples from the most recent volume include “Thinking you can run off a hangover and finding yourself in a field half a mile from your house, unable to move,” and “Nearly having a panic attack when you hear ‘Tickets please!’ as you sit in the correct seat holding your fully valid ticket.”) British viewers have also been able to enjoy, if that’s the word, a “Very British Problems” TV show, broadcast on Channel 4, which features celebrities and ordinary people describing and analyzing their own inhibited behavioral tendencies. “If you have ever tutted in a queue, worn an anorak on your summer holiday just in case, or apologized to an inanimate object, then you are suffering from Very British Problems,” is how the show introduces each of its themes, which have included how impossible British people find it to complain about receiving poor service: “I have cried after haircuts, but not once said to the hairdresser, ‘This is the worst haircut I’ve ever seen in my entire life,’ ” was one participant’s confession. Another show chronicled the phenomenon of adopting an exaggerated accent in certain social settings, or on the telephone, and then feeling obliged to maintain it well past the point of personal comfort.

“Very British Problems” began in 2012 as a Twitter account, @soverybritish, started by Rob Temple, then a freelance writer. It now has four million followers, and the account’s success depends upon there being widely shared agreement about what constitutes a British temperament, something that it would be hard to imagine being achieved in, for example, the United States. (It is debatable whether the impossibility of gaining an American consensus on what might be meant by Very American Problems is the nation’s signal virtue, or whether it is, in fact, the ultimate Very American Problem.) Very British Problems also assumes that prominent among those characteristics that British people have in common is a self-deprecating sense of humor—a sense of humor that sees incipient defeat, failure, and disappointment at every turn, and that operates on the principle that if you start out with low expectations there’s barely any distance for your hopes to fall. The phenomenon of crowd-self-deprecation is one of the mordant delights of British Twitter, which was exemplified in recent days by the deftly ironical responses received by a New York Times reporter who tweeted an invitation to Londoners to relate an instance in which they had victims of petty crime. These varied from “I did once see someone get off a bus without saying thanks to the driver. I didn’t bother reporting it as I know the police are overwhelmed,” to “Someone on the tube looked as if they were going to get off their seat but instead were simply rearranging their jacket. The trauma of the denial of a seat haunts me to this day.”

Still, it hardly seems likely that the much-vaunted British sense of humor, let alone the British tendency to suffer through indignity in the avoidance of making a fuss, will be sufficient to get the country through the next few months, now that the advent calendar countdown is coming to an end, and a more consequential deadline looms: March 29th, the date upon which, barring some New Year’s reversal, Britain is scheduled to leave the European Union, with or without a deal. It has been hard in recent times to imagine what news might possibly knock Brexit from the headlines, until this week when, as Parliament’s business drew to a close, Gatwick Airport was paralyzed for the better part of a day and a half by the inexplicable descent of drones, with all flights grounded and snipers deployed.

The emergency, in which no one was hurt, but more than a hundred thousand people were hugely inconvenienced, seemed a very British problem par excellence, and Theresa May expressed her commiseration: “I feel for all those passengers whose travel plans have been disrupted by this drone activity and the action that has had to be taken in response to it,” she said on Thursday, and issued a reminder that such activity is illegal, and punishable by up to five years in prison. Whether the Prime Minister is really in a moral position to condemn drone operators for deliberately seeking to induce chaos and sabotage the smooth running of everyday life is questionable, given the actions of her own government. The leaked Brexit contingency plans, according to a report in the London Sunday Times this week, include warning families not to book holidays for after March 29th, in case of a no-deal scenario in which all the country’s airports descend into mayhem of such a degree that being grounded by drones at Gatwick will seem like getting off lightly by comparison.

These will be sobering issues for the government to consider in January, when, like the people of Britain, its members return to work and routine. The New Year is a time for new resolutions: perhaps, once the shredded wrapping paper and the discarded party hats have been cleared away, some hitherto unforeseen path to agreement will become as clear as sleigh tracks in the snow. For now, a disorienting, almost giddy uncertainty—who the hell knows how this will turn out?—remains the only constant in a Very Problematic Britain. Merry Christmas, everyone.