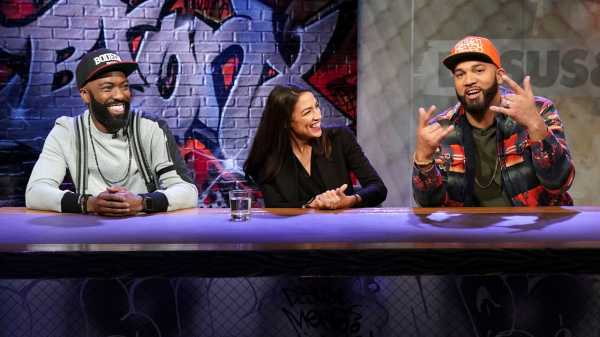 Desus Nice is the nom de guerre of Daniel Baker, whose creative partner, Joel Martinez, operates as the Kid Mero. Because the two of them are late-night talk-show hosts, it is tempting to describe them as comedians. But the freshness of “Desus & Mero,” which originated on Viceland and is now airing on Showtime, owes to how they don’t seem to be telling jokes so much as hanging out and joking around. The voice of the show is familiar, from barbershop persiflage, stoop-sitting smack talk, and barstool bullshitting.

They first found their formula—hashing over celebrity gossip, the hip-hop scene, and sundry bits of news and gossip—on “Desus vs. Mero,” which was broadcast online at Complex TV. They perched at a rostrum contrived from stacked milk crates and a broken-down corrugated box. Analyzing viral sensations and cultural infections, they were like Statler and Waldorf in snap-back ball caps, or a version of Beavis and Butt-head elevated by eloquence and grounded in Bronx-born street wisdom. Later, on Viceland, they attracted better guests and entertained them with frank questions. When Hannibal Buress came on to promote “Tag,” which was a feature film on the theme of the playground game, Desus asked, "First time they reached out to you, was you like, ‘Is this some bullshit?’ ”

Their verbal wit supplies the pleasures of precision. Desus has an easy elegance to the architecture of his anecdotes and synopses; Mero combines a gift for exact diction with a delightful range of reference. In the first episode of the team’s current podcast, “Bodega Boys,” he told of floating, stoned and starstruck, through the MTV Video Music Awards, and he devised an unforgettable simile for the intimidating build of Kanye West’s bodyguard: “This dude looked like a duck blind.”

On Thursday night, “Desus & Mero” premièred with a set evoking a compromise between a bare bachelor pad and an elevated subway station. A taped sketch found them introducing the show—“Late night for the people!”—to a classroom of dubious grade schoolers. One of the kids heckled, “You guys seem a little too ghetto to be on TV.” They don’t, but their fluency in under- to working-class styles of life is among their assets; it is asphalt essential to their evocation of the city.

They were sharp in combing through tidbits about the rosé habits of Malia Obama, the judo stance of Vladimir Putin, and the legal affairs of Tekashi69. In discussing the blown-out shoe of the Duke basketball player Zion Williamson, Desus said, “If you are an immigrant child and your parents got your sneakers from Payless, you know this pain.” Most remarkably, they managed to keep pace with the absurdity of a music video in which a rapping bottle of fentanyl exhorts a drug company’s sales force to move more product. Their contribution to pre-Oscar festivities was a work of amused disgust targeting “Green Book”; a faux trailer advertised a remake rated WG—“for white guilt”—and glorying in “the story of a white man who had the courage to know a black person.”

The guest was Representative Alexandria Ocasio-Cortez, from the Bronx, who was generally charismatic and specifically unremarkable, but I did like the part when Mero asked her to illustrate the concept of marginal tax rates, saying, “Seriously, though, please look straight to camera and explain the tax shit for the dumb motherfuckers.” A taped segment included a visit to her office, in Washington, D.C., which the Bodega Boys decorated by hanging a display strip of plantain chips. The show, like the snack, is salty and slightly sweet, and its crispness is a sign of its authenticity.

NRA losing corporate ties amid calls for boycott in wake of...

How social media became a weapon of war

What Manafort’s reported plea deal talks with Mueller might mean