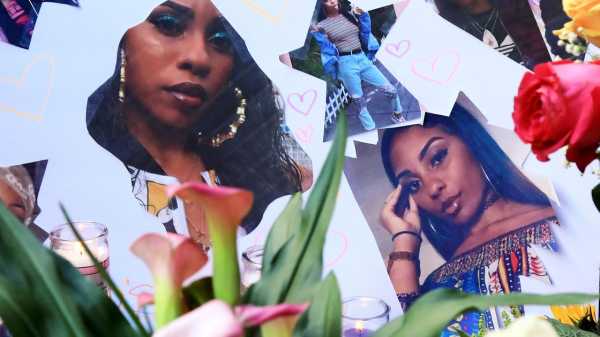 On the night of July 22nd, an eighteen-year-old black woman named Nia Wilson and her older sister Lahtifa were exiting a BART station in Oakland, California, when a man suddenly approached and stabbed both sisters in the neck with a knife. The women were on their way back to Oakland after attending a party at their aunt’s house, in nearby Concord. Nia bled to death on the platform as Lahtifa, who suffered less grave injuries, attempted to soothe her: “We’re gonna get through this. I got you, you’re my baby sister.” Witnesses have said that Nia’s torso became rapidly soaked in her own blood. With a gauze bandage on her neck, Lahtifa told ABC News the next day that she had glimpsed the assailant wiping down his weapon before he dashed out of the station. Less than twenty-four hours later, a manhunt by the BART police ended when officers acted on a tip and apprehended John Lee Cowell, a twenty-seven-year-old white parolee. Camera footage showed that he had been riding the BART system back and forth in the intervening time.

In the past week, I haven’t been able to go very far online without encountering Nia Wilson’s face. Artists have rendered her selfies in saturated colors, or bordered her image with flowering mandalas. Searching #NiaWilson yields thousands of memorials; celebrities including Viola Davis and Anne Hathaway have called attention to her death. Wilson was naturally gorgeous, and her skill with makeup only enhanced her beauty. She was a cheerleader. She was trained in CPR. She was thinking of joining the military, maybe eventually becoming a paramedic. She was a budding rapper; at a vigil held the day after her killing, which drew thousands of mourners, people danced to one of her songs, which had an unmistakable Bay Area energy. We now know Wilson, and we will never know her. The details of her killing are particular in their horror, but her death also brings into brutal focus multiple American crises.

For instance: the C.D.C. has found that black women die by homicide at nearly three times the rate that white women do. In the immediate aftermath of Wilson’s killing, some members of her family, and of the larger black community, expressed uncertainty that the police would find her killer at all. Their mistrust was not unfounded; the Washington Post has identified “pockets of impunity” in American cities where police often fail to solve homicides. Oakland has two such clusters. In a 2007 essay titled “The Missing White Girl Syndrome,” Sarah Stillman described how certain victims—typically white, upper middle class, and beautiful—become “worthy” of public fascination. The diligent mourning of Wilson on Instagram and Twitter is a shrewd and agonizing kind of revisionism: the ubiquity of her smiling face reframes the cultural devotion to the innocent and beautiful dead girl, who has not previously been imagined as having brown skin.

There is a blinkered symmetry to the way Americans have been taught to understand violence that is gendered and violence that is racialized: the victims of the former are white women; the victims of the latter are black men. The same violence, when visited upon black women, falls outside the recognizable parameters of victimhood, and thus fails to register. According to a study by Washington University published earlier this year, black women are more likely than any other demographic to have been unarmed when killed by law enforcement. (The #SayHerName hashtag, which has been used in recent days to mark tributes to Wilson, originated in the summer of 2015, to amplify the outcry over female victims of police brutality.) Black transgender women are murdered at a disproportionately high rate and have an abysmal life expectancy, a fact that is treated as an aberration rather than a systemic ill. As Linda Villarosa reported in the Times Magazine earlier this year, black women are three to four times as likely as white women to die in childbirth. And violence against black women is an often neglected part of our national history. In April, on the occasion of the opening of the National Memorial for Peace and Justice, a commemoration of lynching victims, in Montgomery, Alabama, the Yale scholar Crystal N. Feimster, drawing on the journalism of Ida B. Wells, wrote in an Op-Ed for the Times, “When most Americans imagine lynching, they envision the tortured and mutilated body of a black man accused of raping a white woman. They rarely think of a black woman ‘stripped naked and hung.’ ”

The Alameda County district attorney is exploring whether Cowell, who has been charged with first-degree murder and attempted murder, should also face hate-crime charges. But hate crimes are notoriously difficult to prosecute. (Unless, perhaps, you are a police officer: last year, Texas passed legislation that will make attacking a police officer a hate crime; more than a dozen other states have introduced “Blue Lives Matter” bills.) As of today, Cowell hasn’t been tied to white-supremacist organizations. His past convictions were for battery and robbery. Cowell’s family, with whom he has a distant relationship, said in a statement that he suffered from untreated bipolar disorder and schizophrenia. The San Francisco Chronicle reported over the weekend that Cowell and a black friend of his have matching tattoos. But casual, or even profound, camaraderie with the other is not inculcation against racism. What cannot easily be accounted for is the kind of racial hatred that is ambient or unconscious, that goes unsaid. “They are trying to say that he was sick and crazy,” Wilson’s oldest sister, Malika Harris, told the Times. “It was an act of racism.”

Wilson had a job interview lined up for the last week of July. She wouldn’t tell her sisters where, but she mentioned that she was nervous. She had also been planning to attend a party to commemorate the birthday of her high-school boyfriend, Josiah Pratt-Rose, who drowned in a lake, in 2016. Right after Pratt-Rose’s death, according to the Times, Wilson was at a street vigil for him when shots rang out and Reggin’a Jefferies, a girl who had been standing next to her, collapsed. Wilson stayed with Jefferies as she lay dying from a bullet wound to the neck. Until last week, Wilson had managed to thrive amid the ricocheting hazards of American life. Her killing is not, as Oakland’s mayor, Libby Schaaf, said, “senseless.” It is not, as implied by the San Francisco Chronicle’s headline (“Divergent Paths Met Tragically on Oakland Platform”), the result of some awful serendipity. It is a measure of how this country values the lives of black women.

Sunday on ‘This Week’: Sen. Doug Jones and Andrew Young

The Chaste Optimism of “Love, Simon” |

As Nike’s Hi-Tech Shoes Allowed in Tokyo Olympics Will There Really...