Home Culture “The Wizard of Oz,” the Last Munchkin, and the Little People Left... 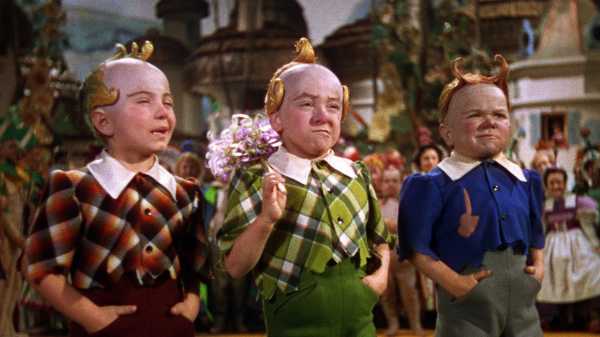 When the last lingering Munchkin from “The Wizard of Oz,” Jerry Maren, died in May, at the age of ninety-eight, I took the news harder than I had thought possible. “People come and go so quickly here” is the camp one-liner from the movie, but Munchkinland was one place where people could be relied upon to live forever. A hundred and twenty-four little people were employed in the making of “Oz,” and the survival of a few dozen of them long after the deaths of the movie’s gaudier alumni—Judy Garland, Bert Lahr, Margaret Hamilton—sometimes felt cosmically deliberate, a masterstroke of mythic structure. We have always relied on mortals to attest to the acts of the gods, and the ex-Munchkins cottoned to their role as a sort of ever-dwindling Greek chorus, riding on parade floats and pontificating about the meaning of “Oz” on television. “We finally got recognized,” Maren explained, in 1989. “You know, after everybody else died, they said, ‘Who’s left?’ ”

As the central member of the Lollipop Guild, Maren’s claim to Munchkinhood was the strongest, and he became a familiar screen presence for me. My teen-aged summers were usually spent jobless and alone, watching Turner Classic Movies in my basement, as if it were a bunker for laying low until it was 1932 again. The documentary “Memories of Oz” was in heavy rotation then, and it offered a thin soup of secondhand testimonials from John Waters and the spawn of the original stars—until, finally, cathartically, Maren appeared, warbling the Yip Harburg lyrics that were his birthright and gnawing on a cigar as though he were worried he wouldn’t absorb all the nutrients.

I had come to my bunker to pray, and Maren was “a piece of the true cross,” as the original C-3PO, Anthony Daniels, once called himself. His tales of filming “Oz” were shopworn but full of humanizing little details: between takes, the eighteen-year-old Maren played with a small hunk of clay (modelling was his hobby at the time) while M-G-M technicians mopped up the water that was perpetually leaking from the Munchkinland pond onto the Yellow Brick Road. When asked about Judy Garland, he’d say, “I thought she was going to be a toughie, but she wasn’t.”

Journalists who spoke to ex-Munchkins did it strictly from hunger, but, in the rare instances that they went deep, an almost unbearably poignant narrative emerged. Dwarfism was widely misunderstood at the dawn of the twentieth century, and many of the little people of “Oz” had emerged from medieval childhoods: their parents had immersed them in barrels of coconut oil, force-fed them to promote growth, and strapped them onto stretching racks. One peasant family sold their daughters to a travelling dwarf impresario at a hundred and fifty dollars a head. Walter Bodin and Burnet Hershey’s little-people exposé, “It’s a Small World,” from 1934, reflects the attitudes of the era, with vague talk of “our mysterious glands” and a litany of infantilizing stereotypes. “The authors have met many midgets who are constant consultants of Ouija boards, star seers, and crystal gazers,” Bodin and Hershey write. “They lug phonographs and radio sets about, ever prepared for a revel . . . . Many midgets are amazingly vain . . . . They are suspicious, given to small jealousies . . . and are extremely partial to ‘parties’ which last far into the night.”

Maren was spared the most draconian growth treatments of the day, but his memoir, “Short and Sweet,” published in 2006, recounts a childhood of tragic isolation. His immigrant parents spoke mostly Italian, which he couldn’t understand, and his ten older siblings were all average-sized. Until Maren boarded an M-G-M-chartered bus bound for Culver City in November, 1938, he had never seen another little person. “My eyes lit up,” he wrote of that first sighting. “I wondered if they walked like me. Did they have a high-pitched voice like me? Do they eat the same things as me?”

Gay people, trans people, little people: we’re all born in helpless diaspora, and reconstituting the dandelion is the dilemma of our lives. For the hundred and twenty-four little people who descended on the set of Munchkinland, it was a moment of homecoming. When the dwarf Hazel Resmondo walked onto the soundstage, she wept. Several little people met their husbands and wives while making the film, and others formed lasting friendships. “The experience made me feel like maybe I wasn’t so bad after all,” Fern Formica, who played a Sleepyhead, said, in 1991. “Maybe I was as good as anyone else.” According to the activist Billy Barty, the unprecedented congregation of little people on “Oz” led to the formation of the Midgets of America advocacy group; now known as Little People of America, it boasts more than six thousand members.

It’s almost entirely untrue. Aljean Harmetz, a longtime Hollywood correspondent for the Times, debunked the rumors in her authoritative book “The Making of ‘The Wizard of Oz,’ ” though she admitted that “there were among them a few promiscuous women, a few sexually aggressive men.” The only contemporary evidence of Munchkin misbehavior is a December 30, 1938, memo from the production manager Keith Weeks concerning the potential dismissal of two bad eggs: Charley Kelley, who had assaulted his wife, and another dwarf (either Gus Wayne or Leon Polinsky), who had “tried to knife [an] assistant, Mr. Torelli, in an altercation.” But the legends of widespread Munchkin debauchery were too seedy and captivating to disregard; they came up in every interview that Jerry Maren did. “That’s a lot of hooey,” he told the Times, in 1997.

In 1971, the poet Ted Hughes described the uncanny afterlife of tabloid stories, writing, “For your readers, it’s five interesting minutes, but for us it is permanent dynamite.” Garland’s tossed-off anecdote was a kind of dynamite, and the Munchkins spent the rest of their lives trying to defuse it. After a darker version of Garland’s story surfaced in the press last year, the Australian writer Gary Nunn wrote that he’d “spent the best part of the last fortnight urgently trying to track down” Maren—by then suffering from dementia—for an official statement.

One victim of M-G-M’s discriminatory casting policy was the African-American tap dancer Crawford Price. In the only photograph I can find of him, from 1938, Price is pictured alongside five other members of Henry Kramer’s Hollywood Midgets. At twenty-five, he is trim, suspendered, and preternaturally grave, with a perfect Harvey Comics nose. Due to his race, Price was the only performer in the photo not enlisted for “Oz,” despite a dire shortage of trained dancers among the little people. M-G-M wound up hiring amateurs and shunting them to the rear of the soundstage, where nobody could see them bungling the choreography.

There’s no way of knowing how Price felt about this, or how he filled his days while Jerry Maren and his ilk were on the Metro lot, bonding and learning their blocking and methodically hunting down Clark Gable. For Margaret Pellegrini, colloquially known as Popcorn, the experience was heaven-sent. Just fifteen when she began filming “Oz,” Pellegrini made garrulous public appearances well into her eighties, usually wearing a flower-pot hat and retailored versions of her original Munchkin duds. (Her motto: “Costumes go over big.”) “Every time I go to the bank,” she once boasted, “someone comes up to me and asks, ‘Were you in ‘The Wizard of Oz’?” Reading that, I immediately thought of Crawford Price. The indignity of being asked that question every week and having to answer “No” can scarcely be imagined.

Perhaps this is why a number of dwarfs resorted to posing as ex-Munchkins (and, later, as ex-Oompa Loompas). While researching his book “The Munchkins Remember,” the writer Stephen Cox found himself repeatedly unmasking frauds. In 2005, the Reno hairdresser Ezzy Dame went on a mea-culpa press tour after his thirty-year Oompa Loompa scam was exposed. “There is something so special when a child looks at a little person and they’re not scared,” Dame explained. “When you say you played that part, they look at you and smile. They see you as a human being . . . . It was a little white lie that became my nightmare.”

The historical record is mum on what lies Crawford Price might have told to survive. He got steady work as a dancer through 1939, according to a U.S. census, and a few years later Billboard magazine praised the so-called sepia midget for his “fast tapping” in a Rio Cabana floor show. When, in 1941, he danced in a stage revue featuring many of the little people from “Oz,” the Mount Carmel Item reported, “Price is undoubtedly the most accomplished performer on the bill.” But Price eventually left show business. He never married, and died in Dallas, aged sixty-two, of complications from chronic alcoholism. Is it absurd to think that appearing in “The Wizard of Oz” might have changed his life? Billy Wilder once said, “You’re as good as the best thing you’ve ever done,” and Price would have always had his Munchkin credit to cling to, a buoy in choppy seas.

For Jerry Maren, “Oz” was a career maker. Upon completing his Munchkin duties, in December, 1938, he was immediately cast in the Our Gang short “Tiny Troubles” (in one memorable scene, he beat Alfalfa with a frying pan). He worked regularly for the next sixty years, in everything from “Star Trek” to “Seinfeld.” Dignity did not appear to be a guiding concern. He midget-wrestled under the name Baby Face Maren and arrived wearing a diaper to Jimmy Stewart’s bachelor party (his job was to bellow “Daddy” and urinate on Stewart, with the help of a trick syringe). He was quizzed about dwarf porn on the first episode of “The Daily Show with Jon Stewart,” and consented to do a segment on “The Man Show” in which he was pushed on a swing by what he described as “half-nude big-breasted girls.” In “Short and Sweet” Maren seems curiously indifferent to the humiliations heaped on him, explaining, “If the job is brief enough and there are no lines to memorize, I’m there.”

Not all the little people of “Oz” were so resilient, and many desperately wanted lines. Addie Eva Frank, one of the Munchkin villagers, thought of herself as a serious actress, and refused to mingle with “show midgets.” Nita Krebs, who danced in the Lullaby League, sometimes cried in her dressing room after performances, fearful that vaudeville audiences saw her as a “cute little thing” and not an artist. Neither were able to transcend the brutal small-mindedness of the era (and they probably wouldn’t be able to transcend it today; the plight of little people in show business has not materially improved). Still, at least they had “Oz.” All of the Munchkin performers are gone now—with the exception of a few child ringers who supplemented their ranks—but their memories are enshrined in endless books, documentaries, and YouTube videos. Crawford Price only survives in a handful of press clippings that refer to him as a “sepia midget.” The phrase is unintentional poetry; it seems to imply that Price was stranded in Kansas forever. I think I’ll miss him most of all.

Here are the lessons learned as Man City sweep aside Man...

James Charles and the Odd Fascination of the YouTube Beauty Wars...