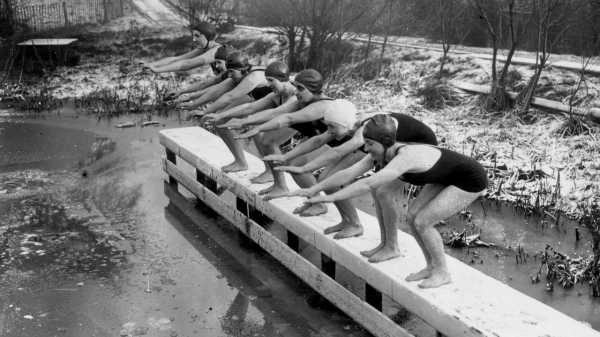 There are thirteen hundred and forty-eight names on the winter register of the Kenwood Ladies’ Pond Association, a voluntary organization for “women who care about the pond,” the pond being a small, women-only swimming hole in London’s Hampstead Heath. According to the organization’s co-chair Nicky Mayhew, the number has grown in the past decade and reflects the current British enthusiasm for “wild swimming.” In summertime, the water is heaving, and every spot on the green around it is covered with young women—topless, smoking, reading, and eating from Tupperware. But the association estimates that there are only about a hundred and fifty women who swim regularly through the winter season, which begins when the water temperature drops below twelve degrees Celsius, usually around mid-September, and a rope is threaded between buoys to cordon off the pond’s further, murkiest edges.

On a Tuesday morning in December, a clutch of women, mostly in their fifties and sixties, were half naked, clutching quick-dry towels and fuzzy bobble hats, which a few kept on while swimming to avoid losing body heat. A lone swimmer was doing a determined crawl far out near the limit rope, gasping with every second stroke, while, closer to the ladder, three women wearing hats and floral swimsuits tried to catch their breath. Julia Dick, a sixty-three-year-old former lawyer, was going hatless as she lowered herself into the pond, as she does every other day, in a black-and-white geometric swimsuit from the now-shuttered high-street staple British Home Stores. “I like to feel the fresh air on my head when I swim,” she said.

Dick co-chairs the Ladies’ Pond Association with Mayhew and has the manner of an ideal sports teacher, with a toothy smile and a tuneful, encouraging voice. “I put on my swimming costume and I walk across the Heath,” she told me later, after she had dressed in thermals and a woollen jumper, as we walked toward the coffee shops of Swain’s Lane in Highgate. “The idea that you would come home without going swimming is just preposterous.” The pond is never the same, she said, but is always beautiful. For many of the women who come here day after day, year after year, it has become a special kind of oasis. “It’s a welcoming space,” Dick said. “The pond can support you through crises. It helped me with the death of my parents. And with menopause, all the mood changes.”

To outsiders, the pond is hardly inviting: at the entrance, a sign reads, “Women Only. Men not allowed beyond this point,” followed by, “This water is deep and cold. Competent swimmers only.” A long path beneath a canopy of trees takes you from the gate to the water, and a small chalkboard outside the lifeguards’ station advertises the temperature: usually six degrees Celsius (42.8 degrees Fahrenheit) in November, maybe three or four in December, one in January. A good rule for winter swimming is to never stay in for more minutes than the number of degrees it is in the water. When it falls to almost zero, you lower yourself in and then hurtle from one metal ladder toward another, a few metres away, so that you’re practically out before you’re in.

When Anne Burley, who is eighty-two, began winter swimming at the Ladies’ Pond, more than thirty years ago, there were just a handful of women willing to bear the cold and the lack of hot showers. There were only two lifeguards, who did alternate shifts. “If they were in a good mood, they would bring you a little bucket of hot water, which they had to boil up, and we’d all take our turn at dipping our feet in it,” she told me recently by phone. Today, a small wooden hut contains a handful of private changing rooms and four showers—two hot, two cold. (After a winter swim, even the cold shower feels warming and luxurious.) There are always a few lifeguards on duty, who nod as you approach the water, checking with women they haven’t seen before that they are prepared for the temperature. “You get a bit resentful in the summer when the pond is crowded with ‘other’ people,” she said. “But we try and repress these unworthy instincts and be more welcoming.”

Burley walks twenty minutes from her home in Highgate to the water’s edge, where she has swum every day since 1980, “give or take a year I spent in Croatia, working for the U.N.,” she said. Others come from Bloomsbury, Stoke Newington, or Camden. For a while, one woman cycled from Battersea every day, ready for the pond to open, as it does all year round, at 7 A.M. Burley told me that she never made a decision to swim through the winter. “I just thought, I’ll go on for a bit longer,” she said. “Then by the time it gets really, really cold, your body gets used to it. It’s so much a habit with me now. It’s what I do. I wake up in the morning and I go and swim.” A man-made pool doesn’t compare, she said. “It’s just so boring. You go up and down. Whereas the pond, you go in different directions, and around, and you can look at things while you’re swimming.”

I first swam in the pond three years ago, in July, initially to see if I could overcome my fear of venturing into any body of water in which my feet couldn’t quickly find the ground. I went back each week, refusing to break the routine, largely out of stubbornness. Once September had become October, and then November, the thought of giving up felt like accepting some defeat. Like all the women, I wore a bathing suit but added some neoprene socks once the temperature dropped below ten degrees. Slowly, my body acclimatized, muting the feeling of a thousand stabbing pins, and now I go barefoot.

As you swim more regularly, the pond ladies come to recognize you. They offer approving nods when you emerge and bits of advice. “I love the older women there,” Toby Brothers, who has swum every winter for ten years, said. “They’re partly why I do it. Our culture deals so badly with aging, and the pond community is full of these shining older women.” She recalled their regaling her with the benefits of pond swimming—for your skin, your heart, your confidence. In her first year, she said, “One of them said to me, ‘It makes sex better.’ ”

European friends can’t understand the appeal. The cold, they say. New Yorkers, used to outdoor pools that close in early September, when the weather is still balmy, are even more confused. Are there eels, they ask? Fish? So, it’s really just a pond, they say—apparently hoping for a mention of a tiled bottom, or entry barriers. In the past, if the pond froze over, the lifeguards would crack open the ice, making a hole for swimmers. These days, women are welcome to instead take a trip over to the Men’s Pond in search of moving water. One day early in October last year, the changing rooms at the Ladies’ Pond were being fixed, so I went with several other women, pushing open the gate boldly marked “Men Only.” By the water, there was a frisson of excitement at the novelty of visiting guests. One swimmer, an older man with wiry hair, nodded our way as we approached the water. “The ladies have come for breakfast,” he said.

Everton say goodbye to Gueye and close in on move for...