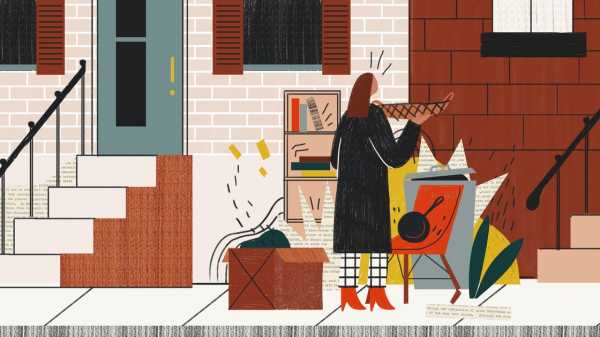 I may have a permanent crick in my neck from lugging a substantial dog basket home from outside a mansion in Primrose Hill. Does it matter if it’s lightly chewed, that it’s Great-Dane-sized, that its hand-woven construction is so firm that no ordinary method of carrying (hands, arms, head) sufficed, and so I ended up schlepping it suspended from one shoulder, pink with excitement, pride, and a dash of embarrassment, to the extended amusement of passersby? Is it necessarily relevant that I don’t, strictly speaking, own a dog? I do know some. Well, one. And, if she’s not interested, I’ll think of an alternate use. I might even sleep in my smart new basket myself.

This is the gaping vortex at the center of all treasure-finding logic: should the acquired item prove absolutely useless, as its original owner clearly felt it to be, there is always something else to do with it, provided one has ingenuity, a high tolerance for clutter, and, ideally, a range of demented enthusiasms. The streets are full of extraordinary junk, and it’s yours for the taking. You have nothing to lose but your dignity.

Back in my so-called youth, the pickings were slimmer. In North Oxford in the nineteen-eighties, the land that style forgot, where every muttering geriatric in a plastic-bag bonnet was a Nobel physicist, one wouldn’t necessarily have thrilled at the sight of one’s neighbor’s leavings: the entire backlist of the British Journal of Theological Education, ninety-two pencils sharpened to a nub, the Rosetta stone roughly rendered by a toddler in Play-Doh, a brown-corduroy capsule wardrobe. Back then, people didn’t leave pans and shelves against their front walls for others to help themselves; household items were designed to last.

Nowadays, there is always a new utensil or gadget to replace the old, and for the shameless collector this is wonderful news. As an obsessive cook, whose interests extend, sadly, to preserving and foraging, I consider no abandoned box or crock too unseemly for a doomed attempt at fermentation, no cast-out dish unqualified to accommodate a shallow pie for twenty. My most useful baking vessel is a six-ton cast-iron Le Creuset that some idiot ditched on his front step—or, perhaps, put down for a moment and turned away. I use a slim wine-box lid to slide bread into the oven, a ravaged-looking sawhorse as an impressively butch shelf. Is it too much to hope that someone nearby is about to tire of an item on my current wish list (a yogurt-maker; a grain mill) and leave it conveniently in my path?

“Oh, this old metal school locker?” a friend said, recently, when I praised her stylish blue cabinet. “I found it on the street.”

Among gardeners, the potential for tragic creativity knows no bounds. Every sort of trash becomes irresistible treasure: cardboard egg boxes, chipped plates, charred baking trays. What kind of fool would throw out this exciting glass demijohn? I should be able to remove its base with a combination of boiling water and ice, and then use it as a magnificent homemade propagator. Of course I want that thick sheet of Perspex, for a possible future cold frame. That cooling rack is definitely useful, should squirrels attack my as-yet-unplanted bulbs. I might use that broken car mirror to reflect natural light onto my seedlings.

I find myself choosing a route home according to which streets might offer excitement. That’s the driveway where someone once discarded an entire wormery: four stories of perforated plastic through which my compost worms now romp happily among apple peelings. Isn’t that the house where they left a climatically challenged hibiscus plant in a plastic bag? (Yes, and I killed it. What’s your point?) I often wonder about the previous owner of the coffin-sized, liver-colored container I found on the corner, once used to store confidential files for, almost certainly, a local spymaster, judging by the scribbles round the rim. Who needs costly purpose-built salad troughs? It made a handsome, if possibly toxic, raised vegetable bed for almost a year, barely disintegrating, until my children noticed and took it to an undisclosed location.

Yes, my home looks somewhat insane, but I’m past caring. You think a harmless compulsion can quickly edge toward lunacy? Give me a moment to grab that red metal bucket, that broken brick, and the rotting bicycle basket, and then I’m willing to discuss.

The biggest Second Amendment case to reach the Supreme Court in...