Home Culture The Wondrous Heroism of Mr. Rogers in “A Beautiful Day in the... 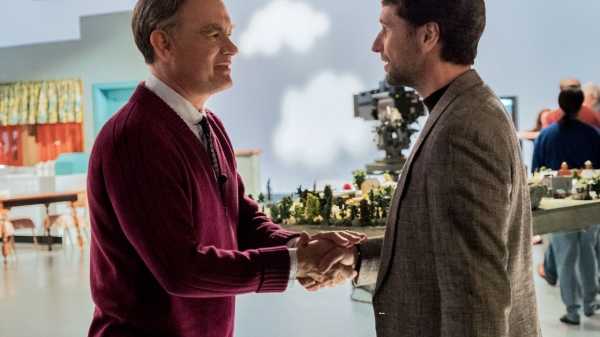 The vision of Fred Rogers—as played by Tom Hanks—that emerges in Marielle Heller’s new film, “A Beautiful Day in the Neighborhood,” is lyrical, strange, and melancholy. The movie is suffused with an air of unreality that, however, has nothing to do with inauthenticity; on the contrary, it feels deeply rooted in experience. Rather, it tells a story that seems too good to be true, and yet, far from defying belief and testing plausibility, the movie does the opposite: it expands, very gradually and incrementally, the sense of possibilities, like turning a light on by rheostat, very slowly, in a dark place and finding, by the end, that it’s shining brightly and displaying events and ideas with a revelatory clarity. And it does so even as the movie’s moods and themes grow ever more sombre.

The premise of the movie—based on a profile of Rogers that the journalist Tom Junod wrote in 1998, for Esquire—is that an investigative reporter named Lloyd Vogel (played by Matthew Rhys), who is something of a cynic, receives an assignment from his editor (Christine Lahti) to write a brief portrait of Rogers. Vogel reacts with disdain over the assignment, about the host of a “hokey kids’ show,” and he approaches his subject with an adversarial skepticism. Vogel, in his interviews with Rogers, attempts to break through what he considers to be his subject’s veneer of calculated, strategic, and tightly crafted decency, in order to find the unvarnished person behind it. He assumes that the public figure of Mr. Rogers must be a character, even a put-on. Yet, along the way, Vogel—who’s hoping to find the self-interested showman pulling the strings of the TV personality—has the tables turned on him.

Having read, in advance of their first meeting, Vogel’s journalistic writings, Rogers takes an interest in him. Seeing Vogel with a cut nose and a black eye, he asks about it, continues to focus his caring attentions, and, with quiet insistence and emotional maieutics, delivers Vogel of the lifelong impacted rage that roils both his professional and family lives. Vogel’s father, Jerry (Chris Cooper), had affairs and then left home when Vogel and his sister, Lorraine (Tammy Blanchard), were children, at the time when their mother was agonizingly dying. Vogel carries his unabated bitterness into his own marriage, with Andrea (Susan Kelechi Watson), a public-interest attorney who is temporarily staying at home with their newborn son, Gavin. It’s hardly a spoiler to say that, thanks to Rogers’s extraordinary devotion, Vogel manages to reconcile with his father and to repair the damage that he has done to his relationship with Andrea.

Yet this very synopsis risks evoking exactly the sentimentality, the artificially sweetened amiability, and the facility that Vogel himself had suspected Rogers of propagating with his show and his public persona. Working with a script by Micah Fitzerman-Blue and Noah Harpster, Heller dramatizes the deep and inextricable connection—rather, the identity—of the television personality and the man. From the start of the movie, she presents Rogers as both the auteur of his broadcast and its own documentary subject. In discussion with Vogel, Rogers repudiates the suggestion that his onscreen personality is a character; he asserts that it’s simply him, despite the elements of dramatic performance (including puppetry and scenes with fictional characters) that are involved.

When Vogel visits the set of the Mr. Rogers show, at the studios of the TV station WQED, in Pittsburgh, he observes the program’s loose format and Rogers’s improvisational spontaneity, as when a sequence being recorded with a child from the Make-A-Wish Foundation, originally intended to be a brief interlude, runs (as a producer laments) for seventy-three minutes. (Vogel asks a producer, “Does this happen often?” She answers, “Every day.”) When a scene of Mr. Rogers assembling a tent comes to nought, Rogers, rather than retaking it or seeking another character’s help, completes the scene as is and makes his failure to assemble it the crucial theme, later explaining his decision to Vogel: “It’s important for children to know that adults’ plans don’t always work out.”

That’s only one of the exalted and memorable dicta that Rogers delivers in the course of “A Beautiful Day in the Neighborhood”—and that Hanks revels, word by word and inflection by inflection, in delivering. From the start, Rogers comes off as a sage, a virtual philosopher with a tone appropriate for children but with ideas of a revelatory depth for all ages. Seeing Vogel unable to forgive his father, Rogers defines, for his virtual viewers, the concept of forgiveness: “Releasing a person from the feelings of anger we have toward them.” Throughout the movie, Rogers offers such words of wisdom and insight, revealing himself to be not merely the host of a children’s show but a sort of freelance activist clergyman whose main pulpit is the show but whose concern is society at large.

As part of his research, Vogel rummages through video clips of television interviews with Rogers by other hosts—notably, Arsenio Hall and Oprah Winfrey. Heller wryly “dubs” the face and presence of Hanks into these fictionally archival videotapes, which play a subtly major role in the film by offering a platform for Rogers to expound his philosophy. Rogers tells Hall that his goal is for adults to “appreciate children for what they are, not for what they will be,” and says to Winfrey that adults, in order to relate to their children, should recall their own childhoods. This very philosophy of memory, of empathy through self-examination and identification, is what Rogers puts into practice in guiding Vogel to confront his past and reconcile with his father.

Rogers sees the continuity of life and art, of professional and personal lives. (For that matter, it’s his very recognition of such continuity in Lloyd’s journalistic work and family struggles that leads him to take an exceptional interest in his interviewer.) What’s more, Heller finds canny methods to assert as much cinematically, in tableaux of artifice based on the sets of Mr. Rogers’s show: miniatures of Pittsburgh, New York, and the drama’s other settings, which distill the same air of possibility, transformation, and wonder that the movie’s live action evokes. (She reaffirms it in a delightful end-credits sequence, in which members of the crew show up amid the miniatures.) Rogers’s extraordinary behavior, of a seemingly miraculous aptness (for instance, showing up at places far away, when least expected, in order to bring the gift of his own compassionate wisdom), is as utterly authentic and personal as his improvisations and his theatrical puppet-craft (which gives rise to yet another of Heller’s cinematic inspirations). Like his work on television, Rogers’s private behavior is so thoughtful and devoted that, regardless of his element of performance and his attention to rhetoric—to the expected effect of his actions and words on others—it seems a pure part of himself. (So, by the way, are his silences—and the movie features an extraordinary one, in a public setting, that echoes, and ups the ante on, one of the great moments of silence in classic cinema, from “Band of Outsiders.”)

The movie’s crucial moment, its turning point, comes early in Vogel’s process of profiling his subject. While interviewing Rogers, he says, “People line up to tell you their problems,” adding, “It must be difficult.” Rogers admits that it’s a “burden” and, when pressed by Vogel on how he copes with it, gives a little recitation and demonstration: pounding a lump of clay, going swimming, mashing the low notes of a piano with his fists. It’s the moment in the film where Rogers notes Vogel’s discerning sensibility, and where he unbends just a bit, suggesting that there is nonetheless a dark side to his character (a dark side both in the emotional and the lunar sense—it’s never on public view). That side is nonetheless suggested by the dimensions implied in the performance, and that comes through in the weighty subjects—such as pain, anger, loneliness, frustration, and death—that are addressed in the course of Rogers’s broadcasts.

It’s Heller’s genius—as already seen, last year, in “Can You Ever Forgive Me?”—to film language cinematically. She’s not merely depicting people talking but rendering words in action, and, at the same time, rendering the language in all of its own beauty, as if it were embossed on the screen in the act of speaking. “A Beautiful Day in the Neighborhood,” with its sense of a burden that’s a calling and that carries its own residue of tragic self-awareness, seems to take place in a second state of higher illumination, in a dreamlike light of exceptional emotional and tonal brightness that emerges from Rogers’s presence and influence. (All the more notably, it’s matched by the frequently dour darkness and shadow of Jody Lee Lipes’s cinematography.) In this regard, Heller’s art resembles that of Clint Eastwood, who achieves something similar in “Sully” and “The 15:17 to Paris”—films of exceptional people whose extraordinary deeds are inseparable from their troubled conscience. The melancholy of “A Beautiful Day in the Neighborhood” is that of a world out of whack—and of its dramatization of an unabated sense of responsibility to do whatever one can to help put things aright. No less than Eastwood’s films, “A Beautiful Day” is a work of intimate and tragic politics, of unsought heroism that’s cursed with the very fact of its necessity.

NASA retired Kepler, a telescope that discovered thousands of worlds beyond...

Some 1.3 Million People in Southwestern Japan Reportedly Told to Evacuate...