Home Culture There’s No Good Reason for a New Yorker to Go to Hudson... 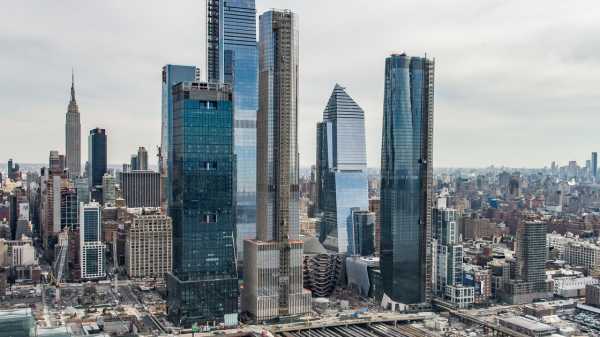 I’ll say this for Hudson Yards, the twenty-five-billion-dollar, twenty-eight-acre development that has risen, like some Tolkien tower, on the far West Side of Manhattan: it would be a great setting for a breakdown. At first, the unremitting artificiality of the place seems merely novel. You ascend from the spotless 7-train platform, push through turnstiles branded with Neiman Marcus advertising, and emerge onto a plaza that bears the same relation to New York City as a police-sketch artist’s drawing does to a face. Someone has heard of the city that Hudson Yards is nominally part of; there is an honest-to-God hot-dog vender to prove it, and handsome, undulating benches to sit on as you admire the landscaping and breathe in the river air. But you have not come to Hudson Yards to eat hot dogs and sit on benches. You are there to climb the Vessel, Thomas Heatherwick’s shawarma-shaped stairway to nowhere, and to wander the seven-story, seven-hundred-and-twenty-thousand-square-foot mall, designed by Kohn, Peterson, Fox. Its interiors, by Elkus Manfredi, are sleek and opulent; the stores and restaurants gleam. Hours slip by. Your sips of the scented, trapped air are growing shallow. The piped-in music has begun to replace your inner monologue. You long to see a pigeon, to smell sun-baked urine, to gaze at the sun itself. You need to leave. You race outside and run south, where you are spat out onto the High Line, beneath mammoth condo-side advertisements for “luxe living” in “residences.” Are those like apartments? you wonder, as a squadron of selfie-takers sweeps by, pelting you in the stomach with glossy shopping bags: fade, expensively, to black.

Hudson Yards is built to impress, and, by some criteria, it does. There’s the sheer scale of its five glass towers, which house offices and, yes, “residences,” and pierce the New York City sky like so many porcupine quills; next year, an observation deck will open, eleven thousand feet in the air. Maybe some public good will come of the Shed, the five-hundred-thousand-square-foot arts space that is scheduled to open next month. The buffed metals, polished stones, and Apple Store-esque glass façades that decorate the mall’s interior are meant to telegraph tastefully deployed wealth, and this they do to perfection. There’s food of the star-chef variety, much of it astronomically priced—or ostentatiously not priced, as the case may be—and fancy tech: a truck-less garbage-disposal system that sounds like Willy Wonka’s chocolate chute; generators designed to withstand inevitable natural catastrophe. Speaking of natural catastrophe, the entire development is built on a platform over the city’s rail yards and outfitted with various locking and sealing mechanisms that are designed to keep the elevators functioning and the lights on, even when the big waves come. Hudson Yards is a ship that can’t be sunk. (Where have we heard that before?) As the rest of us are washed out to sea, we can take comfort in the thought of the lucky Noahs left behind to propagate the species in their gleaming arc.

But let’s stay in the here and now. As is increasingly common in New York City, Hudson Yards is a private space masquerading as a public one. It is the realized vision of one man, the developer Stephen Ross, the founder and chairman of Related Companies, who brought us the Time Warner Center a decade and a half ago. Ross, who will soon move into a penthouse at the development, calls his creation a neighborhood—“the neighborhood of the future,” in his company’s advertising lingo. In reality it is an enclave, a high-end corporate park buoyed by six billion dollars in tax breaks—an amount that dwarfs the subsidies offered to Amazon for its scuttled Queens headquarters—and designed as a kind of amenity-stuffed Hotel California that its residents never have to leave. (There are a limited number of so-called affordable units; in keeping with precedent in our city’s age of latter-day luxury, the people who live in them will have separate amenities, upstairs/downstairs style.) The only thing that Hudson Yards is missing is its own weather.

Yes, the rest of us can visit, but why would we? For all the hullabaloo and the expense—the two are indistinguishable—there’s not much at Hudson Yards that can’t be found elsewhere. The mall is a case in point. Sephora, H&M, Zara, Madewell, even Van Cleef & Arpels and Dior, if that’s your thing: Why trek halfway to New Jersey for it when it can already be had in Manhattan? Related has stirred up some effortful buzz around the mall’s Neiman Marcus branch, the city’s first, as if it were a giant panda and Manhattan a zoo. When I stopped by, earlier this week, stylish teen-agers were posing for pictures in front of the trunk half of a yellow cab, filled with dahlias, that had been planted in the store’s entryway. This is what used to be called a photo op and is now called an “experience.” Either way, no quantity of selfies is going to stave off the collapse of traditional brick-and-mortar retail; a few years ago, when the industry was looking really grim, Neiman Marcus nearly pulled out of the development altogether, causing something of a panic at Related.

In that sense, Hudson Yards is a neighborhood of the future—the future that was imagined way back in the Bloomberg administration, when turning the city into a landing pad for the international super-rich was made top priority and sold as a twisted survival strategy. That vision of luxury is all about a frictionless sameness: being able to do and eat and buy the same things, in the same kinds of settings, to the tune of the same ambient music, no matter where on the globe one may be. It’s no wonder that what Hudson Yards really feels like is a nice airport terminal, with the High Line as its moving walkway. (The High Line, which once seemed like a triumph of urban reimagination, now seems to me the embodiment of this narcotic nowhere-ness: a beautiful highway that has sliced through a living neighborhood, Robert Moses style, leaving luxury buildings in its wake.)

There is one thing at Hudson Yards that can’t be found anywhere else: the Vessel, with its twenty-five hundred steps, eighty landings, and hundred and fifty flights of stairs. It was commissioned by Ross to provide an eye-catching center to his corporate kingdom, the rug that ties the room together, and it is perfect for its environment: a triumph of vapidity, banal to its hollow core. In the run-up to its opening, some clever marketing team got critics to start asking if it might be New York’s new Eiffel Tower. It’s a laughable comparison. The Eiffel Tower was daring, original, most of all a shock; it changed the way that the city of Paris looks, and the way that Parisians look at their city. Meanwhile, the Vessel—its name is apparently subject to change, so make your suggestions now—is simply a means by which to look, again, at oneself: a calorie-burning selfie backdrop that is far more attractive in photos than it is in person, where its reflective, rose-gold exterior has already started to smudge. The other day, a group of people was standing inside the thing at ground level, grinning over a glowing disk placed at the center of the floor. They were taking timed selfies: a face, tinged with blue light, framed by the void. (There was a to-do, last week, when it was discovered that the terms and conditions that must be signed in exchange for Vessel tickets granted Hudson Yards the rights to any images or recordings made of it, in perpetuity. The language is, apparently, being changed.) The experience of climbing the Vessel will feel familiar to anyone who has looked, in frustration, for her seat in a sports stadium. The higher you go, the more you can see of the mall, leering at you from different angles. The Vessel does produce one beautiful view, though, of the glinting, silver tops of the trains in the yards below, encased in their tracks like gifts. Soon they, too, will be covered by a platform and planted over with more towers, a suppressed memory of something useful, time-worn, real.