Home Culture “They Shall Not Grow Old,” Reviewed: The Indelible Voices in Peter Jackson’s... 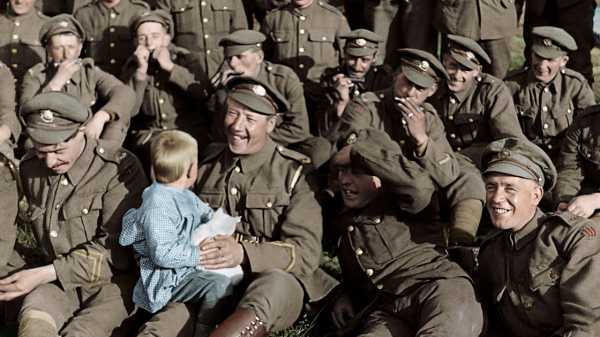 Peter Jackson’s First World War documentary, “They Shall Not Grow Old,” is an instant-classic case of the tale wagging the dog. The movie was made using elaborate manipulations of archival footage from the Imperial War Museum, and that technical work is its highly publicized raison d’être. But it proves utterly inessential to the dramatic power of the stories that are told in the movie—literally told, not by way of the images but on the soundtrack alone.

The film begins with Jackson on camera, offering a breezily earnest explanation of the movie’s genesis: a commission from the museum to make a film with its archival footage, provided that he could come up with “a unique and original way” to use it. Jackson got an idea: he cleaned the footage up, slowed it down to natural speed, colorized it, and rendered it in 3-D, making it seem like current-day movie footage, in order to tell the story of the start of the war, the training of recruits, their time on the front lines—specifically in trench warfare, in Belgium, fighting against German forces—and the end of the war and the troops’ return home. He also added sound effects, including artillery fire, rifle fire, the clomp of boots, the squish of mud, the grind of tanks, the clamor of soldiers yelling indistinctly—and, in some cases, thanks to the detective work of lip readers, dubbed-in dialogue (which is relatively insubstantial).

Most important, however, the movie features voices nearly end to end, an assemblage of sound clips excerpted from oral-history archives, in which veterans of the war describe their experiences. This testimony is the core of the film; it opens vast depths of cinematic experience. The voices have a primal authority that resonates gravely throughout the film with a literary majesty. In their turns of phrase, choices of words, and their merest inflections, the dozens of soldiers (whose names are listed in the end credits) do more than describe the war; they embody it. “They Shall Not Grow Old” is a nearly great talking-head documentary in which the talking heads are never seen, only heard.

The reclamation and exaltation of these voices—even if over-edited and snipped to brief clips—is Jackson’s enduring and exemplary achievement. The images, for all the labor devoted to their adaptation, are mainly just illustrative—a sort of visual backdrop and temporal space-filler, stretched and condensed to suit the soundtrack. Where Jackson’s flattening of the images to the bland standards of conventional entertainment vitiate their iconic power—reduce their sense of direct contact with the events under discussion and feel as synthetic and as vague as their manipulations are—his dramatic composition of the arc of wartime experience, guided by the accounts of its survivors, embraces a wide and insightful range of illuminating details, beginning with the casual shrug with which young British men received the country’s declaration of war, on August 4, 1914. Several of them describe the war as “a job,” even as an eagerly anticipated adventure by contrast with their workaday lives.

Jackson devotes close attention to recruitment, to the martial fever that swept through the country and prompted many teen-age men below the official age of service (nineteen) to volunteer (some veterans enlisted at the age of fifteen), and to the practicalities of military training. The hardship of marches with a hundred-and-nine-pound pack, in official-issue boots that rarely fit (one explains that he urinated on the boots to soften the leather), was matched by the training in marksmanship and hand-to-hand combat with bayonets—as well as the emotional conditioning of raw recruits to kill the enemy.

The movie details the sudden transport to war—the train trip to Dover, the boat from Dover to Calais, the march through France’s unharmed (and seemingly unaffected) farm country, until the troops reached what one calls “derelict” towns, sites of an eerie and nearly total devastation, devoid of inhabitants, reduced to ruins and, in places, a lunar desolation. Passing through them, the troops reached the trenches that they’d be defending and from which they’d launch their attacks—no mere dugouts but a maze-like array built on a city-like scale. (At this point, the movie’s images burst from their original black-and-white into color and 3-D.)

One soldier speaks of his arrival in the trenches as being “like an adventure, like camping, but with a little danger to make it sporting.” But the danger soon proved not to be little at all: German artillery fire exhausted the nerves of some soldiers very quickly; in the five or six seconds between the burst of fire and the explosion of the shell, one says, “you could pass through any number of psychological changes.” Along with the horrors of war—the destruction of artillery shells, the terror of sniper fire, the constant threat of death, the agony of gas attacks—soldiers endured wearying physical conditions, including cold, mud, poor hygiene, lice, rats, filth, fatigue, disease, and labor, and also boredom. Soldiers describe observing their neighbors in the trenches suddenly dying from a sniper’s bullet or a piece of shrapnel, of a skull being “splintered” and a body sheared in half, vertically, front to back, offering an “anatomy lesson.” Others describe the macabre danger of pits of mud formed partly of putrefying corpses, into which soldiers slipped and sank to their death.

The most effective, most memorable images are mainly ones that show places and things—the devastated villages that soldiers pass through on the way to the front, worms and flies on corpses, the murky shimmer of this putrescent mud. The images of soldiers at ease, at work, or in combat—and, for that matter, appalling and mournful ones of those fallen in action—aren’t so much unaffecting as, despite Jackson’s best intentions, general. Attached by technology to our own times, they’re detached from their own physicality, from their iconic connection to the instant that they preserve.

The dramatic center of “They Shall Not Grow Old” is an attack on the German lines, as soldiers go “up and over” from the trenches into “no-man’s land” and charge the positions of German machine gunners—who await the moment to spray the advancing British troops with bullets and kill almost everyone in the “first wave.” Soldiers describe being hit with German artillery—and also by British artillery, when cannons either had inadequate range or the gunners miscalculated. The advancing British army tramped over the dead bodies of their own comrades; tanks, used in battle for the first time, ran over corpses; reaching the German lines, British soldiers were incinerated by German flamethrowers; and, when the British forces managed to reach German trenches and capture German soldiers, some took prisoners and some took no prisoners. (“I’m afraid there was a little bit of slaughter,” one British veteran says.) One filmed moment in the aftermath of the final push against the German lines takes precedence over the others: after the battle, a wounded soldier with bullet holes in his arm is treated by a medic who applies iodine to the wounds—a process which, on the soundtrack, one veteran describes as horrifically painful; as a bandage is raised and happens to cover his nose and mouth, the soldier’s stare into the camera seemingly challenges the camera operator’s effort to record his sufferings and those of his comrades. It’s a gaze at once defiant and imploring; it expects no possibility of the inner understanding that’s so desperately desired and flings stifled fury at the impassive camera. The challenge is one that doesn’t trouble Jackson, at second hand; he takes the camera’s ability to reach the soldiers’ experience, and his own power to transmit it, for granted.

Several soldiers’ descriptions of the end of the war offer a shocking decrescendo: one calls it “one of the flattest moments of my life”; another says it was like being “being kicked out of a job.” (The images of soldiers silently absorbing news of the Armistice are also among the most powerful in the film.) One veteran wondered how it would be possible to return to society; it turned out to be a difficult return for some. There was “mass unemployment” on the British isles. Some workplaces posted signs saying “No ex-servicemen need apply,” and civilians appeared to have little comprehension of, and less interest in, what the veterans experienced in battle. “They knew about mud and lice, not about the fear,” one says; another speaks of servicemen as being “a race apart.” Here, Jackson, as if setting the immediacy and vividness of battle apart from the remoteness of daily life back home, snaps the images back into black-and-white form, with rounded corners, as if they’re being projected as home movies or in a small theatre.

Though “They Shall Not Grow Old” builds the experience of soldiers into a single drama, centered in northern Europe, there’s no one outfit, no one battle, no one place that’s identified in the course of the archival narration, no one soldier who’s identified in his own account. Jackson edits the images and the archival interviews into a false unity; the specificity of individual observations and historical knowledge are distilled into a factitious approximation of the soldiers’ collective experience of the war at large. From amid the composite, certain individual accounts and images leap out and seemingly cry out for further individuation, further specification, further transformation. (Also, many images pose more questions than the movie’s sound clips answer; for instance, separate battalions of Sikh troops and black soldiers are seen marching, though it’s never clear whether they trained or fought alongside white British soldiers.)

A crucial contrast to Jackson’s over-manipulations is seen in some footage of contemporaneous newspaper photographs, shown in extreme closeup, with their halftone dots rivalling the image itself in prominence. These shots, with their conspicuously unnatural distortions and artifacts, have an authentic expressivity, a sort of visual music, that’s absent from Jackson’s digital normalizations. The analytical and transformative power of digital technology, whether applied to video or to sound, invites creators to see and hear more in found material than is apparent, to go beyond mere depiction and its assumptions of transparency to create something that’s “unique and original”; instead, Jackson relies on it to submerge it in what’s ordinary and derivative. It’s a tribute to his inspired dive into oral-history archives that, despite the aesthetic and dramatic banality of his approach, the movie is, somehow, utterly absorbing and deeply moving nonetheless.

The Premier League title race – what happens next?

Whyte vs Browne: Dillian Whyte will not be distracted by stormy...