Home Culture “This Is Congo” and the Ongoing Despair in the Democratic Republic of... 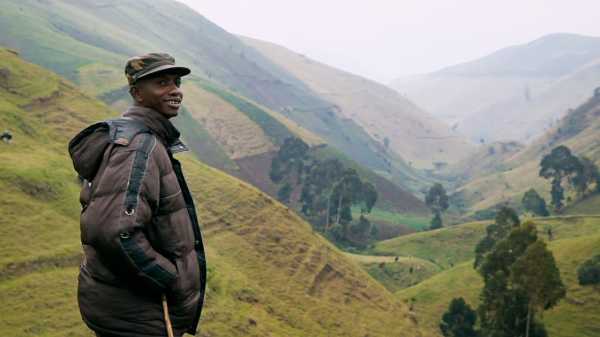 In the opening scene of Daniel McCabe’s powerful documentary “This is Congo,” Colonel Mamadou Ndala, a tall, lean, and charismatic commander of the Congolese National Army’s 42nd Battalion Rapid Reaction Force, hikes into the hills outside the city of Goma, in eastern Congo, and pauses to look out over peaceful hillsides shorn clean by goats, sheep, and cattle. “To grow up as a child in Congo, according to God’s will, is to grow up in paradise,” he says, in beautiful Congolese-inflected French. “Perhaps because of the will of man, growing up in Congo is to grow up in misery, because of these endless, unjust wars.”

McCabe’s film is about the ongoing conflicts in the Democratic Republic of the Congo, a huge country roughly two-thirds the size of Western Europe. These conflicts, which have drawn in several neighboring countries and been described as “Africa’s World War,” have been going on for more than twenty years and have claimed up to six million lives, either as a direct result of the fighting or as the result of disease and malnutrition. In the process, they also have destroyed Congo’s economy. Some forty per cent of the population of the D.R.C., as it’s known, lives below the “absolute poverty line” of $1.25 (in U.S. currency) per day. More than four million of its population are internally displaced, and at least another half million have fled to other African countries.

“This is Congo” covers a specific episode of the country’s more general violence. Between 2012 and 2015, a rebel group known as M23—which, in the east of the country, had support from neighboring Rwanda and Uganda—advanced on Goma, and briefly overran it, until, after much fighting, it was driven back. McCabe’s film documents several years of the M23 campaign, and, in order to paint a wide canvas, flashes between the lives of four characters. One of these characters is Mama Romance, an enterprising single mother and former milk seller who, in order to better provide for her family, left her previous life for the riskier but more lucrative one of selling the rare gemstones found in the region (tourmaline, amethyst, gold, topaz, and blue sapphire) on the black market. A second character is Hakiza Nyantaba, a tailor, displaced seven times by combat, who has had four of his children gunned down but has always managed to flee with his battered sewing machine. (“I never forget this machine because it provides salt, cooking oil, and soap for my children.”) A third is Colonel Kasongo, a pseudonymous former mineral smuggler and still highly placed national-Army officer, who appears in McCabe’s film only in profile and, when he does speak, with a cloaked and distorted voice. Elsewhere, his words are read by the the Ivorian actor Isaach De Bankolé. Kasongo provides wry and insightful commentary on Congolese history and politics: “Congo is my mother and my father . . . . The problem is that its leaders don’t have a patriotic sense.”

But the heart of the film belongs to Colonel Ndala, whom McCabe met literally by accident. McCabe, a still photographer who took up filmmaking to address Congo’s tortured history, was filming a group of former génocidaire rebels originally from Rwanda. McCabe and his crew were crossing back over the front lines in the middle of the night, after their truck broke down, and were captured by elements of the Congolese Army. The Army had a reputation for armed thuggery, and each unit operated, according to McCabe, as essentially the private army of its commanding officer. But McCabe was fortunate enough that the unit that picked them up was Ndala’s, and also that, when the filmmakers were brought back to the outpost, they discovered that one of McCabe’s fixers had gone to elementary school with Ndala’s commanding officer.

The Congolese Army, with its terrible reputation, was shut off from journalists. But Ndala was not your average Congolese officer. He was a devout Muslim with three wives and ten children. He had grown up poor, started as a child soldier, and rose through the ranks to become a colonel celebrated for his bravery and intelligence. McCabe and Ndala took to each other, and it’s interesting to watch how the filmmaker and the wily colonel sought to make their meeting work to their mutual benefit. In order to legitimize McCabe’s presence, McCabe and Ndala concocted the fiction that he would make a propaganda film for the Army while, in the meantime, Ndala allowed McCabe to film freely. In McCabe’s footage, Ndala never does anything but praise the Congolese state. “He saw it as an opportunity to get a raise,” McCabe said. “He thought it would please the President.”

McCabe describes his work with Ndala as sitting around and waiting for things to happen. “Vérité,” he told me, “was where the film was.” And, for his patience, McCabe got some extraordinary footage. There’s a scene at Ndala’s headquarters where Ndala peels back his clothing to reveal the scars from twelve bullet wounds he’s received over the years. Another scene shows one of Ndala’s female plainclothes officers thrashing a soldier on camera for the crime of thievery. “Ndala ran a tight ship,” McCabe told me.

But the film’s set piece is a full-out attack by Ndala’s soldiers on an M23 unit. As Congolese tanks blast away, Ndala’s soldiers advance toward an M23 position. With bullets whizzing around him, clutching a swagger stick (actually, according to McCabe, a broom handle), Ndala walks calmly into the fire, urging his troops on. When he finds some of his soldiers cowering behind a stone wall, he prods them forward, saying, “It’s not good to have your commander advancing in front of you.”

Ndala eventually drives M23 out of eastern Congo, and the region enjoys a brief period of peace. Ndala becomes a national hero. McCabe shows public appearances in which adoring crowds refer to him as the “Jesus of Goma” and “Papa.” Many Congolese, according to McCabe, compared him to Patrice Lumumba, the first Prime Minister of an independent Congo, a national hero who was executed by a firing squad following a coup d’état at least partly sponsored by the C.I.A. “Ndala never retreated on the battlefield,” Colonel Kasongo says, in his gravelly, technologically altered voice. “He had a strong sense of patriotism. That’s how he built his popularity with the people.” “It was one of the first times the Congolese felt they could rally around the national Army,” McCabe told me. “That was his power.”

McCabe’s secondary characters revel in the peace. At her daughter’s wedding, Mama Romance tells McCabe that “Congolese are hard-working people. We love to really enjoy life. Joy is our power.” Nyantaba, the tailor, who, earlier, in a refugee camp, had wondered if “God has forgotten us,” returns to a house that he had previously fled and remarks that, even if trees were stolen for firewood and the roof was “touched by” stray bullets, “we are happy to be in our home.”

But the interlude is brief. In what almost serves as an epilogue to the film, McCabe shows Ndala’s truck on fire and his despairing troops screaming that his body, inside, is being incinerated. A screen graphic explains that, according to the government, two national-Army colonels were later convicted of paying Ugandan-backed rebels twenty thousand dollars to assassinate Ndala. “If I had to guess, those were the fall guys,” McCabe told me, about the trial. “What happened is that Ndala began displacing Army officers who ran lucrative smuggling operations along the Ugandan and Rwandan borders.” “They stopped him dead in his tracks,” as Colonel Kasongo puts it.

The promotional material for “This Is Congo” states that the film has “thoroughly unpacked the legacies of colonialism, resource exploitation, and genocide” that make Congo what it is today. And scattered throughout the film are brief expository interludes spelling out Congolese history—the legacy of the slave trade, King Leopold and the savage Belgian occupation, the killing of Lumumba and the rise of Mobutu, the venal operation of foreign mineral interests—but Colonel Kasongo puts it more succinctly when he says “where there is corruption development cannot exist.” “Our country has almost no system of governance,” he adds. “Our national Army is disorganized and poorly paid.”

According to McCabe, Colonel Ndala was buried in an unmarked grave. After the assassination, his three wives and ten children dispersed around the country. It is telling that Joseph Kabila, the President whom Ndala worked so hard to impress, has postponed new elections, and has so far refused to honor the constitutionally mandated term limits that prevent him from running for a third term. Kabila and his family are worth tens of millions of dollars, and, according to Human Rights Watch, his regime recently recruited M23 fighters from Uganda and Rwanda to attack anti-Kabila demonstrators in Kinshasa. At least sixty-two Congolese were killed.

Trump praises a Congress member for body-slamming a reporter

In “The Haunting of Lin-Manuel Miranda,” Ishmael Reed Revives an Old...