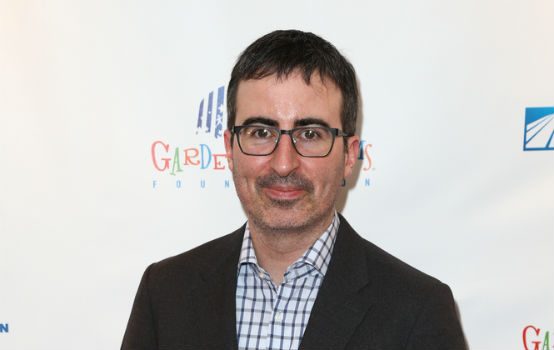 Try this thought experiment: imagine moving abroad as a comedy journalist, where much of your reporting amounts to mockery of the host country. Imagine, too, that residents of that country find your ridicule so funny that they reward you with a television program, where you are free to pontificate on all of their social and political ills. Broadcast to millions of viewers, this soon makes you a fixture of public life (and by extension, quite wealthy).

Does such a scenario seem a little ridiculous and outlandish? What nation in its right mind would behave this way? Yet that’s precisely what America has allowed with British comedian/journalist John Oliver, host of HBO’s “Last Week Tonight.”

In one sense, Oliver’s popularity is a reflection of American humility and our capacity for introspection. Perhaps because of the still-palpable influence of Christianity—with its robust conception of sin, personal responsibility, and pricked consciences—we remain capable of enduring reminders about our errors and flaws. Though pilloried the world over for our pride and arrogance, from manifest destiny to military interventionism, we Americans routinely agree to having our neighbors extract the splinters (and sometimes even logs) from our own eyes.

Nor is there anything essentially wrong with foreign voices offering critical commentary of our country’s behavior. Sometimes we need that kind of outside opinion to clarify or expose what we, through familiarity or laziness, are incapable of seeing. Indeed, many prominent British intellectuals do exactly that. Peter Hitchens—prolific writer and current columnist for The Mail on Sunday—has written thoughtful pieces on borders and immigration and American individuality and responsibility, among other topics. The same can be said for philosopher Roger Scruton and his penetrating analysis of urban development and society’s need for religious faith. The distance gives both Brits helpful perspective.

The reason Hitchens, Scruton, and others like them are effective is because they are indefatigably modest, restrained, and courteous. If they did nothing but scold, they would quickly become tiresome. And when they do criticize, they do so with charity and respect for a country not their own. I was under the impression these were traits that Brits prided themselves as possessing. Not so for Mr. Oliver. His program is filled with caustic insults directed at a panoply of American individuals and institutions. His coverage of the 2016 presidential election was particularly scornful of the American political process. The content is also typically boorish—of all the episodes seen, narry one misses an opportunity to make a joke about sex with animals. Are such things suddenly funny if offered with an English accent?

Over the years Oliver has trained his sights on every element of American society: government, education, religion, guardianship of the elderly, immigration, the NRA, vaccines, and net neutrality, among other things. Though he presents himself as an objective pundit who takes jabs against left and right, his program betrays a strong bias against conservative values. His analysis of the prosperity gospel movement and televangelism, though a welcome commentary on exploitation of the poor and vulnerable, demonstrated a palpable disdain for religious faith writ-large. And as much as his mock organization Our Lady of Perpetual Exemption skewered the ridiculousness of the “health and wealth” movement, it was hard not to see this as a refutation of American evangelicalism more broadly.

This Oliverian opprobrium for American religious values is further visible in his adamant support for abortion, as well as his opposition to crisis pregnancy centers, which seek to steer women away from abortions. He is also critical of charter schools, which, whatever their many faults, present a welcome alternative to our nation’s widely failing education system. His vitriol against the Catholic Church—still the largest religious institution in the United States—is especially antagonistic: Oliver has suggested that Pope Francis’s opposition to gay marriage demonstrates that the pontiff has “lost touch with reality.” He’s labeled the Church a “vast criminal enterprise,” and sarcastically accused it of “victories for humanity” like the Crusades, forced adoptions, and an “international pedophile exchange program.”

Though Oliver married an American citizen and Iraq war veteran, he seems to have little love for traditional middle America and its way of life. This should come as no surprise, given that he’s surrounded by coastal urban elites, who are largely insulated from the problems, needs, and concerns of common Americans. Though Oliver frequently appropriates the stories of poorer Americans to serve his rhetorical purposes, his ideological agenda is one of globalism, progressivism, and technocracy, all ideologies that have contributed to the decline of the American middle class.

Though Oliver claims to care about his adopted home, I am more inclined to believe he desires an America free of its greatest traditions in favor of the liberal socio-political project Notre Dame professor Patrick Deneen so effectively analyzes in his recent Why Liberalism Failed. The America of Oliver and his audience is not one of interdependent communities and time-proven customs, but of “increasingly separate, autonomous, nonrelational selves replete with rights and defined by our liberty, but insecure, powerless, afraid, and alone.” This is perhaps no surprise, given that Oliver broadcasts from New York City, the epicenter of technocratic snobbery and what Charles Murray calls “superzips,” or zip codes with tremendous concentrations of people with high educational attainment and income.

As Deneen observes, “much of what today passes for culture—with or without the adjective ‘popular’—consists of mocking sarcasm and irony.” This is certainly the case with Oliver, who snidely labels many Americans bigoted and backward and pursues a policy of damnatio memoriae that condemns any American tradition that fails to correlate with his anemic, progressivist vision for our nation’s future. Yet as much as Oliver has shone his spotlight on many targets worthy of reproach (e.g. Infowars, unverified scientific studies, multi-level marketing), his larger, self-referential project undermines core elements of American identity, ones we should be most wary of losing in this time of socio-cultural distemper. As we’ve done with previous British products that have grown burdensome, perhaps it’s time we dumped this one into an Atlantic harbor.

Casey Chalk is a student at the Notre Dame Graduate School of Theology at Christendom College. He covers religion for TAC.

How Amazon turned its darkest time into runaway riches

Oil Crashes to 18-Year Low as Reports Suggest Russia, US to...

‘Wishful Thinking’: US May Be Unwilling to Fight China Over Taiwan,...