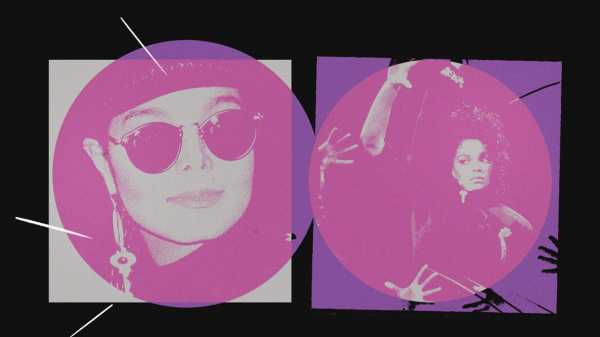 The album envisioned a post-racial utopia founded on the power of groove, and taught me that performance could be its own kind of genius.

Text by Text by Amanda Petrusich

“Touchstones” is an ongoing digital series in which New Yorker writers guide us through their favorite works of art.

When Janet Jackson’s “Rhythm Nation 1814” was released, in 1989, I was a gangly nine-year-old, and still figuring out how my limbs moved. The album worked on me physically—it taught me things about my body—before I could make any sense of its themes. Back then, I took weekly piano lessons (I was terrible), and dutifully sang in my school’s chorus (also terrible). Listening to “Rhythm Nation 1814” in my bedroom with the door closed was the first time I realized that music could actually animate a person, taking full hold of the body and yielding a second, even more beautiful thing: dance. Lyrically, Jackson was exploring the idea that the right rhythm can intoxicate and control us, and, eventually, unite us as living, breathing, flesh-and-bone humans. To understand or harness that power, you had to be ready to move.

This year, Jackson has reappeared in public view: she is on the ballot for induction into the Rock and Roll Hall of Fame, and she has been touring steadily (including several high-profile festival sets) in support of her eleventh album, “Unbreakable.” Jackson’s musical career began in the nineteen-eighties, under the management of her father, Joe. She released a pair of unremarkable pop records—“Janet Jackson,” in 1982, and “Dream Street,” in 1984—but it wasn’t until she severed professional ties with her father that she emerged as a visionary of sorts. “Control,” her first collaboration with the producers Jimmy Jam and Terry Lewis (both formerly of the Minneapolis funk-rock band the Time), was released in 1986, when Jackson was just nineteen. It’s now considered one of the foundational albums of New Jack Swing, a genre marked by a synthesis of rhythm and blues, hip-hop, funk, disco, and pop. New Jack Swing has syncopated, swung rhythms, and relies more on customizable drum machines than pre-packaged samples.

You can hear the trademarks of New Jack Swing in Nasty, from Control: a loud, popping snare drum, a driving synth melody, and a hard swing feel (meaning certain notes land slightly behind the beat) in the bass and percussion.

New Jack Swing is chiefly characterized, however, by its attitude. To perform it requires deep self-assurance and an almost preternatural ease on the dance floor—what we might now call swagger.

Jackson performing in the 1986 music video for Control.

“Control,” Jackson’s first No. 1 album, sold two hundred and fifty thousand copies in a single week—a record at the time for a female artist. Jackson reunited with Jimmy Jam and Terry Lewis for a follow-up, and “Rhythm Nation 1814” was released in September of 1989. Jackson was drawing on an already established idea: the dance-based utopia.

A brief history of dance utopias.

“Dancing in the Street”

“One Nation Under a Groove”

“Get Into the Groove”

“Rhythm Is Gonna Get You”

Its title (Jackson added the 1814 because that’s the year the national anthem was composed) suggests a kind of musical Arcadia, where everyone is unified by a deep and undeniable imperative to move: a compulsory shoulder pop, an instinctive wiggle, or whatever it is that happens to your body when you hear someone yell, “Gimme a beat!” D.j.s in particular had been arguing for decades that dance could be a way of minimizing the distance between races, genders, and creeds. David Mancuso, a legend of New York disco, often spoke about the dance floors he commanded as fiercely egalitarian, a place where hierarchies were instantly erased and the crowd became a single, loving organism.

Jackson opens the record with a strange monologue: a call for unity, chanted in a steady monotone.

We are a nation with no geographic boundaries, bound together through our beliefs. We are like-minded individuals, sharing a common vision, pushing toward a world rid of color lines.

The citizens of Rhythm Nation are universalists, rallying only for the greater good, which makes “Rhythm Nation 1814” feel, in some ways, like the last major pop record that could credibly be described as optimistic. Already by the late nineteen-eighties, Jackson’s entreaties sounded gentle and idealistic compared to those of more radicalized consciousness-raising artists.

Compare Jackson’s idealistic lyrics to those of her more radicalized peers.

This is the test, no struggle, no progress / Lend a hand to help your brother do his best / Things are getting worse, we have to make them better / It’s time to give a damn, let’s work together

‘Cause I’m black and I’m proud / I’m ready and hyped, plus I’m amped / Most of my heroes don’t appear on no stamps

Fuck that shit, ‘cause I ain’t the one / For a punk motherfucker with a badge and a gun / To be beating on, and thrown in jail / We can go toe to toe in the middle of a cell

Public Enemy and N.W.A. arguably had a more profound influence on pop culture today; it’s hard to imagine a contemporary pop star, who came of age in an era when intersectionality is the dominant critical framework, successfully insisting that we’re all more similar than we think. The vision of a world in “Rhythm Nation,” in which societal ills such as poverty, drug use, and unemployment are merely individual problems, not inextricably linked to systemic injustice, hasn’t aged especially well. The colossal empowerment anthems of our time—such as Beyoncé’s “Formation,” from 2016—are less about erasing difference than claiming and celebrating it.

Jackson was incalculably influential in other ways, though, including in her use of the music-video format. A thirty-minute longform music video, which Jackson’s team took to calling a “telemusical,” was produced to promote the record just prior to its release. It contained three distinct, shorter videos—for the singles “Miss You Much,” “The Knowledge,” and “Rhythm Nation”—all shot in black and white, surely a nod to Jackson’s vision of a color-blind society. The story line functions as a kind of P.S.A., following two kids with big dreams whose lives are ravaged by drugs.

In the telemusical that aired on MTV to tease the album, two aspiring musicians meet their idol.

The video premièred on MTV, and was later released on VHS. The eighties were a remarkable moment for the synching of the musical and the televisual, an idea seeded by Elvis Presley’s provocative, hip-thrusting appearance on “The Ed Sullivan Show,” three decades before. Michael Jackson’s fourteen-minute video for “Thriller,” which was directed by John Landis, premièred in late 1983; it was followed by groundbreaking video work from Peter Gabriel, Dire Straits, and Madonna.

Janet Jackson worked with Anthony Thomas, then an unknown choreographer, who later honed the pop-and-lock (he was influenced by the jerky, rousing funk and disco dances developed on the West Coast in the nineteen-seventies), and is now often referred to as “the man who changed the face of hip-hop.” The video for “Miss You Much,” choreographed by Jackson and Thomas, includes an incredibly captivating chair routine that would be imitated for years after.

The Miss You Much Chair Routine

Jackson’s dance moves influenced everyone from the Backstreet Boys to Tinashe.

Jackson’s pioneering integration of the visual and musical wasn’t immediately recognized or appreciated by critics. In the eighties and early nineties, music journalists often considered too much spectacle a distraction, or evidence of something prefabricated and therefore inauthentic. “Spontaneity has been ruled out,” Jon Pareles wrote of Jackson’s live show in 1990. “Rockism,” as it later came to be known, valued songwriting and a particular kind of pained earnestness over practiced performance. As a young critic, I internalized these values so thoroughly that it took me years to unlearn them, to figure out how to trust pleasure and lightness and drama. Eventually, criticism in general remade itself, and writers now routinely acknowledge that there’s a distinct and sophisticated art to the extra-musical extravaganza. It is its own kind of genius. Today, almost every major pop star—Katy Perry, Taylor Swift, Nicki Minaj, Drake, Lorde—tours the way Jackson did, with massive, elaborately choreographed stage shows.

Jackson and her producers also foresaw, in a way, the deterioration of genre as anything other than a gesture.

Rhythm Nation 1814 synthesizes a wide range of styles, from hard rock to hip-hop.

Somebody is Tonight
R. & B. slow jam

Because Jackson was so singular and virtuosic as a performer—because she made each track her own—“Rhythm Nation 1814” feels coherent; Jackson herself is the narrative thread. To watch her perform is to witness a fully integrated artist, the physical and the spiritual working in glorious tandem. For me, “Rhythm Nation 1814” is an affirmation that music can be so all-consuming that it rearranges us on some cellular level, teaching us new things about our bodies. I’m still grateful for its lessons.

The 1991 album that gave rise to a rock genre and captured the spirit of a new generation.

The 1997 album that defined a new Hip-hop aesthetic and expanded the definition of rap.

Global Oil Production Will See 20 Mln Bpd Drop Due to...