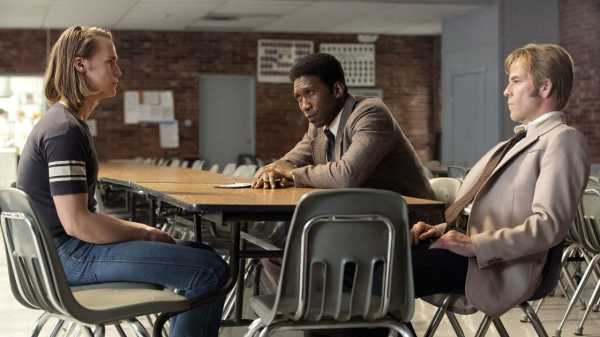 In its first season, “True Detective” cultivated a delirious murder-mystery psychosphere, flirted with gross and engrossing conspiracy theories, elevated buddy-cop banter to an entertaining level of existential bushwa, embodied the McConaissance—then shrivelled to a grotesque whodunnit, in an unaccountably uplifting season finale. Its second season, excitingly awful, pustulated through eight episodes of California sleaze-noir. In the third, which débuts on HBO on Sunday, the series creator and showrunner Nic Pizzolatto dials down some previous excesses—the garish emotional tones, the mystical machismo—while remaining tuned to the same frequency. The new “True Detective” is faintly pretentious, manageably ridiculous, and dull.

That the title of its first episode (“The Great War and Modern Memory”) references Paul Fussell’s book about the First World War and the poetry inspired by its trenches is a measure of its abiding pomposity. “Gas! GAS! Quick, boys!”—the Arkansas State Police detectives Wayne Hays (Mahershala Ali) and Roland West (Stephen Dorff) hasten to the stage. The title gestures toward the backstories of the central cops, both of them Vietnam veterans. Hays did two tours of duty as a long-range reconnaissance specialist, scouting behind enemy lines, a lonely pathfinder in the jungle. Now he tracks wild boar for fun. But his innate intensity doesn’t allow for fun. “He’s got his own thing,” as his partner says. Throughout his terrific performance as this emotionally wounded warrior, Ali steams and simmers and smolders with repressed emotion. The display of heat is all the more remarkable because the script sheds little light on Hays’s inner self.

This season, like the first, relays its plot with a looped time line. One afternoon in 1980, in a mildly depressed corner of the Ozarks, a twelve-year-old boy and his ten-year-old sister hop on their bikes and ride off into a missing-persons case. They disappear on November 7th—“the day Steve McQueen died,” we are wistfully instructed, as if called to observe a moment of silence for expired masculine ideals. A volunteer search party is also the site of Hays’s first date with Amelia Reardon (Carmen Ejogo), the missing boy’s English teacher. In a thunderous echo of Season 1’s philosophic shtick (“Time is a flat circle”), Hays explicates a Robert Penn Warren poem, and Amelia flirts back by quoting Einstein: “The distinction between past, present, and future is only a stubbornly persistent illusion.”

Pizzolatto structures Season 3 in the image of this concept. Before it is 1980, it is 1990: new evidence has unknotted the neat bow that tied up the case. Hays and West reopen the investigation, which causes some moments of friction between Hays and Amelia, now married, with two children. Amelia has just finished “a nonfiction novel” on the crime. A glance at a galley copy suggests that the book exceeds four hundred pages, which might be the season’s most incredible twist: to judge by the five episodes (of eight) available to reviewers, the story, told straightforwardly, would scarcely fill out a pamphlet.

But straightforwardness is antithetical to the motion of the show. Before it is 1990, it is 2015: Hays, a seventy-year-old widower grappling with the onset of dementia, pads into his living room to meet a true-crime documentarian whose show is examining the case. Her queries inspire him to take another crack at cracking it; he’s struggling to piece together both the mystery and his mind. His son drives him out to the hermitic hideaway of his former partner, who has aged into a whiskey-glugging, dog-loving geezer. West is tearfully aggrieved that Hays has never apologized, but “True Detective” hasn’t shown us what there is to apologize for. The tension between them is thick, but the reason for its existence is withheld. The Hays of 2015 wants to revisit the case, but the audience doesn’t even know what the earlier visits determined. And it appears that the old man has discovered crucial information by finally getting around to reading his dead wife’s first book, a quarter century after its publication. Substituting obfuscation for intrigue and complication for complexity, the show simulates narrative movement by yanking your chain.

To untangle the clever chronology of “True Detective” is to confront an unclever cop show. Among the suspects are a crew of snotty teen-agers, an older cousin with the demeanor of a creepy uncle, an unidentified one-eyed black man, the institution of Catholicism at large, and a Native American waste picker who explains that he could not readjust to civilian life after his return from Vietnam: “You ever been some place you couldn’t leave and you couldn’t stay? Both at the same time?” (The dialogue in general is execrable; the worst line, whose context I won’t spoil, is “I’ve got the soul of a whore!”) Enigmatic clues include a handful of faceless dolls—tiny, bridal-gowned bundles of straw—which are portentous at first glance and kitschy at many subsequent glances, not unlike the series itself.