Home Culture Trust No One: The X-Files at 25 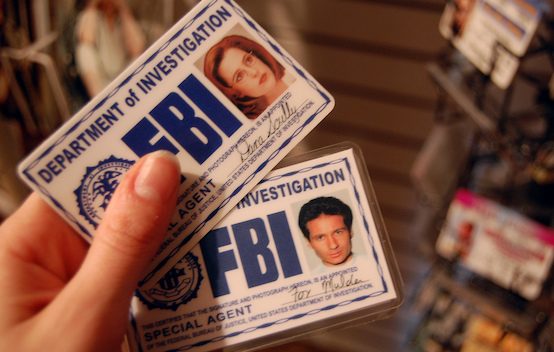 Aliens, Neanderthals, poltergeists, more aliens, bumbling bureaucrats, cabals, still more aliens, pyrokinetics, artificial intelligence, religious cults, were-creatures, eugenicists, mutants, stoners, more bumbling and malicious bureaucrats, and a few more aliens. Quite the motley crew of characters. Then, after the teaser, the smeared and ghostly credits play, usually with a final thump and the statement: “The Truth is Out There.” Every once in a while, though, variations surprise us, such as “Trust No One,” “Resist or Serve,” “Everything Dies,” and “Apology is Policy.”

These creatures, these possibilities, these seductions, and these impossibilities haunted our Friday nights back in 1993, as one show revolutionized everything from entertainment to libertarian paranoia. Admittedly, some of season one seems a bit dated in hindsight, but there’s a reason The X-Files mattered so much when it first arrived on our television sets 25 years ago this fall, and why the series remains relevant (and alive) to this day.

Created by Chris Carter, a native Californian who had worked for Disney in the 1980s, and aired on the then-relatively new national station Fox (one of its two main characters, in a not-so-subtle nod to Murdoch’s rising empire, even has “Fox” as his unlikely first name), The X-Files offered intelligent pulp for the right-thinking person. The camera angles, the cinematography, and the lighting were of the big screen more than the small, no matter how limited the special effects budget. The lighting was extraordinarily creepy, and made even creepier by Mark Snow’s haunting soundtrack of atmospheric electronica. The show spanned a full nine seasons (from 1993 to 2002), two theatrical releases (1998 and 2008), several bestselling novels (by Kevin J. Anderson and Charles Grant), and two rock albums (that is, inspired by The X-Files), before going into a hiatus, only to be revived Netflix-style over the last two years on Fox.

Aside from Star Trek and perhaps Breaking Bad, it would be difficult to find a series that has had a greater influence on American culture over the last half century. Not only have the characters and stories become ingrained in American folklore and folkways, but most modern entertainment owes it a debt. Some of its influences have been obvious—such as Fringe and Stranger Things—while others, such as Battlestar Galactica and Salem, have offered more subtle nods. Even one of America’s foremost scholars of Shakespeare, the brilliant Paul Cantor, has written extensively and intelligently on the show, its symbolism, and its significance.

The X-Files, of course, did not emerge out of a vacuum. In terms of American culture and imagination, it followed in the line of Poe and Hawthorne, Bradbury and Lovecraft, O’Connor and Percy, and Serling and King. It also followed almost three decades of American interest in the occult, UFOs, and hauntings. Even figures we incorrectly remember as staid—such as the founder of post-war conservatism, Russell Kirk—gave considerable attention to these irrationalities in their various books and articles of the period. Interest had become so intense in UFOs during the late 1940s and 1950s (after the supposed Roswell alien crash landing of 1947) that the FBI had responded with its own form of “Internal Affairs” for the supernatural and alien, Project Blue Book. The program ended in 1970, after citizens’ groups proclaimed it to be fraudulent, existing for the sake of coverup and to protect the interests of the federal government and the armed forces.

Most critically, like all good horror and science fiction, The X-Files played upon—and at times exacerbated—our deepest fears as a people. This is not to suggest that it would have failed at a different time in our history, but it certainly didn’t hurt that libertarian angst over Gulf War I, Ruby Ridge, and Waco, the general conservative distrust of the New World Order, and the rise of popular and consumerist radio talk shows coincided with its success. And while Watergate was two decades past by the time The X-Files began, Nixon’s specter of corruption hangs over the entirety of season one.

The main character, Fox “Spooky” Mulder (David Duchovny), reflected the paranoid curiosity of every intelligent and liberty-minded American in the post-Cold War era, wondering just what the heck was going on in an age that rapidly and horribly left Ronald Reagan behind, even while claiming to speak in his name. Dr. Dana Scully, Mulder’s skeptical and Watson-esque sidekick, reflected our more rational and patriotic side, the side that still wanted government to be our ally, not our master. At first, Scully is somewhat bland, merely a foil to the witty Mulder. As the first season progresses, though, Gillian Anderson brings much more depth to her character, especially with regard to her Roman Catholicism. Naturally, the issue of faith as opposed to reason appears frequently. In the pilot—which takes place a year before the series—the FBI assigns Scully to The X-Files, hoping that she’ll temper Mulder’s paranoia.

In the first season, we see a number of bosses come and go. Some are ambitious. Some are blindly patriotic. Some are even well-meaning and well-intentioned. All, however, are so arrogant as to be unable to see beyond their own agendas, whether for the private good or the greater good. Only Mulder fully serves the common good, with Scully defiantly loyal to the person of Mulder but not to his ideas or instincts. Mulder, wounded at almost every level except his intellect, remembers his younger sister’s disappearance when the two were just children, and is now convinced that she was abducted by aliens. Obsessed with the loss, he’s made a name for himself as an expert on the psychotic behavior of serial killers, which led him to take over the Bureau’s most neglected division, the X-Files, which, it seems from oblique references in the show, are even older than the FBI itself. There he’s earned the mocking “Spooky Mulder” nickname from his unreflective peers at the bureau.

In what would be a running gag on any other show but seemed plausible in this one, Mulder almost always saw what he wanted to see—that which is mysterious and gnostic—while Scully almost always missed everything that wasn’t purely rational, except when it was related to faith and Catholicism. In a nod to its audience (not typical, given the pandering in most Hollywood movies and TV shows of that day), Scully and Mulder are both well-educated, each with advanced degrees, and each prone to speaking in complicated sentences with actual and meaningful vocabulary and grammar. Never did they speak down to the audience, though exposition could be long at times.

Vitally, Mulder is the one person who always stands for truth, no matter the cost to himself or his reputation. A crusader to his core, he never backs down. At one critical moment in season one, as the FBI is hoping to shut down the X-Files, Mulder fiercely challenges the committee trying to crucify him: “No one, no government agency, has jurisdiction over the truth.” It’s the kind of thing that made my soul soar at age 25. At age 50, it still does.

In almost every way, the show understood the nuances of the post-Cold War world better than the so-called intellectuals and neoconservatives of that era. The X-Files was not concerned with the “end of history,” but with the threatened annihilation of what was (and is permanently) human. Though cheesy at times, it dealt seriously with the corruption of the republic, the militarization of the police, and the rise of empire abroad.

The last several years have seen The X-Files‘ first nine seasons remastered on blu-ray. The results, not surprisingly, are glorious visuals (even the weak effects of the early seasons seem better, if somewhat quaint) and even more stunning audio. Mark Snow frankly is a musical genius, but to hear his soundtrack on blu-ray is to take even his abilities to a new level, hitherto unappreciated on VHS and DVD.

The revival of the series on Fox, which began in 2016, is excellent. The show remains true to its roots while having improved at every level the writing, acting, and special effects. Even the music has remained good. Both Duchovny and Anderson are at the very height of their abilities, with acting talents so strong that each seems somewhat beyond human.

For a variety of reasons, I stopped watching television shows (other than the news) around 1981, when I was in seventh grade. I never stopped going to the cinema and watching classic movies, but TV in the 1980s did nothing for me. I was far more interested in exploring my local environs, reading, and writing. Yet for whatever reason, I happened to see the pilot of The X-Files on its first appearance. I had just turned 25. A friend taped the shows for me (God bless him!) and I finally bought my first TV in 1996, wanting to watch both The X-Files and Babylon 5. To me, as I look back on 1993 while I was working on my Ph.D., The X-Files was as important to informing my worldview as were the many hours I spent reading Liberty, Reason, National Review, Chronicles, and The Freeman.

Re-watching the series now with my children reminds me just how critical the decade of the 1990s was. Though it probed into the most difficult issues of society, conformity, individuality, empire, and humanity, The X-Files existed in a more innocent era, a pre-9/11 time that still believed a national security state to be but one possible future, not the nightmare dystopia it has become. Ronald Reagan gave us breathing room, economically and globally. We lived on the capital of the former until 2008, but we blew the global stability within two years of Reagan leaving the White House.

Equally, The X-Files gave us a warning not only about creeping empire and the New World Order, but the dangers of an intrusive security state that claimed to exist in the name of its people but retarded the free will of those same people at every turn. Carter’s warning was a massive and brilliant one. For the most part, we ignored it, and are now suffering for it immensely. When it comes to governments, corporations, and colossal entities, I agree with Carter, Mulder, and Scully: trust no one.