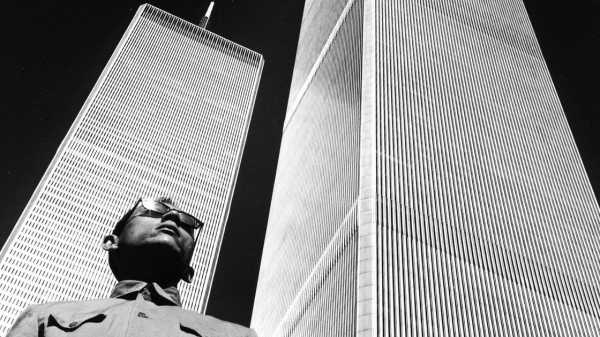 On an evening in December, 1980, the photographer Tseng Kwong Chi gate-crashed the party of the year: the gala at the Metropolitan Museum of Art. It was the opening night of “The Manchu Dragon,” an exhibition (organized by Diana Vreeland) of Chinese costume from the Qing dynasty. Tseng used a medium-format camera to photograph the arriving guests. An era’s tony milieu pauses, flash-lit: an amused Yves Saint-Laurent, Halston in high spirits, a quizzical William F. Buckley. Nancy Kissinger turns up in the same Adolfo dress as two other women—but nobody looks embarrassed. Tseng himself is also in the pictures, grinning away beside his subjects, with a cable release in his hand. And he is dressed, as he frequently is in his dandy-conceptualist art, in a plain gray “Mao suit,” which reads here as a laconic visual rejoinder to the exhibit’s lavish Orientalism. 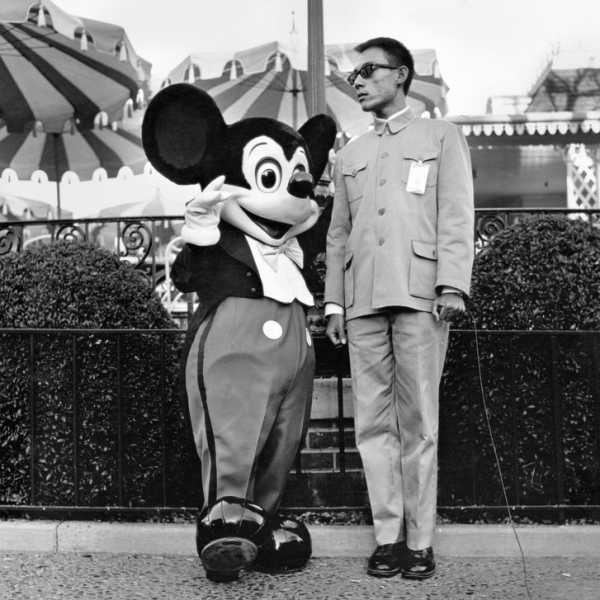 Andy Warhol was among the celebrities Tseng importuned at the Met, and there is something of Warhol’s nineteen-sixties self-invention in Tseng’s cultivation of an unvarying image, a mask that made the most of his outsider station. But Tseng’s art is emphatically of the eighties. He is best known for—that is, a little obscured by—his documenting, in more than twenty-five thousand photographs, the work of his friend Keith Haring. (One such photo, and more of Tseng’s work, is currently on view as part of the exhibit “Art after Stonewall, 1969–1989,” at the Grey Art Gallery, at N.Y.U.) As a prolific magazine photographer, he took portraits of Warhol, Julian Schnabel, and Jean-Michel Basquiat. He was frequently found among the gaudy noctiluca of New York club life—the likes of Kenny Scharf, Ann Magnuson, John Sex, and Madonna. At venues such as the Mudd Club, where he had his first solo exhibition, Tseng was not always dressed in his estranging costume. But, when he wore it, the suit was a reminder that since the late nineteen-seventies he had been amassing a work of sober wit and coherence—and also, it seems, deepening ambivalence about life in America. 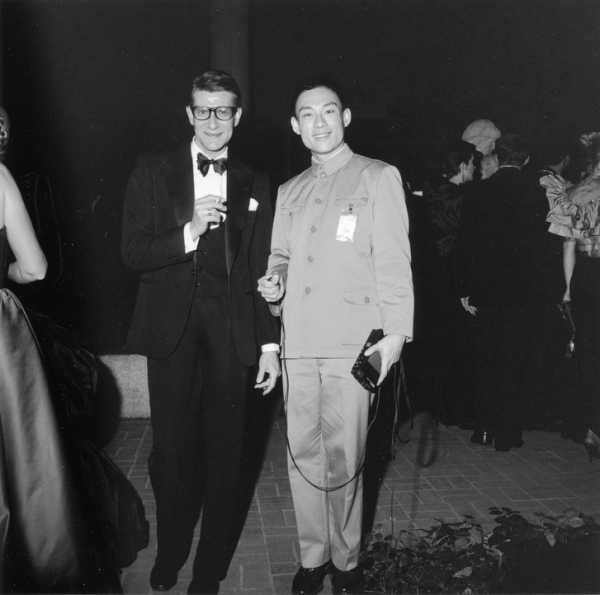 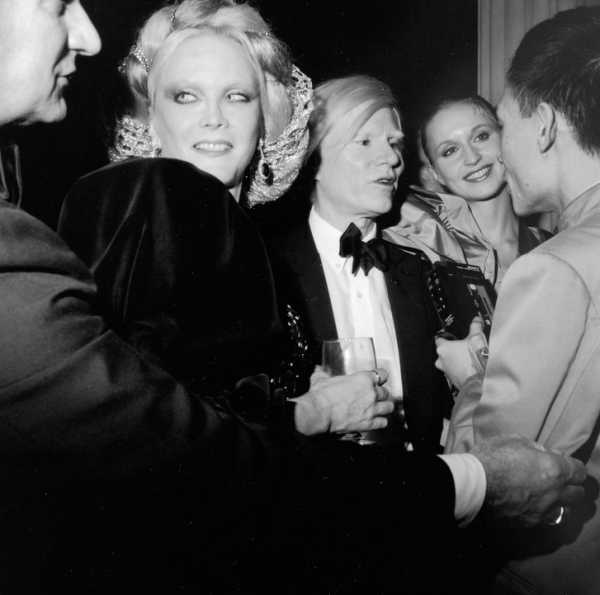 “Monique van Vooren, Andy Warhol, his entourage, and Tseng Kwong Chi,” from “Costumes at the Met,” 1980. 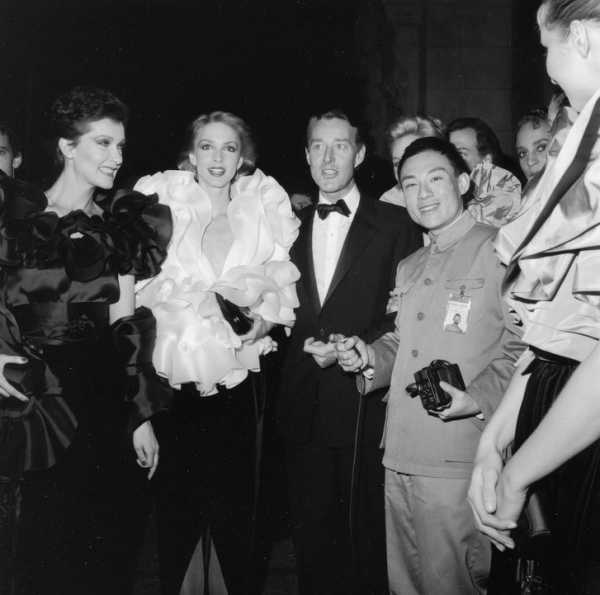 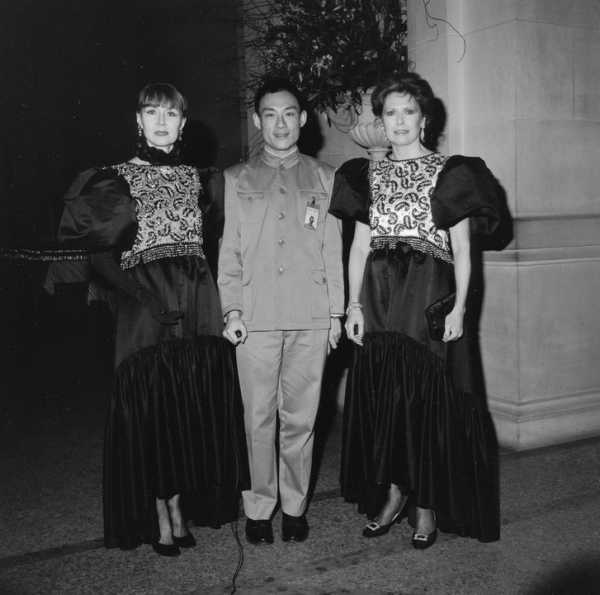 Tseng was born in Hong Kong and raised in Vancouver by Chinese parents. His father had fought against Mao in the Nationalist Army; he and Tseng’s mother fled China in 1949, a year before Tseng was born. For college, Tseng studied photography in Paris; among his student projects was an artist’s book filled with passages from Gertrude Stein and street photographs (more accurately, park photographs) that owe much to Brassaï and Cartier-Bresson. He appears to have hit upon the rigors of the suited self-portraits—if that is what they are—soon after he moved to New York, in 1978. In a collection of Tseng’s work from 2015, his sister, Muna, describes how their parents organized dinner at the Windows on the World restaurant, at the World Trade Center. But her brother owned no formal attire other than a Zhongshan suit (as it’s more precisely called) that he had bought in a Montreal thrift store. His parents were aghast when he showed up wearing it, but the maître d’ treated him like a visiting dignitary; from there, Tseng began to assume the austere, mischievous persona that would dominate his art. 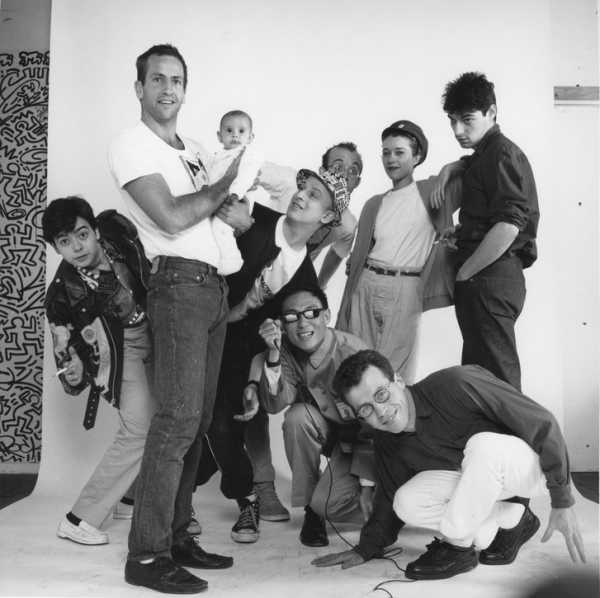 He called this character “an ambiguous ambassador,” and, in a series he called “East Meets West,” posed him—posed himself—in front of various icons of touristic America. He leaps into the air in front of the Brooklyn Bridge, stands impassive beside Mickey Mouse at Disneyland, gazes off into the distance with Niagara Falls behind him. All the early pictures were taken, square format, with his father’s nineteen-forties Rolleiflex; as in the photos from the Met in 1980, you can usually see the cable release in the photographer’s fist. To the top-left pocket of the suit, Tseng attached an I.D. badge—it said “visitor,” or sometimes “slutforart”—and so in many of the photographs there’s a sly reflexive quality: the artist is wearing a small portrait of the artist, mirrored sunglasses and all. In the late nineteen-seventies and early nineteen-eighties, Tseng also took the ambiguous ambassador to Europe, where he appears heroic before the Arc de Triomphe, and diminutive between two policemen at the Tower of London. 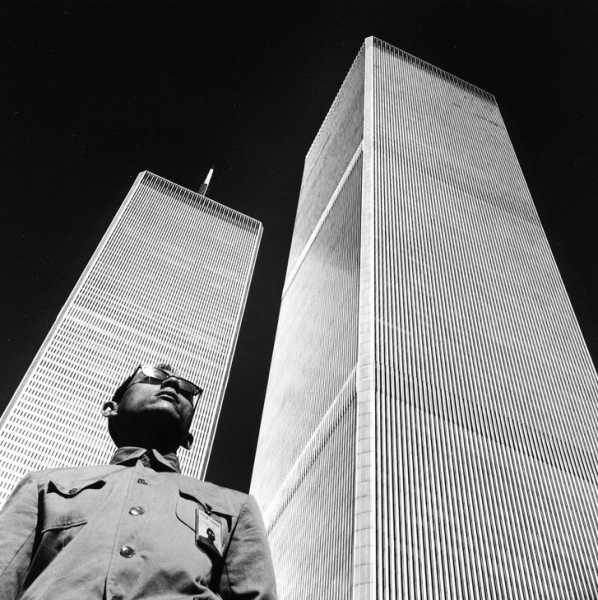 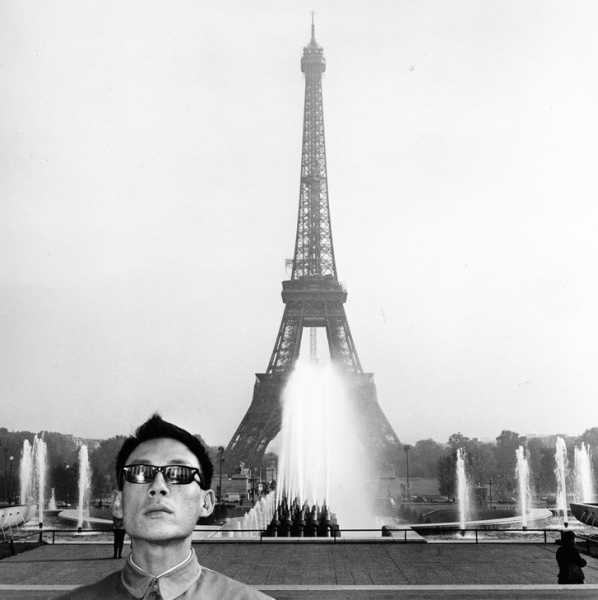 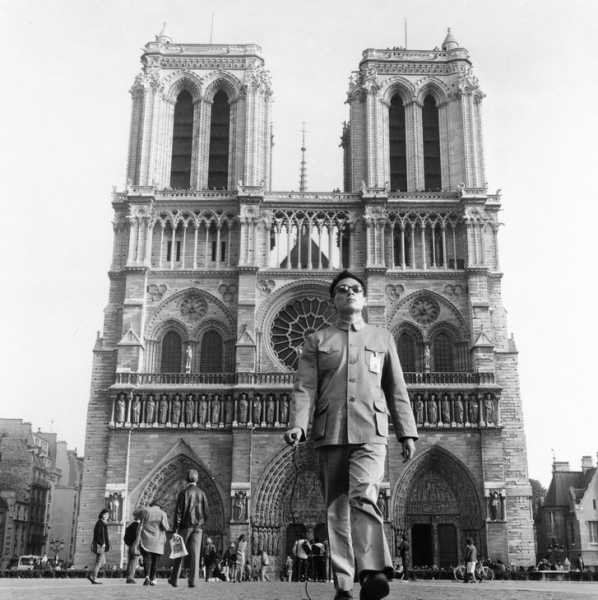 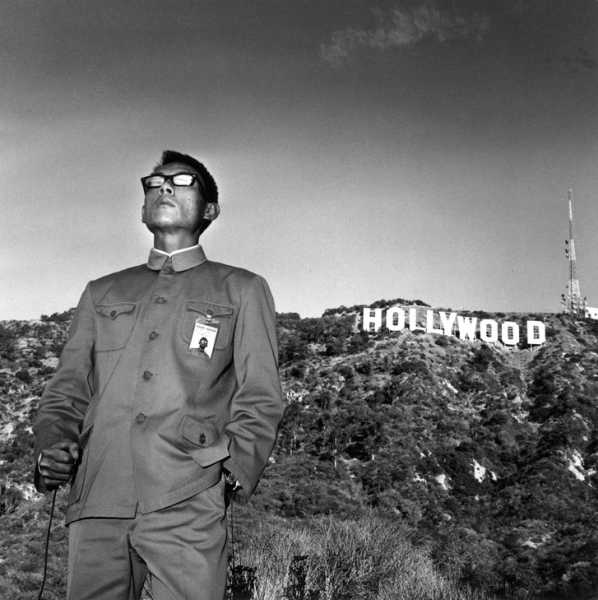 In a short film about him, made by Christine Lombard, in 1984, Tseng claims that the “East Meets West” series was partly inspired by Richard Nixon’s visit to China in 1972. The photographs, in other words, stage imaginary scenes of cultural friction, craving, and interpretation. Considering that he was a young gay Asian artist in New York in the nineteen-eighties, Tseng’s responses to resurgent conservatism were notably playful. In the series “It’s a Reagan World!,” he cast his downtown artist friends as straight, preppy, suburban couples; exuberant in their new cultural-political consequence, they recall Chinese propaganda of the nineteen-fifties as much as American. And in the “Moral Majority” photographs he invited certain princelings of the New Right (Jerry Falwell, Daniel Fore, and others) to pose before a rumpled American flag. Tseng told them it would look as if it were billowing in the wind, but the flag just looks abused, and the men in front of it appear puffed with vainglory. Once again, Tseng insinuated himself into some of the pictures, passing as an ally in seersucker and a smirk. 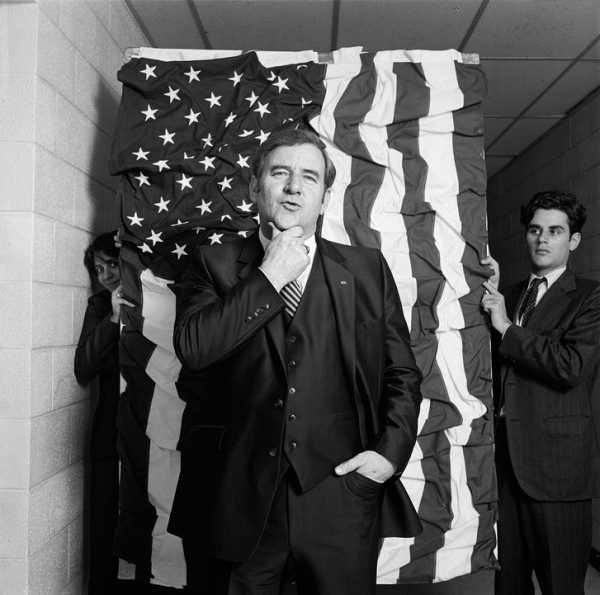 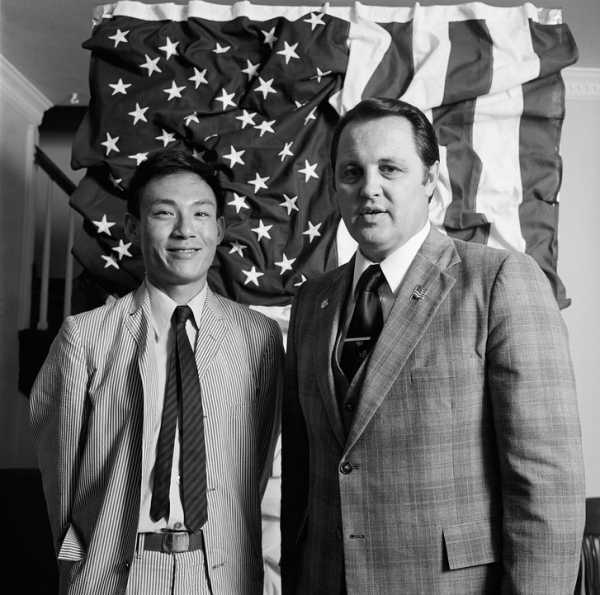 Tseng died, of AIDS, in 1990, less than a month after Haring did. He was thirty-nine years old. In the final years of his life, he acquired a new camera, enlisted his partner, Robert-Kristoffer Haynes, as his assistant, and took his uniformed alter ego further afield, into the vasts of American landscape. He found a land no less fraught with politics than the sights and monuments of New York and Washington, D.C. Here, the “inquisitive traveller” (as he also referred to the character) mimics Caspar David Friedrich’s Rückenfigur, whose back is turned to us while gazing upon the natural sublime. Or, in Tseng’s case, the ideological sublime: Mount Rushmore, the Grand Canyon, Monument Valley. In these late photographs, he is dwarfed by the scenery, but his suited silhouette is no less insistent a reminder that belonging is always also performing. Romantic and wry, no longer willing to turn even his mirrored gaze in our direction, Tseng gets smaller and more distant, until he disappears. 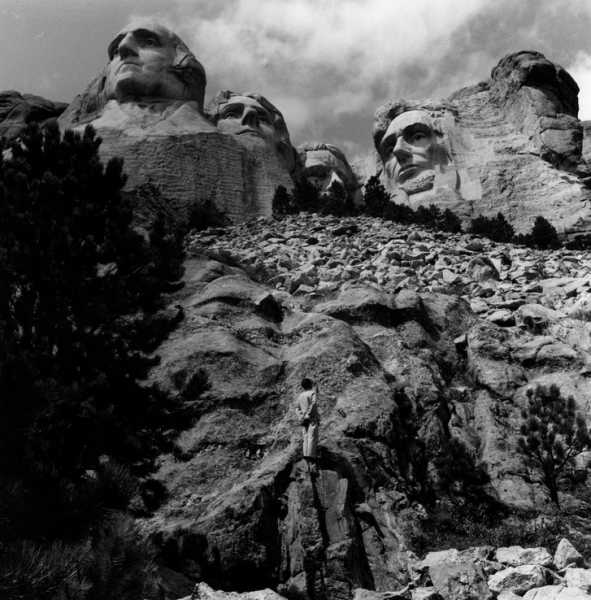 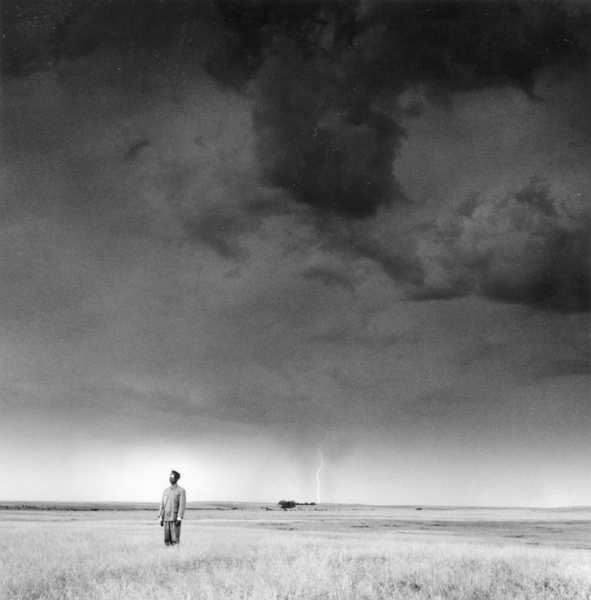 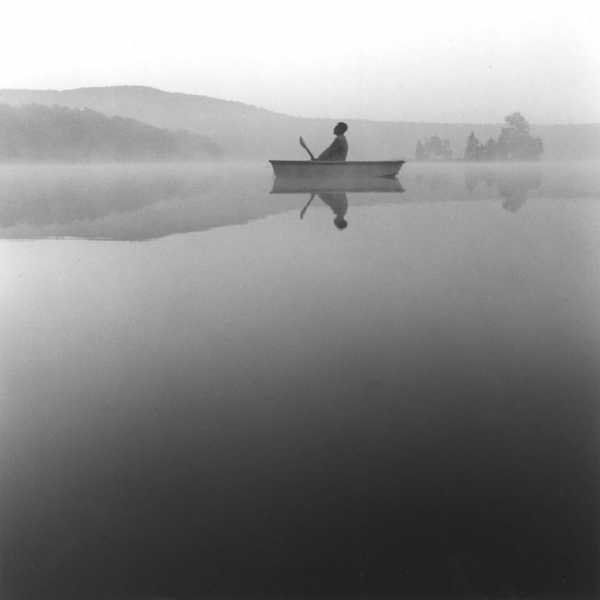 A Google walkout organizer just quit, saying she was branded with...

Sean O’Brien to make Leinster come back against Benetton