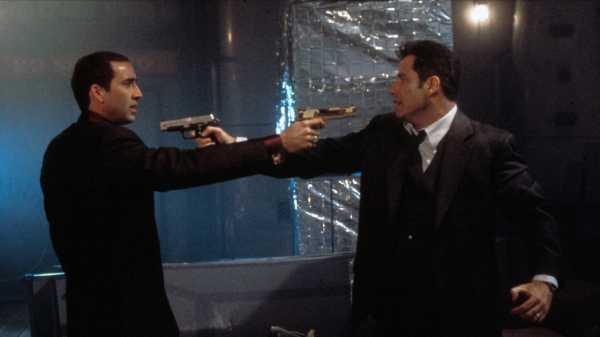 On a recent Sunday afternoon, Cage in the Park, a theatre series created by Sebastian DiNatale and Zachary DiLanzo, staged a Shakespearean reënactment of the 1997 action film “Face/Off,” at the Grecian peristyle at the southern end of Prospect Park. DiNatale and DiLanzo, both of whom are staffers at “The Daily Show with Trevor Noah,” had rewritten the screenplay in iambic pentameter (sort of), renamed the two main characters Travoltus and Cageo, after the movie’s stars, and set the story in ancient Rome. There would be just two performances—first come, first seated.

The peristyle—designed by Stanford White and built around the turn of the twentieth century—is an elegant but very public space; while the crowd waited for the show to begin, a mariachi band warmed up for a nearby wedding, a man in a tracksuit did a series of deep squats under a maple tree, and a woman in a leopard-print bathing suit rode across the stage on a very small pink bicycle. The entropy seemed to suit the occasion. Shortly after 2 p.m., DiNatale sprinted out of a makeshift tent and introduced himself. “Full disclosure: I did not expect this many people,” he said. “But this is art! This is how art works! Art is for people like us, who appreciate art. We are art, and are celebrating art today.” The crowd cheered. “Face/Off” is a deeply loved cult classic. I am only half ashamed to count myself among its partisans.

The plot of “Face/Off” is insane and magnificent. A special agent named Sean Archer, played (at first!) by John Travolta, has sworn, Ahab-like, to enact sweet revenge on the international terrorist Castor Troy, played (at first!) by Nicolas Cage, who, years earlier, shot and killed Archer’s son, Michael, in a botched assassination attempt. Archer captures both Troy, who is now in a coma, and his brother, Pollux, but he can’t get either one to tell him where in Los Angeles they have hidden a chemical weapon. The solution is obvious: Archer will wear Troy’s surgically harvested face, infiltrate the secret prison-at-sea where Pollux is being held, find out the pertinent info, save the city, and, finally, have his old face sewn back on, no problemo. Alas, Troy wakes up from his coma, finds Archer’s face floating in liquid, and demands that a kidnapped surgeon sew it onto his blank head. Then Troy sets everyone who knows about the face-swap on fire, and begins living as Archer. The film culminates in a long, bloody fight scene, in which the two main characters learn what it feels like to square off against a man who is wearing your face.

Incredibly, “Face/Off” was largely praised upon its release, and it grossed two hundred and forty-five million dollars worldwide. (One of the lone dissenting voices was Barbara Shulgasser, writing in the San Francisco Chronicle, who—bless her—called the film “idiotic.”) Most of the accolades were for the director, John Woo, who had come to Hollywood after making many terrific kung-fu movies in Hong Kong. His action sequences are chaotic, aggressively stylized, thrilling, and relentless. He is also prone to awkward symbolic moments, often involving birds. It felt appropriate, then, that the theatrical production of “Face/Off” was narrated by the character of Woo, a role played by the queer comedian, host, and drag queen Jon Wan, outfitted in a large leather jacket and dark sunglasses. “What is a man, other than his face?” Wan asked the crowd. “What happens when you take that face . . . off?”

The film overflows with such preposterous yet earnestly spoken dialogue. It’s a clown car of demented language, delivered with psychotic enthusiasm and nary a steadying voice. In an early scene, before his face is taken off, Troy boards a private plane and begins harassing the flight attendant, who is actually an undercover agent. “You know, I could eat a peach for hours,” he whispers, before conspicuously pulling his weird sunglasses down his nose. “If I were to send you flowers, where would I—wait, let me rephrase,” he continues. “If I were to let you suck my tongue, would you be grateful?” His tongue pops out, primed for sucking. Because DiNatale and DiLanzo’s version is set in Roman times, they subbed in grapes for this scene: “Grapes, nature’s ball! I could eat grapes for hours,” Cageo, played by Yoni Lotan, announced.

“Face/Off” is, at heart, a film about mistaken identity, a device with deep Shakespearean roots, and the play “Face/Off” incorporates several of Shakespeare’s most famous scenes and soliloquies. Early on, Travoltus, played by David Carl, wrestles with the prospect of switching faces with Cageo: “To be or not to be . . . face-swapped?” he wonders. (“Travoltus, it’s very important that you not be a little bitch,” his counsel, Flora, played by Mary Houlihan, advises. “Rome needs a hero.”) When the procedure finally goes down, it’s handled by Desdemona, reimagined as a high priestess by the actor and writer X Mayo. She takes her cues from the witches of “Macbeth” and their bubbling cauldron (on her first attempt, Desdemona accidentally gives Travoltus a donkey’s face).

Part of the humor and delight of “Face/Off” is that it presumes that a person’s entire identity is contained in their face—not their mind or spirit or even their body. Simply their face. The play claws hardest at Cage, whose performance—particularly when he’s pretending to be Archer pretending to be Troy—is so outsized and rubbery that it’s hard to imagine that it wasn’t conceived as some sort of meta-commentary on the silly excesses of Hollywood. “Please don’t mention that Francis Ford Coppola is my uncle,” an embarrassed Cageo pleads, holding a cup of Coppola wine. (Travolta, who may have just been trying to keep up, shouldn’t be spared any skewering—his delivery of the line “It hasn’t been recovered yet?!” will continue reverberating around your living room for days after you finish the film.)

Can “Face/Off” be read as a kind of cautionary tale, wherein a few cocky humans are punished for meddling with the natural order of things? Is the final fight scene a metaphor, telling us that the real enemy is always within, and that, to vanquish evil, one must first vanquish oneself? The film poses a series of heady philosophical questions, such as “What is self?” and “Is self . . . face?” But, for me, “Face/Off” mostly recalls a more innocent time, back when two adult men with receding hairlines could appear in a cuckoo film based on the idea of swapping faces to fight crime, and everyone made tons of money and had an excellent time. In the park, under the midday sun, watching a company of actors in Halloween-store Grecian robes celebrating “Face/Off” as a cultural wonder, I felt free, briefly, of enraging news and melancholic thoughts, and tuned in, instead, to the glorious lunacy of humankind: How does a world that contains “Face/Off” also contain suffering? For a sweaty but blissful ninety minutes, it felt, to quote Castor Troy, “like looking in a mirror . . . only not.”