Home Culture Two Films About Nazis Show the Difference Between Engaging with History and... 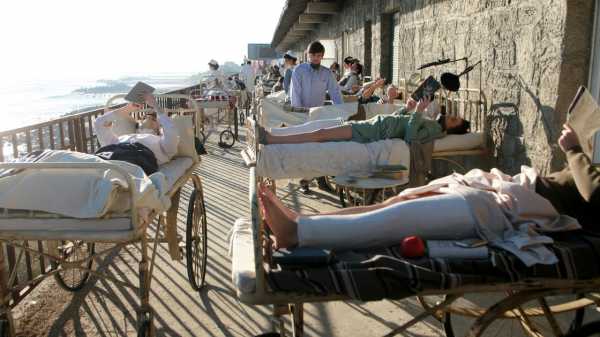 Both films are based on true stories. “The Captain” tells the story of Willi Herold (played by Max Hubacher), a corporal in the German Army who, at the age of nineteen, in April, 1945, two weeks before Germany surrendered, deserted from his unit, found a captain’s uniform in an abandoned car, put it on, pretended to be a captain, found one deserter to order around, found some other wandering troops to command, and, with them, took over a German prison camp for deserters. While the camp’s actual administration was awaiting the arrival of a court-martial to try its prisoners, Herold—claiming to have direct orders from Hitler—ordered and organized the summary execution of the prisoners. (After the war, he was arrested by the occupying British forces, tried, and executed.)

Schwentke depicts Herold narrowly eluding the hot pursuit of a carload of soldiers seeking to shoot or capture him for desertion, but, from the start, he marks the film with the two polar extremes on which the film is organized: fabricated authenticity and simplistic irony. A lone runner comes over the horizon of an open field, followed by what looks like a clown car, from which a circus bleat of a bugle call sounds, mixed with gunshots. Soon it’s clear—the urgent runner is seen to be a bloodied soldier whom the pursuers, roaring ahead in a jeep, are trying to kill.

Filming in a stone-earnest black-and-white palette, Schwentke blends the pseudo-documentary style of handheld visual agitation with the stately aestheticism of widescreen compositions. Wandering through an empty road in an open field, Herold sees an abandoned car and finds some apples (he’s starving) and also the uniform that transforms his fate. Donning it, Herold then practices speaking like a captain, giving orders to the empty field, being cruelly sarcastic and unctuously imperious—and then singing a little theatre song and juggling three of the apples that he’s found. Such theatrical frivolity—the second in the film’s opening minutes—recurs throughout the film, always in proximity to and contrast with scenes of bloody murder. 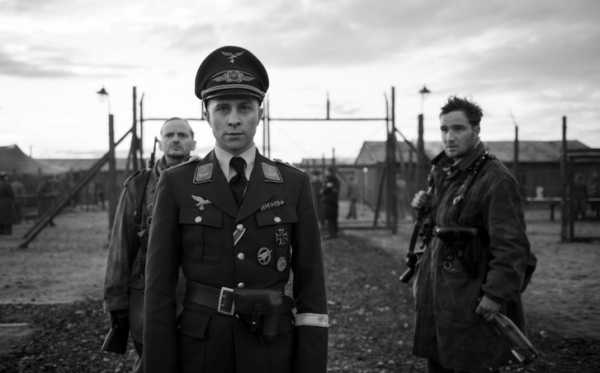 Robert Schwentke’s “The Captain” tells the true story of Willi Herold (Max Hubacher), a corporal in the German Army who pretended to be a captain and took over a prison camp for deserters.

“Captain” Herold encounters a middle-aged private, Walter Freytag (Milan Peschel), wandering alone, who claims to have been separated from his unit during combat. He volunteers to serve under Herold, gets the abandoned car going, and chauffeurs him onward. They soon meet another band of unattached soldiers, and Herold now takes them on as well, claiming to be on a special fact-finding mission in which they can help. Herold is making up his command as he goes along, and as circumstances grow more threatening, he invents ever larger lies—and takes on ever bloodier roles—in order to survive. Stopped at a checkpoint by military police, Herold claims that he’s on a personal mission under direct orders from Hitler himself. When the military police take him and his troupe to a prison camp, Herold—learning that its military commander, Schütte (Bernd Hölscher), is impatient with the slow pace of justice for deserters—openly encourages, oversees, and takes part in the summary execution of the prisoners.

There, Schwentke delivers the movie’s one insightful scene, built around its one fascinating character. The frustrated Schütte is outranked by the camp’s chief legal official, Hansen (Waldemar Kobus), of the Justice Department, who is appalled by the first outbreak of brutal violence and is determined to prevent further killings. He’s a man of law and order, an advocate of procedural justice, and he calls a higher official in the Ministry of Justice for support. But, relying on Herold’s claim of Hitler’s backing, Schütte depends on Nazi Party and Gestapo contacts to overrule Hansen and proceed with the wanton slaughter. The sequence is filmed in a set of duelling phone calls that show with a brisk clarity the pathologies of a dictatorial party’s rule—and the delusions of a well-intentioned apolitical official who hopes to maintain a modicum of fairness and justice within a regime of caprice and depravity.

The idea’s a good one—but it remains a sketch of an idea, just as more or less all of the substance of “The Captain” does. Schwentke, seemingly taking pains to keep the action moving forward, empties the movie of moments in which characters might talk in ways that reveal their thoughts (or fears, or deceptions) without advancing the plot. As a result, “The Captain” is utterly devoid of history, ideology, and context. Rather, it’s constructed like an action film, with the culminating dramatic sequence of the slaughter of the camp’s prisoners, which Schwentke films with a frank gaze at ugliness in beautiful images that drip with a pornographic majesty. He titillates an audience that’s fascinated by violence; he holds back on the most repellent of gore while indulging in the composition and lighting of images that revel in his own power to make it seem somehow beautiful.

There should be no artistic taboo on the dramatization of violence or, for that matter, of Nazi violence, but there is a question of what purpose the depiction serves, the emotions that are being stoked and the ideas that are being realized. Late in the film, Herold—after escaping from the camp with a handful of German soldiers who, alongside him, survived a British bombing raid—forms an “express court justice” brigade, a death squad that goes from town to town murdering and pillaging. Soon thereafter, he’s arrested by German military police, just days before the German surrender. What happens there, in that brief scene of discussion with his three military judges, offers more in substance and thought regarding the regime than does the rest of the film that preceded it. A title card that follows it cites Herold’s arrest, in 1946, by British occupation forces, his trial, and his execution by guillotine. The story suggested in that title card—the retrospective reconstruction, at trial, of Herold’s actions—suggests a far more authentic, analytical film of life in the Wehrmacht as the country was falling apart than the foregrounded spectacle that Schwentke actually made.

What’s more, “The Captain” ends with one of the ugliest, most disgusting pranks that I’ve ever seen in a movie, included along with the end credits scrolling over it. The wartime-era car that’s used in the film and marked as Herold’s “express court” shows up, in a present-day German town, with five or six Nazi-uniformed, gun-wielding soldiers who terrorize and rob ordinary people who are sitting on park benches or strolling. Does Schwentke want to show ordinary people’s inability to resist an armed posse, even (or especially) one in Nazi garb? It’s impossible to know, because Schwentke doesn’t include the voices—the sequence features only grim and eerie music on the soundtrack.

The subject of what people say when confronting Fascist powers and Nazi threats is at the very core of “Scarred Hearts.” It’s set in 1937, in a Romanian seaside sanitarium where a brilliant and ailing young student and poet named Emmanuel (Lucian Teodor Rus) is sent. Emmanuel is suffering from Pott’s disease—tuberculosis of the spine—and the director of the film, Radu Jude, shows his treatment unsparingly (long needles to drain an abscess, a full-body cast, confinement to a bed where he must even eat lying flat on his back). Above all, Jude reconstructs the life of the moment, both mentally and physically. The movie is based on the autobiographical writings of Max Blecher; the movie opens with archival photographs of Blecher at the sanitarium and views of Blecher’s manuscripts and drawings, and Jude’s reconstitution of the era is simultaneously theatrical and fanatical. The details of furnishings, décor, costumes, of gestures and postures and diction, are rendered in poised and wide-eyed images that drink in the material spirit of the age. But that spirit emerges in other details, ones that reflect the politics of the time. Romania was in the grips of a Fascist regime, the Iron Guard, and that regime’s policies, politicians, ideologues, and ideas suffuse the film’s dialogue, with its advocates talking, freely but cheerfully and even satirically, about its authoritarian and anti-Semitic ideologies—and, for that matter, about the significance of Hitler and Germany’s Nazi regime.

Emmanuel, like Blecher, is Jewish, and his perspective on those pathologies is utterly personal and keenly probing, as in a scene with a fellow-patient named Solange (Ivana Mladenovic), in which he describes his own experience of anti-Semitism: “I saw some newspaper boys shouting, ‘Die, dirty Jews!’ I found it more strange than scary. People were talking about death, my death . . . Why is it so easy to shout ‘Die!’ on a street in Romania and people don’t even turn to look? Death is a serious thing. If someone shouted in the streets for the death of, say, badgers, even that might surprise some passersby . . . It’s not that three boys can shout, ‘Die, Jews!’ It’s that their shout can pass unnoticed, unopposed. Like a tram bell.”

In “Scarred Hearts,” Jude doesn’t make any facile correlations between illness and Fascism. His subject is death and also survival: the devoted and thoughtful exertions of the doctors and nurses in the sanitarium help some and don’t help others, cure some and don’t cure others, but their efforts make a small and progressive mark in the long road of history. So do the exertions of intellectuals, such as Blecher himself, which didn’t prevent Fascism or Nazism and didn’t overturn them but which were also markers of humanity and clarity in a sordid time, a light that—as brought forth in Jude’s own film—shines now no less than the advances of science. Jude’s film is a work of resistance; Schwentke’s, for all its obvious judgments and repudiations, is a part of the murk.

Democrats have a legitimate shot to win the Mississippi Senate race