Home Culture Uber and the Ongoing Erasure of Public Life | 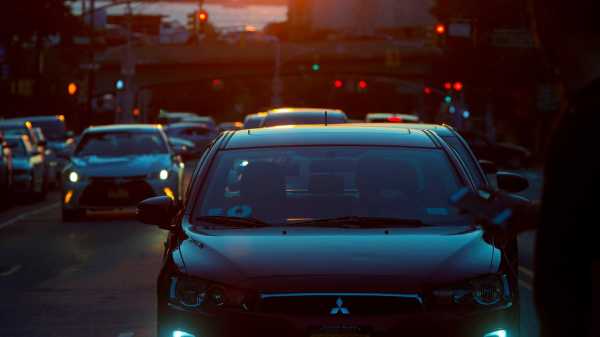 Last September, Uber rolled out a rebranding campaign. A new television commercial showed car doors being flung open and the young and the old crowding in, flying out, and ending up in a small open-air mercado or at a lake. Though there were a few drivers, the image presented was of ceaseless, liberating mobility for passengers, anywhere in the world. Uber changed its logo, too, to a demure sans-serif display—white against a black background, its only flourish a modest pair of mirrored stems attached to the “U” and the “b.” This was a significant change. Since 2016, the phone app and the stickers that identified Uber-enabled cars had enjoyed an image designed partly by the co-founder and then-C.E.O. Travis Kalanick: a circle bisected with a cord, placed against the background of a colorful tile. When tilted ninety degrees counterclockwise, some design and technology journalists noted, it looked unmistakably like a human bent over and seen from behind.

The era of what has been referred to as Uber’s “asshole” logo happened to coincide with the company’s longest stretch of bad press, including multiple reports of sexual abuse inside the company and by its drivers. In 2017, the company’s investors ousted Kalanick. His successor, Dara Khosrowshahi, has made considerable efforts to improve the company’s image in advance of a likely I.P.O. this year. Last October, Khosrowshahi, like many corporate leaders, pulled out of a summit held by Saudi Arabia’s crown prince, in Riyadh, following the murder of the journalist Jamal Khashoggi. (Uber still benefits from vast infusions of Saudi funding.)

The improved design of Uber marks another milestone in the company’s journey to legitimacy. When Uber débuted, in 2010, it was largely an illegal enterprise. It launched in cities without gaining their approval, and for several years it ran a program, Greyball, that helped it locate and elude authorities. Since then, it has spent millions of dollars on lobbying municipal and state governments, and it now operates legally in America and abroad. Over the last several years, it has devastated traditional taxi services, chiefly by operating outside the bounds that regulate those services, such as licensing requirements that cap the number of cars a company can own. Because it enjoys the subsidy of venture capital, Uber does not need to make a profit; in fact, it loses billions every year. These advantages have conferred still other advantages: it has a large food-delivery service and is moving into electric-bicycle and electric-scooter sharing. As it prepares for its I.P.O., which may establish the company’s market capitalization at a hundred and twenty billion dollars, Uber is, among other things, looking abroad, fighting for market share throughout Africa, the Middle East, and South Asia. And on the distant horizon is the autonomous vehicle, signalling a future without drivers—so far, the company’s biggest expenditure.

In short, Uber’s ambitions have grown. What has not changed is the company’s basic goal, which is perfecting the consumer experience. At the heart of Uber’s appeal is the feeling of ordering a car: that liquid transition from pressing a button to arriving at a destination. It’s a fantasy of convenience, though one that comes largely at the expense of drivers—and even, it turns out, of other consumers. In her recent book, “Uberland: How Algorithms are Rewriting the Rules of Work,” the technology ethnographer Alex Rosenblat studies the company’s “algorithmic management,” which forces drivers “to accept the odds that Uber has designed in its favor.” Drivers have no control over pricing, which spikes and dives according to demand. Uber’s system often sends them wheedling or boisterous messages (“Don’t stop now!” “Your next rider is going to be awesome!”), and it encourages them to hunt surge pricing or to flock to arenas at the end of sports games. Not all of this works out for the drivers, but it keeps them on the road.

What is surprising is that Uber’s user experience affects not only drivers but also the design of cities, as well as the lives of those residing in them. Jarrett Walker, a public-transit consultant, has noted that ride-sharing apps have “transformed customer experience—by taking the friction out of the hailing, routing, and paying.” But those apps don’t “seem to be transforming the fundamental nature of the task, or its potential to be profitable.” This is because, very simply, “transportation happens in physical space. The dominant element of cost is the time it takes to drive someone to their destination, and to travel empty between jobs. The app does nothing to change this.” Think of the experience of waiting for an Uber driver, in which you follow a single vehicle making turns on an empty Google Map. Everything is evacuated from the picture except for streets: there is nothing standing between you and the vehicle but time and empty space. For a consumer, the image is ethereal. But the streets are actually full of buildings, people, and other cars. Getting around in a city requires taking up space, which by nature is subject to scarcity. Every new passenger diminishes the experience for the existing pool of customers.

In other words, Uber’s most significant contribution to mobility in cities may be our increasing lack of it. A growing chorus of engineers and traffic consultants have demonstrated that Uber, along with its smaller rival Lyft and other transportation network companies (T.N.C.s)—more commonly known as ride-sharing services (a euphemism, since most rides are not shared)—are sapping transit ridership and clogging streets. A study by the San Francisco County Transportation Authority, published in October, concluded that, from 2010 to 2016, over fifty per cent of the increase in traffic delays in San Francisco were due to Uber and Lyft—and that Uber and Lyft cars constituted an estimated quarter of the total delay on the city’s streets. Another study, of twenty-two large U.S. cities by three University of Kentucky civil engineers, which was presented at the Transportation Research Board’s annual meeting, in January, deduces that T.N.C.s create immediate declines in bus and rail ridership—declines so steep that, in the next eight years, some transit agencies would have to increase service by more than twenty-five per cent just to retain their normal ridership. Cities struggling to keep subways and buses running are being drained of revenue by tech companies and a reserve army of cars. These cars, in turn, coagulate the arteries of the city, blocking the remaining fleet of buses, causing a downward spiral of decreasing ridership and growing traffic.

Despite all of this, Uber claims to support mass transit. “Everyone agrees on the solution,” a company spokesperson said in an e-mail. “We need tools that help ensure sustainable travel modes like public transportation are prioritized over single occupant vehicles.” The company has regularly portrayed itself as offering “first-mile, last-mile” solutions for transit: carrying you to and from the train station or bus stop. In fact, the evidence of its success in this arena is inconclusive. In some suburbs or city peripheries, where these solutions are most necessary, Uber has become a subsidized alternative to the transit to which it supposedly offers a connection, partnering with municipal and transit agencies to replace their existing bus services.

Suburbs have space; cities do not. In midtown Manhattan, where Uber and Lyft drivers spend forty per cent of their time idling without passengers, congestion has reached crisis proportions. In August, New York’s City Council moved to institute a moratorium on new vehicles and a minimum wage for Uber and Lyft drivers. In advance of the vote, Uber sent a warning to millions of users about rising fares and wait times. But a cap is only the beginning of the fight against urban congestion. Transportation consultants have suggested congestion pricing for central business districts, to regulate the number of vehicles on city streets. Even this is a partial solution that wouldn’t address the effects of T.N.C.s in the city at large. A more serious proposal might start with the possibility that Uber is opposed to public transit by design—every ride taken on a subway or bus is competition for its growing supply of cars. The app’s interface—that empty map—declares its priorities: the individual, the vehicle, and a place to be. It erases public space and public lives. The public good is not far behind.

How domestic abusers use smartphones to spy on their partners

US Military ‘Despised Across the Region’ as Iran, Iraq View Strikes...