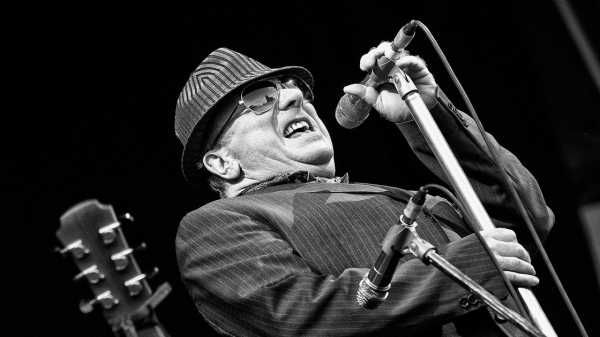 Between 1968, when Van Morrison released the intensely lyrical song cycle “Astral Weeks,” and 2016, when he released the alternately spry, contemplative, stubborn, and spiritual “Keep Me Singing,” the Northern Irish singer-songwriter put out more than thirty-five albums. That’s a record every sixteen months or so—a healthy clip by any standard.

And then he really got going. Since September of 2017, Morrison has released four new records: “Roll with the Punches” and “Versatile” last year, and “You’re Driving Me Crazy” and “The Prophet Speaks” this year. The phrase “new record” doesn’t quite capture the spirit of these releases, all of which stir a handful of original compositions into a larger pot of cover versions of songs by blues, jazz, and R. & B. artists that have inspired Morrison for his entire career. “The Prophet Speaks,” recorded mostly live in the studio and executed quickly, without record-company calculation or interference, offers a spontaneous, intimate snapshot of Morrison and his band.

This approach may seem novel. In Morrison’s view, it’s anything but. “It’s not new,” he told me. “It’s Elvis. It was like this when I started. This is the way jazz and blues artists worked back in the day, the way that country-and-Western artists worked. It was the standard.”

Each of the four most recent records has had slightly different musical coördinates. “Roll with the Punches” drew mainly on soul and blues; “Versatile” was steeped in jazz and the Great American Songbook; and “You’re Driving Me Crazy” was a collaboration with the jazz organist and trumpeter Joey DeFrancesco. “The Prophet Speaks,” released this month, is, in some ways, the strongest of these four. DeFrancesco is back, along with Morrison’s regular band, for a set of covers that are firmly rooted in soul and blues: Sam Cooke’s “Laughin’ and Clownin’,” John Lee Hooker’s “Dimples,” Solomon Burke’s “Gotta Get You Off My Mind,” Willie Dixon’s “I Love the Life I Live.”

Many of these artists are happy returns; Morrison covered both Cooke and Dixon on his epochal live album, “It’s Too Late To Stop Now,” from 1974, and he has collaborated with both Burke and Hooker before. But “The Prophet Speaks” includes more obscure singers as well—James Phelps, whose mid-sixties hit “Love Is a 5-Letter Word” Morrison covers here, and Jimmie D. Harris, a harmonica player and songwriter who performed under the name Shakey Jake Harris and is best known for his collaborations with his nephew, the Chicago blues guitarist Magic Sam.

Morrison has spoken at length about his teen-age years in Northern Ireland and the transformative experience of discovering American blues and R. & B., either courtesy of Radio Luxembourg or his father’s record collection. But he doesn’t see these new records as scrapbooks. “That’s too reductive,” he said. “It’s not about my childhood, or not only. I bought Ray Charles records right up until the end. Not lots of people did, but I did. So, when I cover a song by an artist, I’m not just going back to some early version of that artist. It’s about the whole picture of them.” He has even applied this approach to his own catalogue. On “You’re Driving Me Crazy,” he and DeFrancesco attempted updated takes on some of Morrison’s classic compositions, including “The Way Young Lovers Do” and “Have I Told You Lately.” “It lets me try different arrangements that I didn’t get to do the first time,” he said. “Frank Sinatra recorded ‘South of the Border’ five times. When you keep going back to a song, you can hear new things.”

Morrison is hardly the only veteran artist to return to older songs for inspiration. Rod Stewart released a series of best-selling Great American Songbook records. Neil Young cut a record of idiosyncratic covers in a restored Voice-O-Graph recording booth at Jack White’s Third Man Records studio, in Nashville. The Rolling Stones knocked out an album of Chicago blues covers. Bob Dylan recorded not just one but three full-length LP of songs closely associated with Frank Sinatra. Morrison’s albums are different in that they put the older songs in conversation with original material. “The Prophet Speaks” includes six new Morrison songs that range from punchy pop (“Got to Go Where the Love Is”) to gentle transcendence (“Spirit Will Provide”). The brooding “Ain’t Gonna Moan No More” sketches out miniature portraits of artists like Louis Armstrong and Jon Hendricks, and the title song is a lament that feels like it has one foot in Gerard Manley Hopkins and the other in Lightnin’ Hopkins. The originals fit in seamlessly alongside the covers, as if Morrison is lowering a bucket down into a well, pouring water in after it, and then raising up the bucket without worrying about which water came from where. “That’s because my music incorporates blues,” Morrison said. “It’s based on blues and soul, which were based on gospel originally. I think that everything is represented in what I do: folk, country, R. & B., blues, Chicago blues, folk blues, some rock and roll.

Morrison hopes to continue working in this vein, maybe on a country album. “It’s a matter of getting people in the same place at the same time, which is difficult to do now,” he said. “I’ve wanted to do something with Nashville for a while. But people have this tendency that they don’t do live work as much anymore. Lots of people now want to do tracks and send them to people. That doesn’t turn me on.” He’s worked with tape exchanges, too, most notably on the album “Duets: Re-Working The Catalogue,” from 2015, which found him covering his own songs with guests vocalists like Bobby Womack, Mavis Staples, Steve Winwood, and others. “Some of that was live,” he said. “I was able to bring some of the singers to London for a week. But some of it was not. I don’t really like doing that. And with the way people communicate now, everything is very fragmented. If people are any good, they’re working. They’re busy. I’m busy.” Working quickly with a live band also allows him to sidestep the increasingly laborious way in which records have come to be made. “People took longer and longer to make them because of more equipment,” Morrison said. “It was two track, then four, then it went up and up to forty-eight, with more equipment. Basically, the people who had the equipment—engineers and producers—controlled the process.”

A live method, he says, is more organic, less mediated, and more fun. “I don’t feel like I’m in the box,” Morrison said. “I feel like I’m back in the fifties and I’m saying ‘Hey, man, don’t be a square.’ When I first started, I was a blues singer. That’s what I wanted to do. That got sidetracked for a long time. I went down lots of rabbit holes. At some point, I wanted to go back to what I really wanted to do. What’s the point of being successful if you can’t do what you want to do?”

Ireland bounce back from England mauling to beat Wales in Cardiff