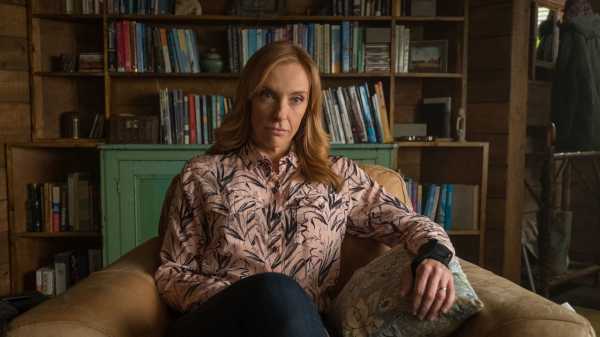 The title card for the new Toni Collette show not only identifies it as “Wanderlust” (Netflix) but also supplies a dictionary definition of the term. This signals the program’s efforts to elevate bluntness to a type of style. The six-hour series, created by the British dramatist Nick Payne, who overhauled his 2010 stage play of the same name, follows the extramarital longings and excavated traumas of a psychotherapist, played by Collette. She and her schoolteacher husband (Steven Mackintosh) bemoan their “flat-lining sex life” and decide to apply the old external defibrillators: they open their marriage to “sanctioned infidelities,” with complicated consequences.

In some ways, “Wanderlust” is a self-analytic over-forty fantasy. It’s also a self-help soap opera espousing a practical philosophy of sex, love, and self-knowledge. Always, it’s conscious of its heavy hand. Collette happens to be excellent, but to enjoy her performance in full, you must accept without judgment that her character, whose true struggle is to confront grief, is named Joy.

The actual writing is rarely so unsubtle, except when Payne yields the floor to earnest speechifying about carnal needs and emotional desires. The dialogue is quite good, with a texture combining dry wit and chewy passion, and the moments of quietness within the exchanges are fantastic: awkward pauses, anxious lulls, mute grasping to gather thoughts and courage. Motorists idle with their ideas as their wipers thump away the rain. The visual scheme of the show heightens the tension of the silences. The compositions of “Wanderlust” favor stark symmetry, severe mirrorings, and characters facing one another with six or eight feet of charged air between them as they undress for sex or bare their souls. An awful lot of conversations transpire across interior archways and precious thresholds. The distancing effect of this seems intentional. The show asks to be read like a novelistic character study. Its literary genre might be softcore Updike.

The first face-to-face confrontation across the center of the frame finds Joy and her husband, named Alan, in their bourgeois-intellectual bedroom, and the strenuous parallelism of the visuals begins to find its equivalent in the plotting. The couple try to renew their sex life after her hip bone, broken in a bicycle accident, has finally healed, but the thrill is gone, and each looks elsewhere with lusty eyes. After a colleague’s car breaks down, Alan offers her a ride and strays into her bed. After her bicycle gets a flat, Joy accepts a lift from a physical-therapy classmate, and the two hook up in her office. The schematic pattern of all this grows ponderous. Joy and Alan each confess their betrayals immediately, and agree to indulge in casual sex outside of the marriage. “It’s excitement and adrenaline instead of worry and fear,” Joy says, in an early intimation that she’s indulging in escapism and avoidance.

Meanwhile, the couple’s three children, who range in type and age from gawky teen to mildly depressive yuppie fledgling, bolster the main themes by jaunting and plodding throughout their own romantic lives. In the least persuasive vignette, the middle child strikes up a companionship with a pastry-baking neighbor lady who has recently awakened to her homosexuality. In the most compelling one, their teen-age son galumphs toward losing his virginity, torn between affection for a close female chum and his infatuation with a glamorous new classmate who shares his interest in Jonathan Franzen and Zadie Smith—names dropped, one senses, so that viewers may congratulate themselves on their own literacy.

But back to that bike crash, which is not only a pungent metaphor—doctor, heal thyself!—but also a decoy. It emerges that Joy’s accident is connected, coincidentally but directly, to a recent instance of agony, which in turn resonates against a life-defining experience of loss. “Wanderlust” keeps these cards tucked up its sleeve until the fifth episode, the entirety of which is devoted to a therapy session in which Joy’s own shrink (Sophie Okonedo) leads an expedition into suppressed memories and delivers an essayistic oration on emotional blockage. It’s a fine monologue, well delivered, and contributes to the show’s salience as a character study. But to withhold this information, from the development of a drama about “sanctioned infidelities,” isn’t simply to devise a clever structure. It’s just cheating.

Cheltenham Festival Day One tips: Footpad can be foot-perfect in Arkle

What next for the Patriots following Super Bowl LII defeat?