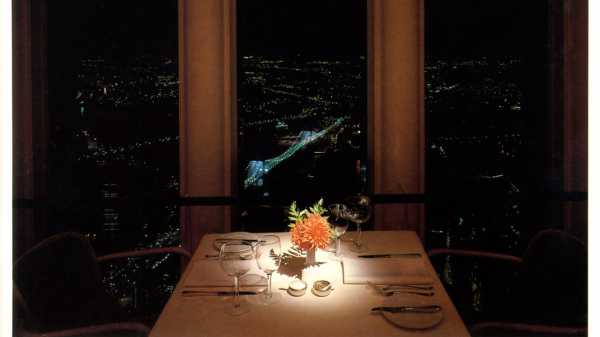 If you booked dinner at Windows on the World between 1981 and 1993, you probably spoke to Deborah Rodi on the telephone. Known to all as Deb, she managed reservations at the restaurant, which was perched on the hundred-and-seventh floor of the North Tower of the World Trade Center. Windows on the World was part of a little gang of night spots high in the North Tower. There was the Greatest Bar on Earth and another restaurant called Wild Blue. At Windows on the World, the tables bore white tablecloths and little vases, each with a single flower. Men had to wear jackets or they could not take their tables. Finance was transforming the country and taking over the city—Deb watched nineteen-eighties New York decide on its identity. She remembers Grace Kelly and Andy Warhol coming in. She remembers the day, in 1983, when she didn’t ask the maître d’ whether his purple swelling was Kaposi’s sarcoma, because she didn’t want to offend him and she had only learned about the AIDS virus that morning. She was twenty-three years old when she started the job, and commuted to work from Jersey City.

There were unsettling aspects to working so high up. The hanging plants in Deb’s office, one floor down, swung around as wind buffeted the skyscraper. Deb remembers a co-worker named Gerald, who would eavesdrop, she says, on other building workers, and once heard them talking about small, unchecked fires in the Trade Center’s two buildings. “Something is going to happen here one day,” he told her. During the twelve years when she worked at the restaurant, she took home a variety of objects, in an absent-minded, memento officii sort of way.

Now some of those objects are on display: the young artist Rose Salane has curated a selection of Deb’s past for a show at Company Gallery on Eldridge Street. Salane met Deb after bidding on a postcard from Windows on the World that Deb was selling online. (The show is titled “Indigo237,” after Deb’s eBay account.) Deb, curious whether Salane had some connection to the restaurant, wrote her an inquisitive message, and they began a correspondence. In addition to the objects Deb collected, the show includes fictional newspaper articles that report scenes from Deb’s memories. In an article titled “How to Cut a Cigar 1991,” we read about Deb idly playing with a cigar guillotine during a safety meeting, as employees are taught how to recognize a bomb disguised as a pack of Marlboros. They don’t even sell American cigarettes here, Deb thinks, as the meeting drags on. Then a man named Bill asks Deb to show her colleagues how to cut cigars for their customers. 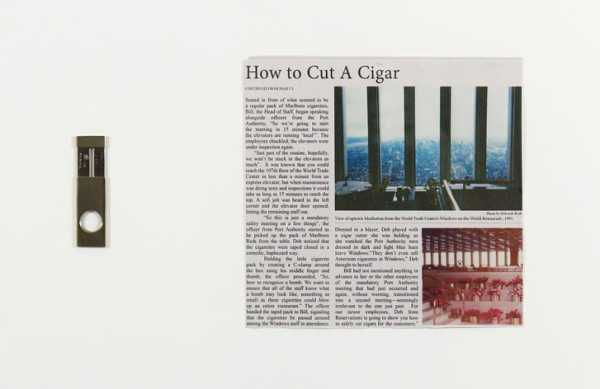 “How to Cut a Cigar”: inkjet on newsprint, silver cigar cutter from Windows on the World (2018). 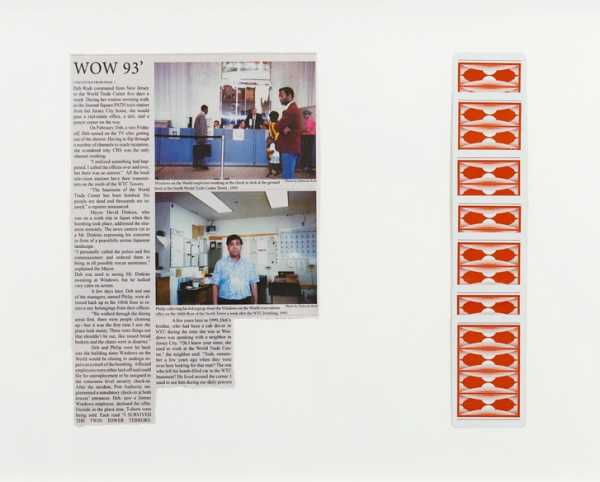 The cigar clipper is in the show, along with a salt cellar, a dish, and Deb’s business card. There’s a promotional postcard that is illustrated with one of the elegant tables that filled the restaurant, a little, spotlit corner of intimacy against the vast darkness outside the high window. Salane has also sculpted objects based on restaurant equipment, and included several pictures taken by Deb, who is a keen photographer, and carried a camera to work with her often. (She wanted to go to art school but never did.) In one picture, we see employees temporarily working as security personnel, in 1993, after a man named Eyad Ismoil detonated a massive truck bomb in the parking garage below the North Tower. Six people died, and hundreds were injured. Employees had the option to work security, as temps, until the restaurant was back up and running, or to take unemployment. Another photograph is a simple shot out of the window.

After the 1993 bombing, Deb quit her job, afraid to keep working in a place that was a target. Salane was just a toddler at the time; she was born in Queens in the early nineties. The towers loomed over her childhood, like twin totems of the big city. She told me, when we met at her studio, near the Sumner Houses in Brooklyn, that she was “not actually so interested in 9/11.” Instead, she’s interested in the years that 9/11 has occluded, with the backward shadow that it casts on history. (The plane that hit the North Tower struck well below Windows on the World; the seventy-three employees and eighty-seven conference attendees who were in the restaurant at the time were all killed in the attack.) For Salane, the World Trade Center is a symbol of the whirlwind of capital that began buffeting New Yorkers in the nineteen-eighties. As the Reagan White House deregulated U.S. markets, and the Koch administration cut New York City taxes, the Financial District thrived. Meanwhile, the AIDS crisis went unaddressed, and Nancy Reagan’s war on drugs incarcerated thousands of New Yorkers. 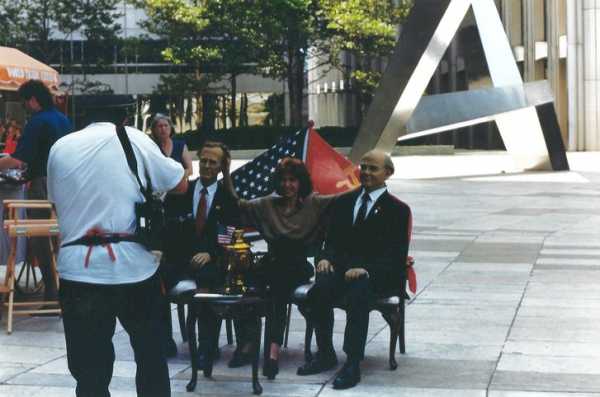 And there in the middle of it all was Deb, one young woman in her watchtower. Looking at the little objects that she brought home from work, against the backdrop of those giant buildings, the scale of this history becomes overwhelming. The history of the Twin Towers is about a decisive change in the political course of the world; it’s also about a salt cellar with a soft burnish to its exterior. It’s about a cigar clipper held in the hand of a rich man. It’s about New Yorkers who died of AIDS, and New Yorkers who were killed by terrorists. It’s a young woman looking out the window of a tall building. It’s a plant that cannot stay still, because the whole place is swaying.

Everything in Salane and Rodi’s show, whether it’s a postcard or a memory, is the opposite of a skyscraper. These objects, in their smallness and particularity, resist the enormous scale of September 11th and insist on the everyday lives and labors of individual people. As Salane writes in her show notes, the exhibition “seeks to enter history through the pedestrian entrance.” She and Rodi have created a venue and a frame for old narratives to come forward, and to look us in our contemporary eyes.

Florida’s GOP candidate for governor wants nothing to do with Trump’s...

Snow Competition: Illustrations from the Women’s Alpine Combined Slalom at the...