Home Culture “Westworld” ’s Season 2 Finale and the Cautionary Lessons of “The Matrix”... 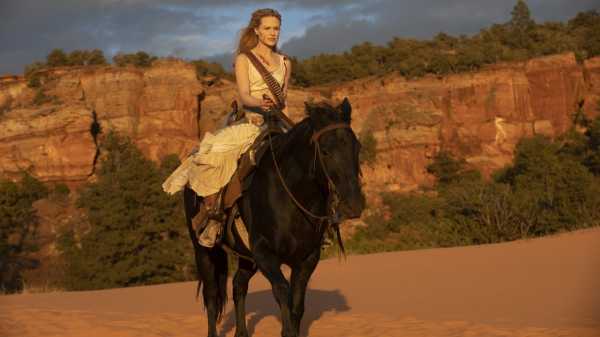 “Westworld,” for all of its shiny, futuristic technology—its dazzling computer screens, whirring machinery, and clever robots—has been, through its second season, which ended on Sunday night, a show about guns, that simplest and cruellest of human tools. The characters are forever menacing each other with firearms, which is fitting for a show that is, or was in the beginning, based on Michael Crichton’s 1973 movie about a Western-themed amusement park in which humans (known as guests) pay lots of money to wear handsomely distressed cowboy couture and vacation among lifelike robots (hosts) designed to suffer for their amusement. But even the bloodiest Westerns manage a sense of proportion and pacing; guns as a narrative device normally build tension and instill dread in the viewer. It’s hard to do that when they are constantly going off.

Two seasons in, every major “Westworld” character has been shot, most of them several times. A quick, and highly selective, rundown: Robert Ford (Anthony Hopkins), the architect of the park, was shot in the head by one of his robot creations, Dolores Abernathy (Evan Rachel Wood). Dolores was shot in the head by Bernard Lowe (Jeffrey Wright), a robot that we thought for a while was a human. Bernard shot himself in the head once, too, and so did another robot, Teddy Flood (James Marsden). One of the few main players to keep his cranium intact, William, also known as the Man in Black (Ed Harris), the human (or maybe not) owner of the park, has been shot in the arm a few times and in the chest a bunch, and, in the finale, managed to shoot off most of his right hand. (Humans and humanoids have occasionally been dispatched in other ways, too—gored by animatronic bulls, decapitated by katanas, sliced by orthopedic saws, etc.) No one stays dead for long, though: hosts can be brought back to life with a quick trip to the park’s reanimation lab. Dead humans find new life as computer code.

All this not-dying might have been played as the one sick joke on a show that is otherwise short on humor. Instead, the showrunners, Jonathan Nolan and Lisa Joy, stage the murderous mayhem as ornate battles and tense showdowns with soaring music, dramatic slow-motion, and shots of the surviving characters wailing in despair. The principal story line of the second season followed Dolores, Maeve (Thandie Newton), and a handful of other awakened and newly powerful hosts trying to seize control of their own lives and punish the humans who had enslaved them. The humans, meanwhile, pursued their own ends: William was on a quest to destroy the park, and the massive server of human data that it has been collecting from its guests during the past thirty years; corporate executives who run the park were trying to export that data back to the outside world. As the theme park’s various safeguards and reanimation devices fell away, in a plot put into motion in the first season by the godlike Dr. Ford, the stakes finally promised to be real. Hosts could, the audience was told, now really kill humans; and hosts themselves might be able to die, too. But, then, no one really did. Soon it became clear that, for the most part, the characters’ doings amounted only to elaborate and expensive-looking robot-on-robot violence, with immortal consciousnesses fighting to deaths that would never truly come—leaving the viewer with emotional whiplash that threatened to harden into apathy.

The show would simply be a wearying grotesquerie were it not for the puzzles that its showrunners baked in from the beginning, and have strung along nicely since. In Season 1, the mysteries were bountiful—from the practical (as in, how does everything in a robot theme-park work?) to the metaphysical. The most pressing questions were about identity, and the season’s big reveals—that Bernard was a host after all; that multiple time lines had been playing out simultaneously—left enough bread crumbs along the way to satisfy an ardent group of Internet fan-detectives. (Nolan and Joy have long been savvy in their interaction with devotees online, answering detailed questions on Reddit and even, before the second season aired, posting a YouTube video that promised to share the upcoming season’s biggest secrets, but turned out to be a cheeky Rickroll.)

By the beginning of Season 2, many questions remained. Which other seemingly human characters might also be hosts? (The hot debate this season was whether William was more machine than man.) What does the wider human world outside the park consist of? What year is it? Is this all taking place on Earth? Underground? On an island off of China? On Mars? Sunday night’s finale answered some of these—including in an after-the-credits scene where we learn the truth (or something approaching it) about William—and teased out others for the seasons to come. At this point, only the most dedicated “Westworld” scholar could say for sure which characters are human and which are hosts, or what the distinction between the two even means. Everyone, it seems, has a soul, even if it’s just rooted in ones and zeroes.

The problem with building a show on baroque puzzles is that, eventually, the writers have to offer the keys to solve them. And the answers normally turn out to be less thrilling than the fan theories that are nurtured along the way. “Westworld” shares a producer, J. J. Abrams, with “Lost,” the original sci-fi maybe-on-a-real-island-or-not mystery show, which ran for six increasingly confounding seasons, on ABC. As talk in “Westworld” this season turned again and again to doors and secret underground compounds, and characters argued over where to go or what to do only to have those mini-plots quickly fizzle out, it was hard not to recall how “Lost” got stuck in its own weeds, and left its audience there. The best episodes of Season 2 of “Westworld” were the ones that provided a reprieve from the main story line, offering deep dives into the lives of secondary characters, like the hosts in a parallel Edo Japanese theme park called Shogun World or Westworld’s Native American hosts, led by Akecheta (Zahn McClarnon), who had awoken to the fact that they had been living on repeating loops engineered by outside forces.

Meanwhile, the show’s unrelenting self-seriousness makes a viewer long for another of Crichton’s theme-park-gone-wrong creations, “Jurassic Park,” the latest movie installment of which débuted last weekend at the box office. At this point, “Westworld” desperately needs its own Ian Malcolm—who famously quipped about the broken dinosaur park, “if the Pirates of the Caribbean breaks down, the pirates don’t eat the tourists”—someone with the sense to wink at a few of the plot absurdities and puncture the gloom. For a while, on “Westworld,” that role was played by Lee Sizemore (Simon Quarterman), an impish park employee, but by Sunday’s finale he’d gone true believer, delivering a heroic monologue before dying (or not) to save the robots he used to write stories for.

The most apt “Westworld” comparison, though, might be to the “Matrix” trilogy, a series that was also about the intersection of human consciousness and computer code, which began as dazzling fun and ended up as a lousy seminar. Good “Matrix” was the first film of the trilogy: dazzling action sequences and innovative visual flair mixed with just enough dorm-room philosophizing to make all the gunfights seem edifying. Bad “Matrix” was the stuff of the sequels, where the characters were stranded in spare white spaces, exchanging crude exposition in a desperate attempt to bring the audience up to speed. For most of its first two seasons, “Westworld” managed to stay in Good “Matrix” territory, but there were a few clunking moments in Sunday night’s finale that tipped over into Bad “Matrix”—a character arriving in a room and saying to others, essentially, We are now standing in this room, the place where the very important thing is—making the prospect of several more seasons seem less like a diversionary game than a chore.

Yet, for now, “Westworld” retains enough intrigue—and enough beautiful scenes of Monument Valley and luxurious and stylish images of the future—to keep our attention. A key to enjoying the show is to take it on its own icy terms—to accept its dim view of humanity, and begin seeing the characters less as physical bodies than as the minds or data that those vessels contain. The biggest reveal of the finale is that, up until now, we’d been identifying with the wrong race, hoping for evolution or enlightenment from the human characters, when it was their stories that were really trapped in loops of fate. The hosts, with their more complicated and elegant source code, are the ones capable of free will and change. In one of the episode’s Bad “Matrix”-like tour of ideas, Dolores and Bernard travel inside the server that contains all the human data that has been tracked at the park over the years, which have been packaged neatly as books—a volume for each human mind. The system manager controlling the server, personified as another character that we’d been told was dead, explains that “a human is just a brief algorithm, 10,247 lines” of code. “Is that all there was to it?,” Bernard asks, astounded, serving briefly as an avatar for the audience. “They are deceptively simple,” the guide explains. If that’s true, then “Westworld” would be wise to take pity on us in its plotting—there is, after all, only so much that we can understand.

What Manafort’s reported plea deal talks with Mueller might mean

Joe Kavanagh: ‘Cork should be far more competitive against Kerry than...