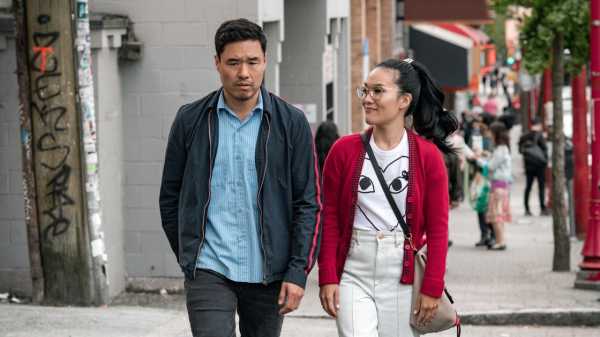 The first time I came across the trailer for the new Netflix film “Always Be My Maybe,” I was thumbing through Twitter during the tedium of a rush-hour subway ride. “A rom-com starring Ali Wong and Randall Park,” someone wrote above the clip. Last year, I watched and loved “Crazy Rich Asians,” the first major Hollywood film in twenty-five years to star an all-Asian cast. But that story was set in the palatial opulence of ultra-wealthy Singapore, with priceless jewels and private jets. “Always Be My Maybe,” by contrast, seemed drawn from the lives of people I knew: working-class Asian immigrants and their children. In the trailer, Sasha Tran (Wong), a thirtysomething chef in San Francisco, meets up with her childhood friend Marcus Kim (Park) at a farmers’ market and gushes about the “insane, freaky-ass sex” she’s been having with her new boyfriend. I felt utter joy watching Wong proceed to demonstrate their orgiastic gyrations—and seeing two romantic leads who looked and sounded like me. Among Asian-Americans on Twitter, the excitement over “Always Be My Maybe” felt like the intense expectation that gathers before prom night. “I have a feeling I’m going to laugh and cry continuously through the entire thing,” the Chinese-American writer Celeste Ng wrote, in a thread on the movie. “My best explanation was that you never got to see Asian people just doing normal things.”

Ali Wong, the standup comic who made a pair of raunchy Netflix specials, both filmed while she was seven months pregnant, has said that “Always Be My Maybe” originated in a tossed-off comment she made in an interview with this magazine. Three years ago, in a Profile by Ariel Levy, she mentioned that she and Randall Park, a longtime friend (who is best known for his role in the ABC sitcom “Fresh Off the Boat”), wanted to make their own version of “When Harry Met Sally”—the kind of movie they wish they could have seen in their teens and twenties. Like “When Harry Met Sally,” “Always Be My Maybe” charts the progression of a longtime friendship that converges, diverges, and converges again with romance. The film begins in the nineties, in San Francisco (Wong’s real-life home town), where Sasha is a latchkey kid whose Vietnamese-immigrant parents are too busy running their store to make dinner (thus giving the grade-school-age Sasha the resourcefulness to concoct meals from rice, Spam, and the Japanese seasoning furikake). Marcus is her adorkable, over-eager next-door neighbor, who invites Sasha over for his Korean mother’s kimchi jjigae (or else, as he laments to Sasha, “I’m gonna be the kid with the leftover thermos soup, and I don’t want to be the kid with the leftover thermos soup”). Their relationship suffers a blow when the pair have fantastically awkward—and comedically divine—sex, in the back of Marcus’s beat-up Corolla, as Sasha is preparing to head off to college.

Sixteen years later, Sasha is a superstar chef in Los Angeles, bent on expanding her restaurant empire. When a new opening takes her back to San Francisco, she runs into Marcus. Whereas Sasha has catapulted to fame and fortune, Marcus has stood still in time: he shares a home with his widowed father, installs air-conditioners for a living, and drives the same Corolla in which the pair lost their virginity together a decade and a half earlier; his inertia is sustained by a substantial amount of weed. But the two get along as well as they did in childhood. Awkwardly at first, they reconnect as friends and then proceed, tenuously, to rekindle their romance.

I watched “Always Be My Maybe” alone in a theatre in Manhattan, acutely aware that this was a mainstream movie of America’s favorite variety—the rom-com—and of the fact that a multi-ethnic audience had sat down to watch two Asian leads fall in love. More than anything else, it was the film’s depictions of growing up in the U.S. in an Asian home that made my heart yelp: the inviolable ritual of removing shoes before entering a house; the plastic-covered furniture in Sasha’s parents’ home, which so resembled my own childhood living room. To watch these mundane, culturally specific details exposed on the big screen—the very things that I and many Asian-American kids once wanted to hide—felt quietly radical.

Like me, Sasha and Marcus came of age in an America that drew a firm line between what was Asian and what was mainstream. Kimchi jjigae sat on one side of that line; “Wayne’s World” (which inspires the costumes of the young Sasha and Marcus one Halloween) sat on the other, even if our lives contained both. To be Asian-American, then, was to be necessarily adept at compartmentalization, to be aware of one’s capacious sense of self without necessarily knowing how to navigate it. There is a scene at the beginning of “Always Be My Maybe” in which Sasha turns on the TV in her family room to watch “Clarissa Explains It All,” the popular nineties sitcom, much of which takes place in the living room of a middle-class white family named the Darlings. The moment flashes by in about a second and a half, but I was briefly transported to my own time watching the show as a twelve-year-old, certain that Clarissa’s family embodied an Americanness that my own cultural peculiarities would never allow.

That many of those peculiarities sat at the intersection of culture and class was something my teen-age self would have had trouble articulating, if I’d had a mind to interrogate it at all. Many of my favorite moments in “Always Be My Maybe” involve comically frank exchanges about money. When the child Marcus requests some pocket change to go out with Sasha on a Friday night, he makes the ask strategically at the dinner table, with a friend present. I was reminded of times when I’d similarly ambushed my own parents, knowing that I was less likely to be met with rejection in front of company—saving face was even more important than thrift. Sasha’s parents, meanwhile, avoid engaging in any service that requires gratuity. “Their worst fear in life is for me to have to tip somebody!” Sasha explains to her assistant, who makes the mistake of ordering her a car service from the airport. The line got only a few light chuckles at my theatre, but I felt the wondrous relief of being seen. My own anxiety about taking cabs, to this day, feels linked to having grown up in a financially unstable immigrant household, and to the Chinese aversion to tipping, though I would never have felt comfortable making those connections on my own, even among friends. Were we poor or simply cheap, I had often wondered privately. And did being a certain kind of Asian immigrant—air-dropped in an alien, competitive, hyper-capitalist world, as a member of the service industry (as my mother was, and Sasha and Marcus’s parents are)—perversely make us less generous to those who shared our lot?

Despite Sasha’s resentment toward her workaholic first-gen immigrant parents, she has become a version of them, absorbing their values and world view even as she has risen past them on the socioeconomic ladder. When Marcus’s father asks Sasha about her older fiancé—who, unbeknownst to him, has postponed their engagement—Sasha’s first concern is saving face. When she boasts about her boyfriend’s athleticism and Instagram following, she is playing a version of her own tiger mother, parading her achievements as reflected in her accomplished and wealthy mate. After Sasha and Marcus begin dating, the two cannot agree on the kind of life they want to lead. During one blowout, Marcus expresses contempt for the “elevated Asian cuisine” that Sasha serves at her restaurants and accuses Sasha of sacrificing authenticity for profit and “catering to rich white people.” “If you think I’m such a sellout, why are you dating me?” Sasha retorts. “Don’t shame me for going after things!” She has a point; by the time Marcus voices his discontent, he has moved into her mansion and is enjoying the fruits of her go-getter grit.

For second-generation immigrants, an ambition to assimilate and an ambivalence about that ambition are opposing forces that both define and compromise our sense of self. Searching for love can be more freighted for us—weighed down by the considerations of duty, family, and of finding someone who understands the frictions in our lives. In the golden age of the romantic comedy—from the nineties to the early two-thousands—these experiences could not be found onscreen. Now, finally, in a few films, they can. “Always Be My Maybe,” like “Crazy Rich Asians,” is not a flawless or even a great movie, but for me it is a profoundly satisfying one. To watch my own existential questions explored onscreen, packaged into an old-fashioned rom-com, made them real in a way I once believed only Clarissa Darling’s living room could be: a private space unlocked and understood, unequivocally, as American.

Immigrants Account For Over Half of Norway’s Population Growth – Report

Five things we learned from the Masters