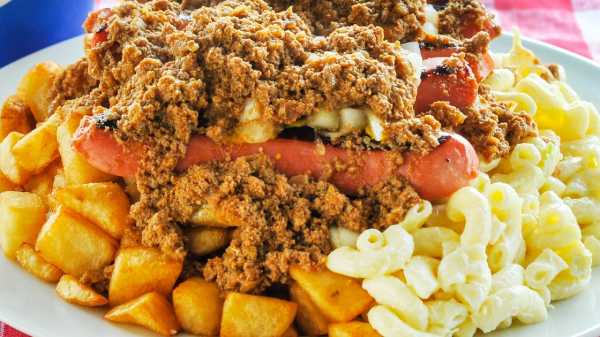 “Describe to me a ‘garbage plate,’ ” a woman in a biker jacket said on a recent Saturday, approaching a table of meat for sale in Gowanus, Brooklyn, on a street equidistant to a waste-management business and a Whole Foods.

“Heaven on earth,” the cook replied, spreading his arms in praise. More specifically, it is “homemade macaroni salad, homemade fries, hamburger, cheese, hot dog,” he said. “Then I’ll hit it with some hot sauce.”

Garbage plates are the late-night food of western New York, a region with a culinary ethos that can feel more than a few counties away from what’s au courant in the gentrifying parts of Brooklyn. But the meal was offered, for eight dollars, at “Buffalo City Fair,” a day-long celebration of New York’s second-largest city, a place best known seven hours southeast for—well, what?

“It seems to me like one of those forgotten cities of New York State,” a red-lipped lawyer said as she smoked in the cold sun outside the Bell House, the venue for the event. “I’ve never been there,” she added, but her boyfriend, a butcher’s apprentice, was introducing her to his family in Buffalo in two weeks. “I’m from the Upper East Side,” she said. “To the extent that anyone thinks about Buffalo, they think about Niagara Falls.”

“Niagara Falls is bullshit,” her boyfriend said, one hand on his girlfriend’s back and the other gesticulating with a cigarette.

Over the phone, later, Varghese Chacko, the executive producer of City Farm Presents, the event’s organizer, explained how it came together. “We were talking about western and upstate New York—and actually I was just married in Phoenicia, New York—and how the trend is to go north,” he said. “It’s a very common ideal.” Upstate New York, where I grew up, has sold upscale out-of-towners on cider doughnuts, bed and breakfasts, and picking your own fruit for a fee. Western New York, where I went to college, generally offers less material for Instagram. “So we felt like it was a good look to widen our lens a bit. Buffalo’s got a great music scene, and a passionate population.”

And the garbage plates, he said, “were flying off all day.”

At the event, a woman from Tennessee and a man from Long Island got up onstage to spin a raffle wheel in front of a video montage of recycled Buffalo Bills games. A roaming polka band from Staten Island navigated tables stacked with the Labbatts and Miller Lites that the crowd of five hundred-plus enthusiastically emptied for three dollars a can. “This is unusual,” an immersive-theatre manager, originally from Florida, said of the non-artisanal beverages. (“I’m a Lagunitas girl,” her Californian friend offered.) “But it’s the novelty. And the price of it.”

“It’s nostalgia,” a former Buffalonian, now a Brooklynite of thirty-six years, said, as she photographed her heavily dressed hot dog. “Buffalonians love Buffalo food. All you’ve got to do is post a picture on Facebook, and everyone goes bonkers. You’ll get ninety comments from Buffalonians. ‘What did you have, how did you have it? What toppings?’ ”

“Chicken wings,” she went on, elaborating on the importance of these details, “have to be deep fried, not breaded, and made with Frank’s hot sauce. Plus, there’s usually, like, liquid margarine. I mean, it’s disgusting. But you put it in bowls and mix it. The wings have to be crispy. I don’t make them at home because it stinks.”

Her husband jumped in to explain that, really, fitting in in Buffalo is not as complicated as this recipe might suggest. It’s just like Brooklyn, he said. “You drink beer, and you pontificate. And you drink beer and pontificate.”

Guests roamed in and out of the venue, carrying beef on weck and clamshells of macaroni-and-cheese-stuffed pierogies. (Veggie burgers were also available.) A seated couple, from Hell’s Kitchen, considered what it is about Buffalo that appeals. “For my job, I’m up there ten times a year, and I got to appreciate it,” one of them said, drinking a cider. “People are always throwing it under the bus. The weather is terrible. But it has some pretty cool restaurants and cocktail bars that remind me of what you’d find in Brooklyn.”

“It’s like an affordable Brooklyn,” his boyfriend, originally from Illinois, added. The couple wasn’t eating. “We have dinner reservations,” he said.

Earlier, outside, the cook, a former upstate New Yorker now living in Brooklyn, had a slightly different theory. “I think three-dollar Labbatts get people through the door,” he said. He paused, thinking some more. “They’re jealous.”

“Of the love,” the woman in the biker jacket said.

With two hours to go, the venue ran out of Labbatts. “They would not have done that in a Buffalo bar,” a University of Buffalo graduate said to her boyfriend. He agreed. “There would have been a riot.”