Home Culture What Is Lost in Hedi Slimane’s Celine | 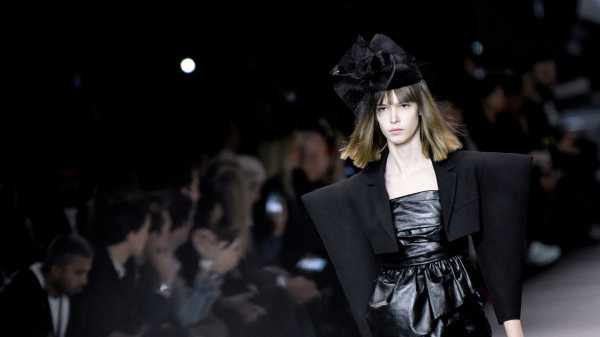 On Friday night, in Paris, the fifty-year-old designer Hedi Slimane débuted his first collection as the creative director of the French luxury fashion house Celine. When I went online to check out the ninety-six-look collection, on Friday afternoon, in New York, I did so wearily: it had been a week, not just for me but for most American women who have eyes and ears and access to a Web browser. Just a day earlier, we had witnessed testimony before the Senate Judiciary Committee from Christine Blasey Ford, congenial in a crisp navy-blue suit, who described her memory of Brett Kavanaugh, the Supreme Court nominee, sexually assaulting her at a high-school party, thirty-six years ago—an allegation that Kavanaugh has denied. As she spoke, in the course of several hours, a single lock of blond hair kept falling in front of her face. Her persistent efforts to put it back into place—tuck, tuck, tuck—felt like some grim metaphor.

Ford, a university professor and a mother of two, was on my mind as I turned to Celine, which, until recently, was run by the forty-five-year-old British fashion designer Phoebe Philo. During that time, the label became synonymous with working women who wanted to look pulled together in a flash. Philo’s own hair, which always seems spontaneously and artfully tousled, is famous. Philo often poses for photographs with a strand poking out of a turtleneck at an awkward angle, or escaping across her forehead, or tumbling out of a loose, low bun. Philo is casually glamorous; her aesthetic has always been a sumptuous spin on picking up a slouchy sweater off the floor and strutting out the door. This is what she brought to Celine when she took the reins, in 2008—a sense of luxurious happenstance, that women could be scraggy and sophisticated at the same time. 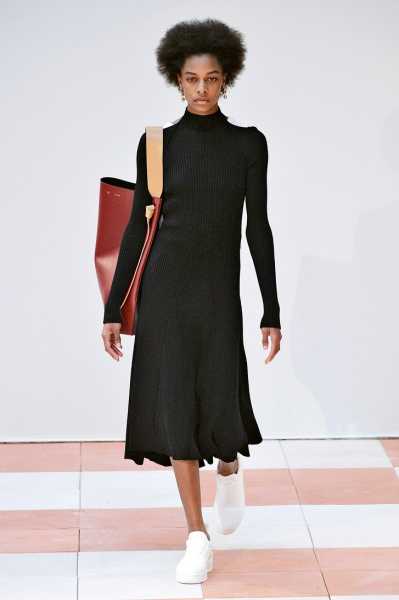 A model in Celine’s Autumn Winter show at Paris Fashion Week in 2015.

A lot of this vision came, I imagine, from the fact that Philo already had two young children when she took over the house (and gave birth to a third during her tenure there). Before Celine, when she became the creative director of Chloé, in her twenties, her mood board was more baggy and bohemian, a series of flowy wide-leg pants and peasant blouses in the mustard and avocado hues of seventies shag carpeting. At Celine, she pared down and refined, ushering in a minimalism that wasn’t dull or austere but cozy and comforting. For a decade, she made clothing that women really wanted to wear (or just dreamed of wearing, really, because who among us can actually afford a five-thousand-dollar trench?). She showed chocolate leather and architectural poplin shirts, oversized dusty-pink silk blazers, and asymmetrical pleated skirts the color of lemon chiffon. She did jaunty basics before they went mass, selling women a fantasy of lived-in elegance. Her Celine was still a rarefied luxury brand, but her style permeated the culture beyond her direct consumers. For an ad campaign in 2015 that went viral, she convinced the then eighty-year-old writer Joan Didion to pose in a basic black sweater and large sunglasses.

Slimane, who took over as the creative director of Celine in January (and promptly did away with the accent over the “E”), began overseeing the ready-to-wear men’s collections at Y.S.L. at only twenty-eight years old. At that house, which he re-christened Saint Laurent, he slenderized male formalwear, pairing slim suits with a thin sliver of a tie. After he left Y.S.L. to direct menswear at Dior Homme (and, later, back at Saint Laurent), he started to dress and collaborate with musicians, creating tailored cyborgian costumes for Daft Punk and outfitting Courtney Love and Marilyn Manson in onyx leather. He photographs many of his muses himself, usually in black and white, asking his subjects to stare longingly into the lens. He celebrates the period of life during which a person is hungriest: pre-job, pre-consequences, pre-cellulite. As such, he uses only waifish models who are almost always white—a fact that did not escape the critics in Paris—whom he refers to in interviews as “girls and boys,” never as men and women. Youth, he said recently, “is gracefulness, freedom of speech, and recklessness.”

Slimane’s trademark style, which he first brought to Dior Homme and then to Y.S.L., is heavy on black leather, latex-tight pants, glittery mini-dresses, and animal prints. He dressed one male model in the Celine show in a T-shirt that looked like a trapezoidal disco ball, paired with ultra-high-waisted black leather chinos (like Humphrey Bogart meets Klaus Nomi). He put some of the women in color (an emerald-green taffeta mini, a red sparkly party dress with bubble sleeves that looked ready for the Ice Capades), but most of them wore black, with short hemlines and calf-length motorcycle boots. These clothes seem like they should come with a pack of cigarettes and an Adderall; the luxury he is selling is not focus or easy polish but the luxury to misbehave, to fall apart, to stay up too late and party too hard, and let someone else pick up the pieces. This, too, is a seductive promise. And it has been a profitable one—by his third year at Saint Laurent, Slimane had doubled the company’s profits.

It is not unusual for a designer to alter, or even to completely change, the DNA of a fashion house when he seizes control; when a young Yves Saint-Laurent took over Dior, in 1957, he loosened the seams, converting the brand’s nipped waists and hard wool into more billowy, voluminous silhouettes. Alessandro Michele’s new Gucci is a jewel-toned rainbow explosion that channels some of the house’s original Florentine hauteur while infusing it with a fresh wax of waggishness. Even Phoebe Philo’s tenure at Celine changed the house profoundly: she retained the sportswear focus of the brand (which began as a children’s shoemaker, in 1945) but added a rigor and richness that wasn’t there before. It is a creative director’s job to remake and remix a label, to dust off whatever isn’t working and tilt public perception.

Still, the critical responses to Slimane’s Celine début have been vicious. Vanessa Friedman, at the Times, wrote that the show was a boring retread of things that Slimane has done before. Many blamed Slimane’s single-minded, unyielding vision on the fact that he was a man—the Hollywood Reporter went so far as to ask if he was “the Donald Trump of fashion.” On Twitter, the fashion critic Max Lakin noted that “it’s hard not to see the parallels between hedi and the GOP: men adamant in giving power to other men; a wholesale rejection of the opinions of female constituents.” I am reluctant to indulge such facile comparisons. But I can’t help but feel that some of Celine’s vital energy has been lost along with the accent mark. Looking at Slimane’s parade of inky clothing, like an oil spill on the runway, left me feeling jittery, like I was coming down from a long night. I’ll miss Philo’s structured oxfords and dishevelled chignons—the aspirational look, however unaffordable for the layperson, of a woman who has shown up to do the work.