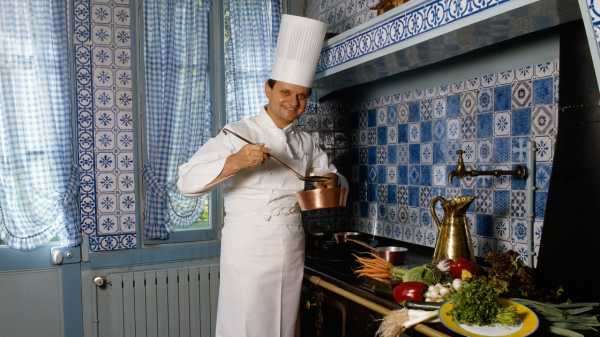 The French chef Joël Robuchon, who died on Monday, at the too-young age of seventy-three, may have been that tricky thing: a hinge figure in history. His style as a cook and restaurateur—though it eventually came into contact with the newer edges of things, drawing even from the molecular-gastronomy revolution—was rooted unashamedly in the classic techniques of the French restaurant kitchen. The critic and cookbook author Patricia Wells, who certainly has the stature to say so, called him the “artist who most influenced the 20th-century world of cuisine,” and compared him, a little indiscriminately, to Chopin and Picasso. But those artists were unmistakable innovators, and Robuchon, as Le Monde rightly put it, was “leery of stylish exercises and fashionable effects.” He remained with culinary tradition even as he changed it.

Reading through his masterpiece cookbook, “Tout Robuchon,” published in America as “The Complete Robuchon,” one finds the prefatory pages devoted to all of the classic infinitive verbs of French cooking: frapper, tamiser, mijoter, epluchér. Then there is a chapter, immediately after, about stocks, and turning stocks into sauces—the foundational idea, and originality, of great French cooking. The fine distinctions among different verbs and bone broths—like the even finer distinctions made, later in the book, between every possible action of a chef’s knife—were the summary knowledge not just of a lifetime but of some three centuries of French culinary craft. There was something noble and summary in his book, as in his career.

At the same time, he was, with the great Lyon chef Paul Bocuse, but on an even larger scale, one of the first planetary cooks—a figure not tied down to any one stove or house but seemingly everywhere at once. He opened restaurants in Las Vegas and Tokyo and London and Hong Kong. Much of the latter part of his cooking life was devoted to his Atelier restaurant chain (an insulting word, but no other comes to mind), where exquisite small plates were served at a counter, almost as if an old New York City Chock Full o’ Nuts had died and gone to heaven. I will confess that the spirit of the Ateliers never spoke to this diner, since they were, in their arrangement—you had to swivel your head to speak to your companion—more directed toward the food than toward the exchanges between those who ate it. But, even if one wished for a table and a candle and a face to face, no one could deny the excellence of what was on the plate.

The global presence of Robuchon’s cooking, what has been called “the planetary turn,” came to be a paradoxical one. French chefs went out to colonize the world—and soon found the world colonizing, or even abandoning, French cuisine. More and more, tastes and styles now run to the bright collisions of flavor and the speedy forms of street food that lie all over the globe, outside of the well-trimmed garden of the classic French kitchen. (Anthony Bourdain, so sadly gone, was an exemplar of that more original form of the planetary turn.)

But, if anyone continued to make the case for classicism, it was Robuchon. It is touching, and typical, that, of all his dishes, his most famous—the one that will be recalled in every instant obituary—was his recipe for purée de pommes de terre. Mashed potatoes. One would have thought that this dish was in no need of improvement, and resistant to any transformation. You take a potato; you boil it; you mash it; you add butter and hot cream or milk. Everyone likes it, except the dieters, who are offended by its very existence. But Robuchon took this simple idea and refined and enriched and ennobled it. In his recipe in “Tout Robuchon,” he has you boil Ratte potatoes in their jackets, and peel them only after. (This is a hand-toasting exercise, as any home cook will know, made for either pros with no finger pads left or stagiaires with no choice.) Next, the peeled potatoes go into a handheld ricer—“or a food mill fitted with its finest disk”—and then onto the stove to be dried out, the mixture turned “vigorously with a spatula for five minutes.” (This is one of those directions in classic French recipes—like beating egg whites by hand to firm peaks—that entails more wrist action than one had quite planned on.) Then you incorporate the butter, which must be chilled, never room temperature—a whole half pound of it, preferably demi-sel, to two pounds of potatoes, and only after “stirring it energetically” (more wrist work) do you pour in two cups of hot milk. (Many believe that the amount of butter had been bowdlerized by Robuchon for readers, and that the actual amount served in his restaurant potatoes was far more.)

A million small risks—demons of graininess, gluiness, sheer goopiness, and dull starchiness—attend you each time you attempt the recipe. But the result, which is a little like going to a butter spa, is wonderful, a powerful reminder of the refinement contained within the most classic formulas. Its novelty lies not in the originality of its conception but in the extravagance of its traditionalism, and the perfection of its details. Classical artists are rare these days, in any field; when one passes, the world’s store of strong form diminishes, and our plates seem pale.

Watching the Best Music Videos Nominated for the Grammys This Year...