Home Culture What Life in New York City Looks Like with a Great Dane... 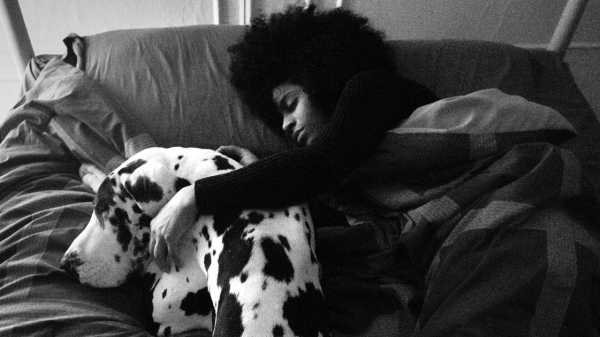 One day nearly a decade ago, when she was nineteen years old and living with her parents in Flatbush, Brooklyn, Kristina Justice fell in love with an abandoned Great Dane at a veterinary clinic in Sheepshead Bay. The dog was speckled with black-and-white harlequin spots, making it look like a supersize Dalmatian. Justice was training to become a veterinary technician at the time, and, although she interacted with dozens of dogs every day, she couldn’t shake the idea that this dog, with its gangly, galumphing, slobbery sweetness, should be the one that she brought home. That same night, she begged her mother and father to consider cohabitating with a hundred and forty pounds of purebred pooch, but they told her that they couldn’t possibly handle a new tenant that could reach above the refrigerator on its hind legs. In the end, it didn’t matter—when Justice arrived at the clinic the next morning, the Great Dane was gone, having been adopted overnight by another big-dog fanatic. At that moment, “I promised myself that, when I was old enough, I was going to own a Great Dane,” Justice told me recently. “I was going to do it even if I lived in a studio apartment.” 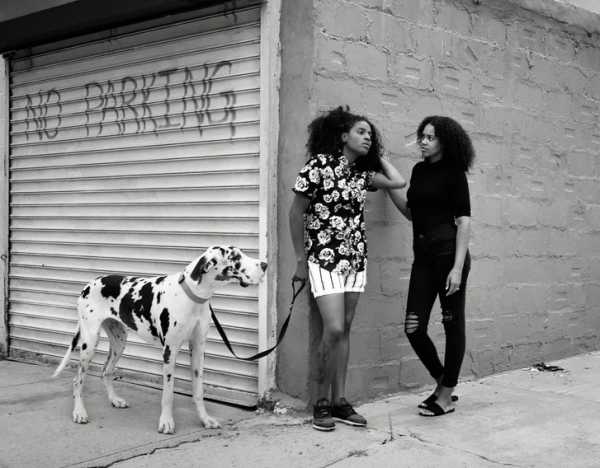 These days, Justice lives in the Brooklyn neighborhood of Flatlands—in a one-bedroom, not a studio—and she has fulfilled her promise. She shares her small space with a three-year-old harlequin Great Dane named Hendrix (after Jimi), plus three other roommates: a ten-year-old pit bull, a hairless sphynx cat, and Justice’s fiancée, a twenty-four-year-old nonprofit worker named Talisa Smith. When Justice and Smith began dating, Hendrix, who came from a breeder in Pennsylvania, was just five months old and sixty-five pounds. Smith claimed to be a “dog person,” noting that she had grown up with a beloved cocker spaniel. Still, Justice said with a laugh, neither of them really knew what to expect. 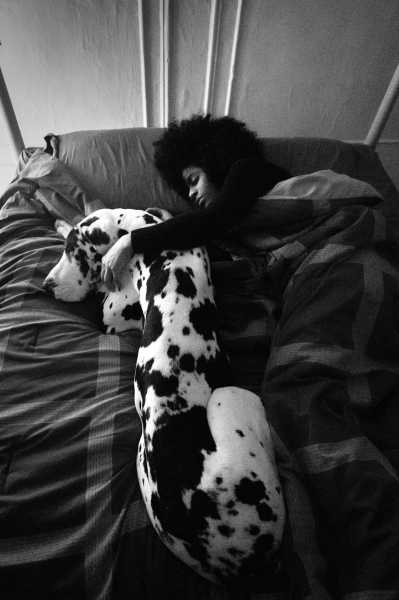 The Great Dane, originally bred in Germany to hunt wild boars and small bears, is a famously gentle breed. The dogs’ life spans are substantially shorter than those of smaller breeds—around eight years. It is nevertheless an endearing kind of insanity to want to own one in New York City, where, according to a recent study, the average apartment is under nine hundred square feet. Justice bought a Jeep Wrangler to transport Hendrix from place to place. (They occasionally take the subway, but dogs as gargantuan as Danes are effectively prohibited by the M.T.A., which requires owners to transport their pooches inside a bag.) At home, “the apartment is really Hendrix’s apartment,” Justice said. “She sleeps in our bed, and she takes up the whole thing. We kind of just have to position ourselves around and on top of her to make it work.” During waking hours, “she does this thing we call ‘the zoomies,’ where she spins around in circles without getting dizzy, and she can knock a lot of stuff over that way,” Justice said. Plenty of other New Yorkers apparently consider this a viable arrangement. Every Sunday, a group of Great Dane owners meet up on Central Park’s Great Lawn at 7 A.M. and spend two hours letting their noble behemoths romp around. Sometimes as many as twenty dogs show up at a time. 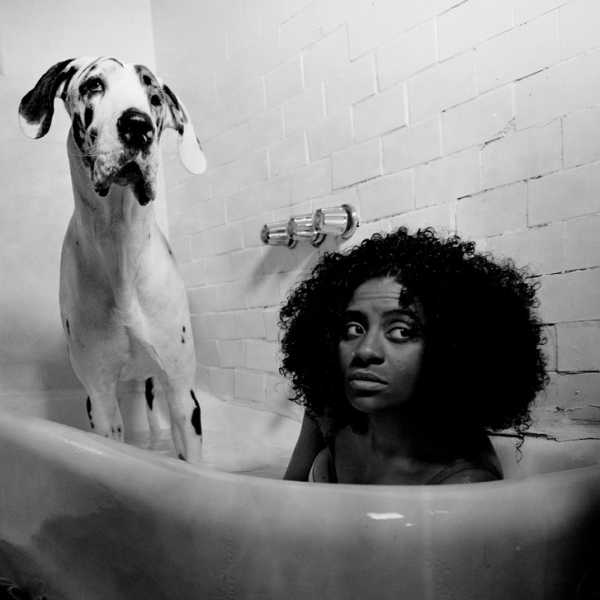 It was at one of these gatherings, last year, that the twenty-two-year-old Israeli photographer Amit Elkayam first met Hendrix. After a stint in the Israeli Army, where he was a photojournalist, Elkayam had moved to New York to study at the International Center of Photography. He had become fascinated by the cramped living conditions in the city compared with what he was used to in his village in Israel, and had begun following Great Dane owners on Instagram and Facebook and, eventually, seeking them out in person. He is allergic to some dogs, but he decided to subsist on Benadryl in order to capture Hendrix and her humans several times over the course of a year. 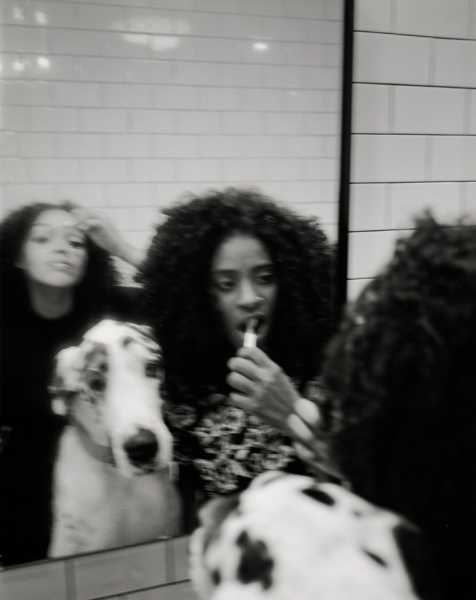 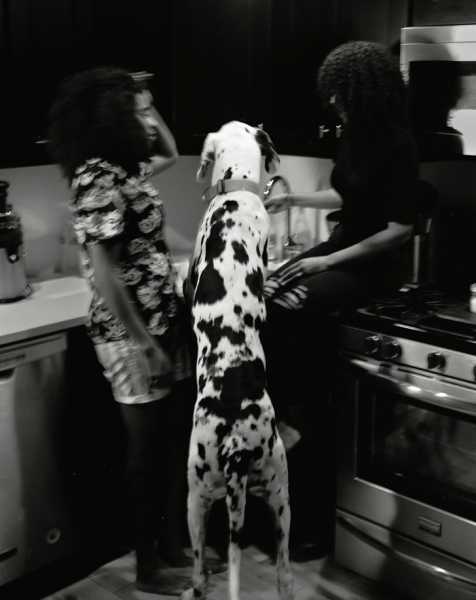 In Elkayam’s series “Big Dog in a Big City,” Hendrix takes on an almost human quality, as if she were simply a third member of Justice and Smith’s domestic partnership, gathering to blow out candles on a birthday cake or primping for a night out. We see Hendrix bathing with Justice (who has a sprawling tattoo of her two dogs on her calf) and staring in a mirror as Justice applies lipstick and Smith plucks her eyebrows. It is difficult to walk down the street in Manhattan with a dog and not be stopped, but it is nearly impossible when you are walking a hulking, dappled ham like Hendrix. “She’s a celebrity,” Justice told me. Strangers call out to the dog by name. The neighborhood kids call her Moocow. After seeing Hendrix on Instagram—she has her own account, with more than a thousand followers—the fashion designer Cynthia Rowley decided to feature the dog in her fall, 2018, advertising campaign, which just appeared in Vogue. Justice said that Hendrix seems to have a natural knack for modelling. “She craves the attention,” she told me. “When the camera flashes, she just goes there.” 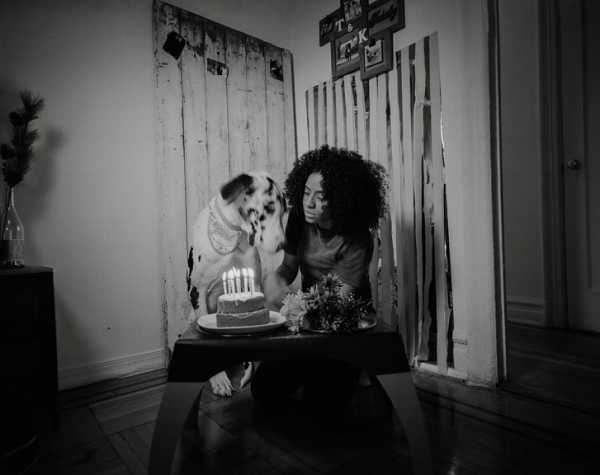 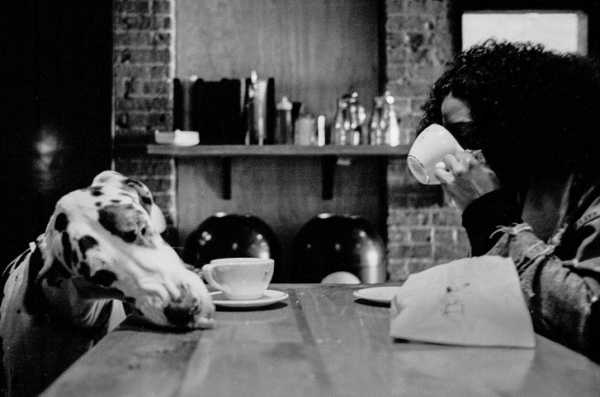 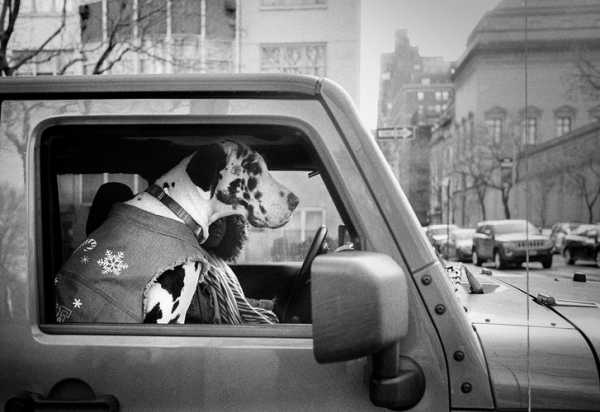 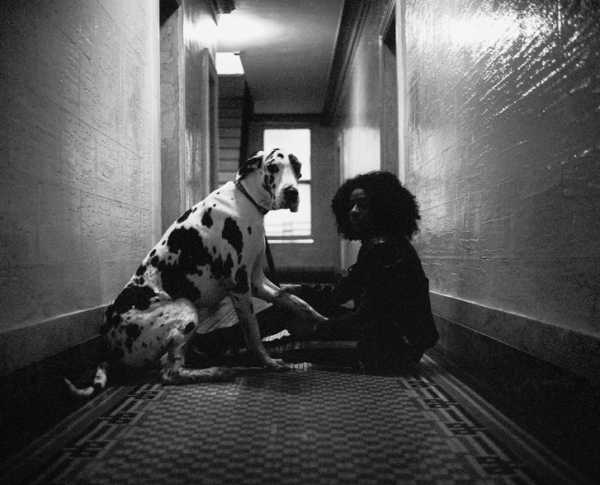 ‘We Have Gaps to Fill’: Starliner Manager Admits to Wrongfully Testing...