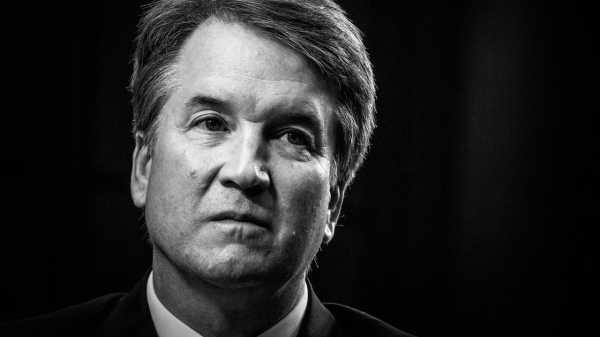 Christine Blasey Ford requested anonymity when she first wrote a letter to her congressional representative Anna Eshoo, and, later, to Senator Dianne Feinstein, of California, describing an incident at a party when she was in high school. In the letter, she claims that the Supreme Court nominee Brett Kavanaugh, at the time an intoxicated seventeen-year-old, sexually assaulted her. Ford claims that Kavanaugh and another boy, Mark Judge, pushed her into a bedroom, where Kavanaugh, while Judge laughed “maniacally,” forced her onto a bed, straddled her, attempted to remove her clothes, and covered her mouth with his hand when she screamed. Her story is strikingly similar to many other stories that have emerged amid the #MeToo movement’s frank accounting of sexual assaults, containing, as it does, alcohol, a party, physical force, and even an element of dark slapstick: Ford says that she was able to escape because Judge drunkenly lunged on top of them, causing all three teen-agers to tumble off the bed. After parts of Ford’s story became public last week, Kavanaugh denied the allegations in a statement. On Monday, in a new statement, he said, “This is a completely false allegation.” (Through his lawyer, Judge said, “I have no memory of this alleged incident.”)

By her own account, published on Sunday in the Washington Post, Ford had struggled with the question of whether to come forward with her story ever since Kavanaugh secured the Supreme Court nomination, in July. Senator Feinstein has said that she withheld the letter from colleagues on the Senate Judiciary Committee out of concern for Ford’s anonymity, before eventually handing it over to the F.B.I. In the end, Ford decided to come forward after reporters began showing up at her house and calling her colleagues to ask for comment. She perhaps feared that her name would end up online sooner or later. She could either tell her own story or have it told by someone else.

We have seen in recent days that Ford had good reason to be leery of coming forward. Almost as soon as her name was made public, her lawyer said, she began receiving threats. She was impersonated online and was subjected to cruel, taunting messages from strangers. “From what I’ve heard you have 6 months to live, you disgusting slime,” one message reportedly said. Along with her children, she has had to flee her home and hire private security. She is now essentially in hiding.

Republican leaders, meanwhile, have been careful not to disparage or insult Ford outright. Several have said that she deserves to have her voice heard; Kellyanne Conway said that Ford “should not be insulted”; Senator Jeff Flake, of Arizona, said that he would not be comfortable voting on the Kavanaugh nomination until he heard Ford’s testimony. Even President Trump, quick as he is to launch peevish insults, has so far refrained from attacking her directly. This may be one qualitative difference that the #MeToo movement has wrought: it is no longer acceptable for politicians, particularly male politicians, to dismiss an accuser as a “scorned woman,” or accusations as a “fantasy,” as they did when Anita Hill came forward, in 1991, with sexual-assault allegations against Clarence Thomas. It is now understood that a woman who speaks out about assault can demand at least an opportunity to tell her story, and that those who will ridicule or demean her for doing so can expect to be challenged.

This is not to say that Republicans have suddenly developed a solemn awareness of the significance of sexual-assault allegations. Some on the right have written off the alleged Kavanaugh incident as “horseplay,” or “drunk teen-agers playing seven minutes in heaven.” But others have engaged in more subtle attempts to undermine Ford’s account. After a phone call with Kavanaugh, for instance, Senator Orrin Hatch, of Utah—who once characterized Anita Hill as “too slick, too contrived”—said of Ford, “I think she’s mistaken something.” He later speculated that she is “mixed up” in her memory of the assault; it must have been committed by someone else. Before Ford’s name even became public, Republican lawmakers had produced a letter signed by sixty-five women who said that they knew Kavanaugh in high school, and had not heard of or observed any sexually abusive behavior by him at the time—a defense based on the dubious presumption that, because they did not know about it, the assault could not have happened. The approach has been not to attack Ford so much as to praise Kavanaugh, to assert that he has, in the words of President Trump, an “unblemished record.” In this careful telling, Kavanaugh is honorable, and Ford merely confused.

For her part, Ford seems to have anticipated much of this, and taken clear-eyed steps to strengthen her credibility as best she can. Before she even made the decision to reveal her identity, she submitted to a polygraph test, administered by a former F.B.I. agent, on the topic of the alleged assault. She passed. She also had notes from her therapists—Ford, a psychologist, has been in therapy both alone and with her husband—released to the Post, to verify that she had discussed the assault, and its lasting emotional trauma, as early as 2012. (The therapist’s notes refer to Ford’s accusers as students who went on to become “highly respected and high-ranking members of society in Washington”; Ford’s husband confirmed that she discussed Kavanaugh by name.) She has also been backed up by an outpouring of public support, from both strangers and members of the Senate. Senator Mazie Hirono, of Hawaii, responded to Ford’s account by issuing a demand for American men to “Shut up and step up” to counter a culture of sexual abuse.

Amid all of this, the Senate, nearly thirty years after Anita Hill’s testimony, still lacks proper procedures to deal with accusations against a nominee. Republicans, wanting to get the matter over with as quickly as possible, had arranged a hearing for this coming Monday, with testimonies only from Judge Kavanaugh and Ford. Ford, in turn, said that she did not want to testify until the F.B.I. had investigated the incident—especially, her lawyers said in a statement, not before Senators “who appear to have made up their minds that she is ‘mistaken’ and ‘mixed up.’ ” In an op-ed in the Times on Monday, Anita Hill warned against rushing the proceedings. “Doing so would not only signal that sexual assault accusations are not important,” she wrote. “Simply put, a week’s preparation is not enough time for meaningful inquiry into very serious charges.” The Judiciary Committee signalled that, if Ford did not appear on Monday, they would proceed to a vote without her testimony. “Republicans extended a hand in good faith,” Senator Bob Corker, of Tennessee, said. (As of Thursday, according to Ford’s lawyer, she is now willing to appear next week if certain undisclosed terms are met.)

The ordeal thus far reflects the strained logic of defending a man accused of sexual assault in the #MeToo era. Now the approach is gentler and more self-aware, less vilifying and more patronizing. But, by suggesting that Ford must be mistaken about who assaulted her, Republican lawmakers are making the same claim against her that they made against Hill, altered in style but not in substance: that they know more about a woman’s experience than she does.

We don’t know yet what will happen to Christine Blasey Ford—whether, if she does decide to testify, she will be afforded more respect by Republicans during a hearing than Hill was, or whether she will be talked down to with the same contempt. And we do not know how Republicans will reconcile the fact that Kavanaugh faces these allegations in a charged political climate where many of them would like to appoint him to the Supreme Court regardless, where his decisions will have profound reverberations in the lives of women and all Americans. For her part, Ford seems to have made her own calculations with weariness, resignation, and limited hope. In her interview with the Washington Post, she explained why she had initially declined to come forward: “Why suffer through the annihilation if it’s not going to matter?”

I Spy: Google Chrome Caught Discreetly Scanning All Files on Your...

‘I was in trouble’: Nadal digs deep to clinch dramatic victory...