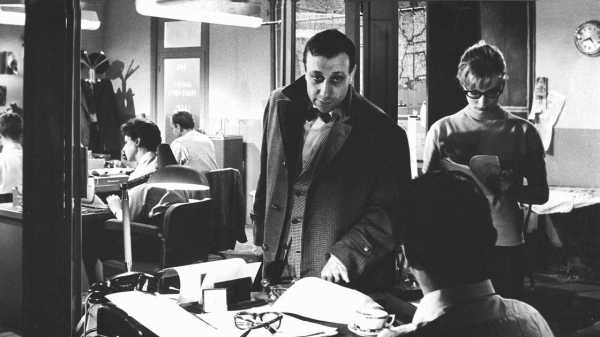 “Nothing political,” a French journalist tells his editor about the strange fate of France’s delegate to the United Nations. But, in the snappy and streetwise 1959 mystery “Two Men in Manhattan,” directed by Jean-Pierre Melville (whose films are being spotlighted this week at FilmStruck), everything turns out to be political, and in surprising, historically revealing ways. Melville, a seminal French independent filmmaker who owned the studio where he made many of his films, was also an Americanophile (born Jean-Pierre Grumbach, he chose his nom de guerre in homage to the author) who went to New York in late 1958 to film his own version of a B-movie film noir. The director—who bore, at the time, a passing resemblance to the crime-drama star George Raft—plays the Agence France-Presse journalist Moreau, who works from a Rockefeller Center office and is assigned to track down a diplomat, Fèvre-Berthier, who has gone missing. To aid in his search, Moreau enlists a friend, a cynical alcoholic paparazzo named Delmas (Pierre Grasset) who knows the seamy side of New York night life. Following the rule of cherchez la femme, the two men seek out Fèvre-Berthier’s various mistresses in a theatre, a burlesque house, a recording studio, and a night club, in quest of clues. Melville films the New York cityscapes with an ardent curiosity that makes “Two Men in Manhattan” a primary source of urban iconography; along with his varied and mood-steeped nocturnal images of Times Square and various skylines, he sets the action in such out-of-the-way and rarely filmed locations as Ridgewood and Pike Slip. But the drama, for all its sleazy flair, unfolds a politically inspired and rigorously principled conflict pitting journalistic candor against what one character calls “the prestige of France.” (Guess which wins.) The movie’s backstory involves the French Resistance during the Second World War; Melville was a Resistance fighter and a committed Gaullist whose idea of the prestige of France was linked with the destiny of the general—who, months before the filming, became the country’s President. In Moreau’s climactic chase scene through New York, featuring the diplomat’s intrepid daughter (Christiane Eudes), Melville enshrines a social and historical ideal more clearly and boldly than most more expressly political filmmakers. (It wouldn’t be until 1972, in his last film, “Un Flic,” a.k.a. “Dirty Money,” made after de Gaulle’s death, that Melville would take a jaundiced view of French national politics.)

Stream “Two Men in Manhattan” on FilmStruck, Kanopy, Amazon, and other services.