Home Culture What to Stream This Weekend: “Burning Cane” | 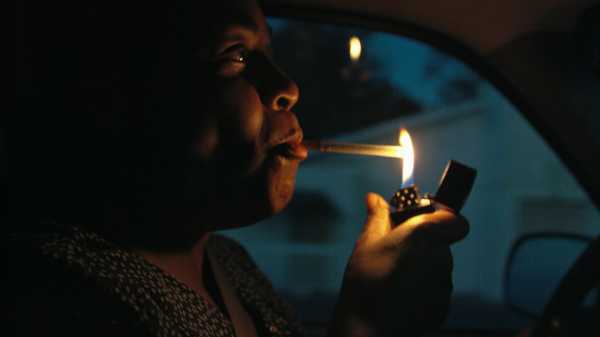 The emotional maturity that the writer, director, and cinematographer Phillip Youmans displays in his first feature, “Burning Cane” (in limited release and on Netflix), which he made two years ago, at the age of seventeen, is astounding. His pictorial, tonal, and dramatic sensibility is original and distinctive. But what’s all the more impressive, and unusual, is his expression, through images and sounds, of an intense, anguished, deeply personal response to the events of his drama—and to the circumstances of life at large which they exemplify.

“Burning Cane” is set in rural Louisiana and is centered on an African-American community there, and, in particular, on a woman named Helen (Karen Kaia Livers), who, perched between middle age and old age, lives alone and carries heavy burdens of memory and responsibility. Because of a leg injury she suffered years ago that never healed properly, she walks with a limp; her one constant companion, her dog, is ailing; her family life is a torment. Her late husband died of AIDS, and she derides him as a “ho.” One of her two sons was killed in military service; her surviving son, Daniel (Dominique McClellan), is a heavy drinker who has lost his job because of alcohol-related misconduct. Daniel’s wife, Sherry (Emyri Crutchfield), is increasingly losing patience with him. Despite his drinking, he cares lovingly for their young son, Jeremiah (Braelyn Kelly). Daniel’s pent-up frustration eventually explodes in a violent attack on Sherry, and the rest of the film involves the family’s effort to confront him and to endure what is, in effect, a new and unlivable world, blown suddenly out of whack.

Youmans films his characters’ landscape with an eye that’s both rapturous and tremulous, frankly confrontational and tensely terrified. His attention to light—his expansive compositions that fill with celestial light, and oblique ones that glint with artificial lighting—suggests a conflict that finds its most conspicuous embodiment in the church, where much of the action takes place. There, the Rev. Joseph Tillman (Wendell Pierce) leads his congregation with vigorous sermons against greed and other temptations, and exhorts his parishioners to love and charity. Tillman—a widower, who, in his bereavement, drinks heavily—confronts a crisis of faith, one that’s directed bitterly outward, at his congregants and the liberalizing currents of the times. Yet, he, too, has something of a secret—regarding violence toward his late wife—which emerges, fleetingly, in a moment of heedless abandon.

The world that Youmans sees is poisoned by the violence of men, a violence that emerges volcanically from a doubly ravaged world—spiritually ravaged by the familiar realms of evil impulses and historically ravaged by memories of the colossal, but nearly ineffable, power of slavery and Jim Crow. In one scene, Helen gets a call from the sheriff’s office, from a woman whose family Helen’s mother used to work for. The caller, named Mary, informs Helen that she found the pastor drunk and asleep in his car, which is parked on a road “nearby the slave quarters.” The line lands like a stifled blow. The movie offers a compendious cultural history to evoke the community’s complex legacy, too, as in the copious performances of gospel music in church—a soundtrack clip of Mary Lou Williams’s “Black Christ of the Andes,” a recording from 1936 by the short-lived blues visionary Robert Johnson. There’s also a double-edged view of popular culture in a sardonic clip from “The Jungle Book,” which Jeremiah is watching, and with his own efforts at drawing comics, his principal hobby.

Youmans films the way an artist draws: not only is there a direct dramatic power to what he sees and a stylistic imprint to the way that he sees it; there’s also the presence of the hand, the sense of his own immediate connection to what’s appearing on the screen. His view of torments borne and of violence threatening to break out, of a buried past and a volatile yet static present, emerges in inspired compositions of partial views and lurking shadows. His oblique images, featuring low-angle shots and action seen through a sliver of a windowpane or illuminated by a bare lightbulb in the distance, are far more than an aesthetic choice. These images convey the sense of a world observed in horror, as if his fingers were partly covering the camera’s eye to shield viewers—and, above all, to shield himself—from the agony of seeing unbearable realities plainly and completely. That fragmented and terrifying vision is nonetheless endowed with an inescapable and compelling aura of beauty, an exalted inkling of historical, spiritual, and personal progress.

Jamie Vardy and Gary Cahill step down from England duty

Why some people don’t tip their Uber drivers