Home Culture What to Stream This Weekend: “Fear Strikes Out,” a 1957 Classic About... 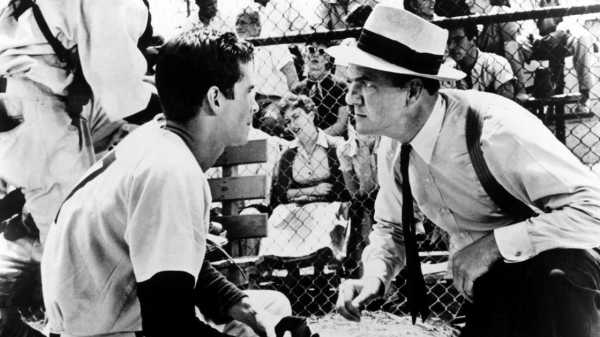 With baseball season having got off to a successful start—the Mets and the Yankees both won their opening-day games—it’s worth revisiting a classic that dramatizes one ballplayer’s painful path to success, “Fear Strikes Out,” from 1957. It’s based on the real-life story of Jimmy Piersall, an all-star outfielder for the Boston Red Sox in the fifties (and, then, for other teams, including, briefly, the Mets), who faced bipolar disorder—and whose career was nearly derailed by it.

At the beginning of the movie, directed by Robert Mulligan, young Jimmy (Peter J. Votrian) is seen obsessively practicing his hook slide in a small, fenced-in yard outside the family’s modest house, in Connecticut. The boy is being groomed for baseball stardom by his father, John (Karl Malden), a factory worker with his own thwarted baseball dreams. When Jimmy (played by Anthony Perkins, who was twenty-four at the time of filming) is in high school, his father becomes a classic stage parent, micromanaging his life and his on-field performance; Jimmy’s emotional torment under the intense pressure is already apparent. By the time that he reaches the Red Sox, his play is affected by mental illness; he also becomes disruptive to the team and, after a particularly violent episode, is interned in a mental hospital. (It’s not giving much away to say, as the title suggests, that he makes a successful return to the major leagues, which, at the time of the movie’s release, was already widely publicized—“Fear Strikes Out” is based on Piersall’s 1955 memoir of the same title—though the movie doesn’t soft-pedal the difficulties of his struggle to return.)

“Fear Strikes Out” was Mulligan’s first feature (he’s best known for directing “To Kill a Mockingbird”), and in it he reflects an intense sensitivity, a romanticism of vulnerability and innocence that flashes a political edge. In an era stereotyped as one of consumerist conformism, when teens fleeing adult responsibilities were being portrayed as hoodlums and juvenile delinquents, some Hollywood directors (such as Nicholas Ray and Vincente Minnelli) offered views of overburdened and misunderstood children and teen-agers. “Fear Strikes Out” is a classic movie in that vein—and it’s shadowed by perhaps the definitive classic of the genre, Ray’s “Rebel Without a Cause.” (There’s an odd but unmistakable “Rebel” connection in “Fear,” when Jimmy’s mother calls him Jimbo, which is exactly what Jim Stark, the character played by James Dean in “Rebel,” is called.) The father in “Rebel” was too soft; the father in “Fear Strikes Out” is too hard; and, where, in Ray’s film, there’s an explicit Freudian touch of physical conflict between father and son, Mulligan’s film only hints at destructive desires—Jimmy blames his father’s bout of heart disease on himself. The movie may not have been entirely true to Piersall’s life; the player criticized it for attributing his mental illness to his father’s treatment of him. (Piersall’s mother was also mentally ill, which the movie only hints at.) But “Fear Strikes Back” was true to the times; it anticipated the generational crisis of the sixties, the destructive masculine politics of discipline, repression, and war.

Stream “Fear Strikes Out” on Amazon Prime, iTunes, and other services.