Home Culture What to Stream This Weekend: Zazie Beetz in “Sollers Point,” A Movie... 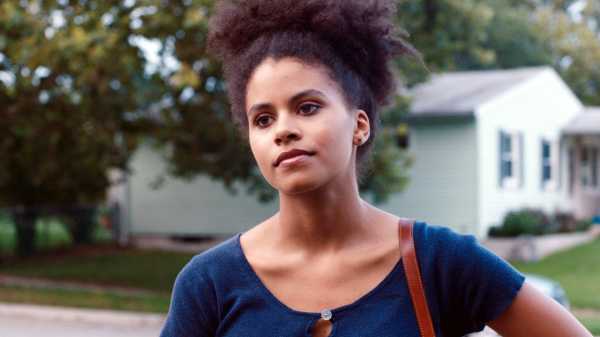 Steven Soderbergh’s new sports-business drama, “High Flying Bird,” gives the actress Zazie Beetz a finely crafted role, of an assistant seeking opportunities appropriate for her talents, to infuse with her poised and forthright energies. With another such performance, she expands the fabric of one of the best movies of 2018—one that, though it didn’t get a release to match its merits, is now widely available online: Matt Porterfield’s “Sollers Point.” It is about a young man named Keith (McCaul Lombardi) who’s released from prison to a house that he shares with his father (Jim Belushi) in the Baltimore neighborhood of Dundalk (Sollers Point Road runs through it). Beetz plays Courtney, Keith’s ex, who has broken up with him but is still a part of his life—yet won’t allow him to disrupt her life or to take advantage of her affections.

Porterfield’s drama is, in effect, about the prison outside of prison, which is to say, the prison within—the one that the formerly incarcerated carry around with them long after they’ve been released. That burdensome state of mind has social correlates in Keith’s community, where many of his neighbors and most of his friends, including Courtney, are black people. In prison, Keith was protected by a white-supremacist gang, and, upon his release, some of its members come calling to bring him back into their fold. Courtney wants to help Keith, but she doesn’t want to get drawn into the whirlwind of violence around him. Porterfield sketches lightly but deeply, and Beetz forcefully incarnates the fragility and vulnerability of a responsible life. “Sollers Point” is about a constant fear of slipping through the cracks and getting caught in the hell of the system.

Porterfield, a determinedly local filmmaker, rose to prominence more than a decade ago with “Hamilton,” which is also the name of the Baltimore neighborhood where it takes place. His aesthetic of richly textured firsthand experience meshes with that of others in his generation of American independent filmmakers who have revolutionized cinema with do-it-yourself and community-based methods and a new style of performance to match. Beetz came to the fore in episodes of Joe Swanberg’s Netflix series, “Easy”; in his earlier features, Swanberg also cast such actors as Greta Gerwig and Kate Lyn Sheil in their first starring roles. Paradoxically, even as many of the actors who’ve emerged from these independent-cinema circles make their mark on the mainstream and take roles in Hollywood productions, their mode of performance—and the movies that they’ve made and continue to make on much smaller budgets—marks out all the more clearly the ever-widening gap between the movies being made in neighborhoods and the ones being made on studio sets.

Stream “Sollers Point” on Amazon Prime, Kanopy, and other services.

Chasing Captain America: why superhumans may not be that far away

A Surprise Ending for Westsider Books |

Not by Gazprom Alone? How Germany’s Embracing LNG in a Bid...