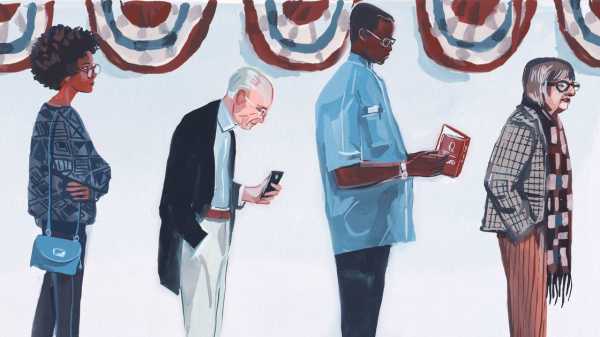 Back in 1992, I published a piece about voting at the Y on Lexington Avenue. “At the Y, nothing has changed,” I wrote:

Around the room, the machines’ shabby curtains snap open and bang shut; the vestal poll-watchers bend low over their thick volumes; and once again I have forgotten the number of my assembly district. Redirected, I sign my name above an amazing column of perfect prior replicas, in various inks: my straight A’s in civics. I get in line and, for this once, don’t mind its length or slowness. Inside at last, I flip the pleasing levers and then check my “X”s one more time; it’s all done so quickly that I linger a moment longer. . . . Then I grab the lever, record myself with a manly fling, and walk out, shriven, to go to work.

I went on to say that I’d fallen “a long way from the hot certainties of my twenties and thirties, when I would argue politics with my friends and family by the hour and the day and the night,” and fired off “burning letters to my congressman and dialled Western Union before bedtime with still another telegram to the White House. No more. I have no wish to sort out here what happened to me, what happened to us all, when our politics went onto the tube, for we know that story by heart. We are consumers of politics now, and hardly participants at all.”

Editing this piece now, before your eyes, I’d say that I like and stand behind my paean to the voting machine, whose absence I mourn each November—the pure and pearl-like oddity that so well matched the strangeness and beauty of voting. On the other hand, I could do without my hurried complaints about the massive shift of national politics from newspapers and radio onto television (the “tube,” as we called it then).

What I need to add here, in 2018, by contrast, is my reconversion from the distanced and gentlemanly 1992 Roger to something akin to the argumentative and impassioned younger me, which began with the arrival of Donald Trump in our politics and our daily lives. In a New Yorker piece posted the week before the 2016 election, I wrote that my first Presidential vote was for Franklin Delano Roosevelt, in 1944, when I was a young Air Force sergeant stationed in the Central Pacific. I went on to say that, seventy-two years later, defeating Trump made that immediate election the most important of my life. Alarmed as I was, I had no idea, of course, of the depths of the disaster that would befall us, taking away our leadership and moral standing in the world.

I am ninety-eight now, legally blind, and a pain in the ass to all my friends and much of my family with my constant rantings about the Trump debacle—his floods of lies, his racism, his abandonment of vital connections to ancient allies and critically urgent world concerns, his relentless attacks on the media, and, just lately, his arrant fearmongering about the agonizingly slow approach of a fading column of frightened Central American refugees. The not-to-mention list takes us to his scorn for the poor everywhere, his dismantling contempt for the F.B.I. and the Justice Department, and his broad ignorance and overriding failure of human response. A Democratic victory in this midterm election, in the House, at the least, will put a halt to a lot of this and prevent something much worse.

Countless friends of mine have been engaged this year in political action, but, at my age, I’m not quite up to making phone calls or ringing doorbells. But I can still vote, and I ended that 1992 piece by saying how the morning after Election Day I’d search out, in the Times, the totals in the Presidential balloting, and, “over to the right in my candidate’s column, count the millions of votes there, down to the very last number. ‘That’s me!’ ” I would whisper, “and, at the moment, perhaps feel once again the absurd conviction that that final number, the starboard digit, is something—go figure—I would still die for, if anyone cared.”

What I said I would die for I now want to live for. The quarter-century-plus since George H. W. Bush lost that election to Bill Clinton has brought a near-total change to our everyday world. Unendable wars, desperate refugee populations, a crashing climate, and a sickening flow of gun murders and massacres in schools, concert halls, churches, and temples are the abiding commonplace amid the buzz of social media, Obamacare, and #MeToo. What remains, still in place and now again before us, is voting.

What we can all do at this moment is vote—get up, brush our teeth, go to the polling place, and get in line. I was never in combat as a soldier, but now I am. Those of you who haven’t quite been getting to your polling place lately, who want better candidates or a clearer system of making yourself heard, or who just aren’t in the habit, need to get it done, this time around. If you stay home, count yourself among the hundreds of thousands now being disenfranchised by the relentless parade of restrictions that Republicans everywhere are imposing and enforcing. If you don’t vote, they have won, and you are a captive, one of their prizes.

When you do go to vote on Tuesday, take a friend, a nephew, a neighbor, or a partner, and be patient when in line. Just up ahead of you, the old guy in a sailing cap, leaning on his cane and accompanied by his wife, is me, again not minding the wait, and again enthralled by the moment and its meaning.

Plane Crash Kills 3 People, Including Child, in Goshute Valley in...