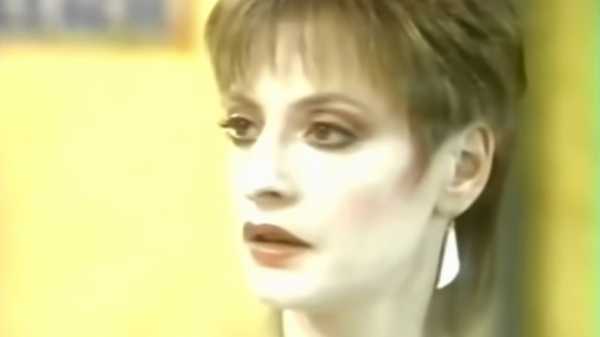 Several years ago, a friend of mine who is probably the world’s biggest Patti LuPone fan told me about a little-known project that LuPone did in 1984. It was the pilot for a series called “Hip Pocket Musicals,” which was pitched to PBS but never aired. Each episode would have been a different half-hour mini-musical with the same group of actors. The first one was called “Love Cycle: A Soap Operetta,” and it starred LuPone as a vengeful ghost who haunts a laundromat. I watched his bootleg copy, and it’s fair to say that I’ve been haunted by “Love Cycle” ever since.

It has everything you want in a ghost story. LuPone’s character, Rachel, has died in a tragic laundry accident and now dwells in a malfunctioning dryer. “In that dryer / burns the fire of Hell,” one character warns, in song. When someone uses it anyway, Rachel emerges to take revenge on her ex-husband and the woman he left her for. But, when the couple, who have broken up, arrive at the laundromat, the two women sing a ballad about forgiveness and letting go, and Rachel, finally at peace, ascends to the Great Beyond—but not before returning all the unmatched socks she’s been stealing from the machines. So that’s where they all went!

LuPone, at the time, was between her star turns in “Evita” and “Les Misérables.” But she isn’t the only notable player in “Love Cycle.” The cast includes Priscilla Lopez, from the original cast of “A Chorus Line”; Lonny Price, from “Merrily We Roll Along” and (also in 1984) “The Muppets Take Manhattan”; Walter Bobbie, who went on to direct the Broadway revival of “Chicago”; and Ellen Foley, who had duetted with Meat Loaf on “Paradise by the Dashboard Light.” It’s safe to say that none of them put “Love Cycle” on their résumés, but it’s one of those artistic misfires so outrageous and nonsensical that you can’t look away.

Before I go further, you should probably just watch the thing, because it defies description, and because someone put it on YouTube:

There’s so much to love about “Love Cycle”: The copious puns. The “Xanadu”-era special effects. LuPone’s hair style, the same punkish eighties mullet worn by the mom on “Webster.” The songs, which are actually pretty catchy. It’s hard to pick a favorite lyric, but I’m partial to this verse, sung by the cheating ex-husband in counterpoint to LuPone’s ghostly warbling:

Quarters in the slot.
Do I set this thing for cold or hot?
I keep thinking that there’s something I forgot. . . . The bleach!

Nevertheless, “Love Cycle” leaves a lot of questions unanswered, namely What?, How?, and Why? This Halloween, I decided to investigate. “Well, what do you want to know about it?” LuPone said by phone the other day, exploding into a conspiratorial cackle. She didn’t remember much about the plot. “For some reason, I’m haunting this laundromat, and I’m stealing everybody’s socks.” Another cackle, then a deadpan: “Yeah, this is a real piece of art.”

Let’s back up. “Hip Pocket Musicals” was devised by a trio of collaborators: the writer-producer David Misch and the songwriting team Bill Burnett and Peggy Black (now Sarlin). Burnett told me, “ ‘Saturday Night Live’ was fairly new then, and the concept of a repertory company of actors who were always in different roles and different sketches, like [John] Belushi—we thought it would be fun to do a series of musicals that way.” Misch, who had written for “Mork & Mindy,” had TV connections, so they pitched the idea to PBS and got money to make a pilot. At the time, the three creators were living together above a laundromat in Greenwich Village. Like the main characters, they were also in a love triangle. “Peggy and I had been high-school sweethearts, and then David and Peggy fell in love, so we changed horses,” Burnett recalled. “But we continued to be friends, and we lived together in that apartment, on Charles Street, so obviously we were touching on our own experience.” You might read LuPone’s character as an avatar of the jealousy that could have easily destroyed their friendship but didn’t. “I guess it was our projection of what we were proud we didn’t do,” Misch told me, “because that is the traditional way someone would react—with howls of fury and throwing-of-laundry vengeance.”

They held auditions. According to Misch, Kyra Sedgwick read for the ghost. Also, he recalled, the casting director, Donna Isaacson, had heard of “two really cool women who were singing in the East Village—one was named Madonna and the other was named Cyndi Lauper”—but she was unable to track them down. The episode was shot in a TV studio in Harlem, and, to make the most of their days, the cast left, by van, from Washington Square Park before sunrise. (LuPone, Misch recalled, was given a driver.) “Everybody was always extremely sleep-deprived,” Burnett said. On breaks, the exhausted actors would chant, “Pizza and beer! Pizza and beer!”

LuPone was excited to meet the director, Joshua White. “I used to hang out at the Fillmore East when I was a kid in the late sixties, and the Joshua Light Show was the psychedelic lights for all of the rock bands—and the director for this was Joshua White. I just imagined if I ever met the guy behind the Joshua Light Show, it was going to be some strung-out, long-haired hippie.” But she was disappointed: “He was this totally straight, kind of nerdy, yuppie guy.” Misch recalled that LuPone had some doubts before the shoot: “She said, ‘I just don’t understand the character. I have no idea why this woman says or does anything in the script.’ ” LuPone recalled, “I do remember at one point I had to shout, ‘One director, please!’ Because everybody had an opinion.” It’s possible that the set was haunted. LuPone got caught on the enchanted dryer, she said, and “I ripped the back of my leg open as I was all dressed in ghostly white.”

The creators envisioned a six-episode season, and they had two future episodes written. “One was ‘Doom’s Day in Court,’ about a horror-movie star like Bela Lugosi, who is being sued for palimony by his live-in lover, which at the time was a big issue,” Burnett said. “Then there was ‘I Love Lucia,’ which was an opera star who wants to stop being an opera star and take time off to have a baby, and her husband, who’s the director, didn’t want her to.” Alas, neither was filmed. The trio sent “Love Cycle” to PBS, Misch recalled, “and never heard from them again. That happens often in show business.”

For those involved, “Love Cycle” was a worthy idea that failed in execution. Asked if the project seemed promising or doomed, LuPone said, “It seemed promising when we did it, but it was doomed while we were doing it.” She added, “It was a really, really great idea, to have a series of half-hour musicals on TV. Great idea. The writing wasn’t—that particular one wasn’t up to it.” Burnett blamed the direction: “It had a kind of schizoid directorial concept behind it. Some of the scenes are almost naturalistic, and some are extremely theatrical, to the point that you can see that Walter Bobbie has fake mutton chops on.” Lonny Price, who hadn’t watched it in years, told me, “It’s like a drug trip. It’s out of its mind.” Then again, who’s to say what’s out of its mind? This was the decade, after all, that brought us “Cats.”

Asked if she believes in ghosts, LuPone said, without hesitation, “I totally believe that they exist. I totally believe that energy is around. Many of our Broadway houses are haunted.” At the Eugene O’Neill Theatre, where she starred in “Sweeney Todd: The Demon Barber of Fleet Street,” in 2005-2006, she said that she had a haunted dressing room. One night, she was standing at a bar she had set up in a closet and stepped backward onto her dresser’s foot. “I said, ‘Oh, Pat, I’m sorry!’ She said, ‘For what?’ I said, ‘I just stepped on your foot.’ And she said, ‘I’m over here’—she was in a different room.” Woo-oo!

Adam Byrne to miss rest of the season for Leinster

Why conservatives don’t care that Brett Kavanaugh is a liar