Home Culture Which Artists Should the Japanese Billionaire Yusaku Maezawa Invite to the Moon?... 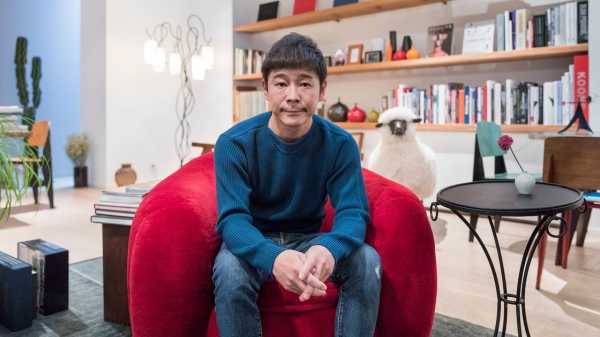 Until this week, Yusaku Maezawa was best known as the man who splurged on a painting by Jean-Michel Basquiat. At a press conference on Monday, he revealed his latest purchase: every passenger seat on a trip to the moon aboard SpaceX’s Big Falcon Rocket. The cost of the adventure wasn’t disclosed, but Elon Musk, SpaceX’s C.E.O., described it as “a very significant deposit.” (The total estimated cost for the week-long voyage, which could happen as early as 2023, is five billion dollars; it makes the Basquiat’s record-smashing price tag of a hundred and ten million dollars look like chump change.) Once again, the Japanese billionaire’s apparent passion for art is as newsworthy as his deep pockets: he plans to invite eight or so artists to join him. The announcement arrived with a hashtag, #DearMoon, and a melodramatic video that feels like an also-ran Super Bowl ad. When he made the announcement, Maezawa wondered out loud, “What if Picasso had gone to the moon? Or Andy Warhol or Michael Jackson or John Lennon?”

Warhol already had his moon shot, in 1969. The Moon Museum is a portable exhibition inscribed on a thumbnail-size ceramic wafer—a scant half-inch wide—made in collaboration with scientists at Bell Labs, who used tantalum-nitride film to reproduce line drawings by six artists, including John Chamberlain, Claes Oldenburg, Robert Rauschenberg, and Warhol. Oldenburg drew his trademark Mickey Mouse; Rauschenberg dashed off a straight line; Warhol contributed his initials, the “A” and “W” positioned to suggest a scrotum and penis. The tile was produced in an edition of forty. One is in the collection of the Museum of Modern Art. Another is rumored (with strong supporting evidence) to be on the surface of the moon, smuggled there by one of the astronauts on the Apollo 12 mission and left behind as cultural trophy. (If you have a spare hour and the inclination, you can watch an episode of PBS’s “History Detectives” on the subject.)

Maezawa has said that he would like his passengers to be drawn from a range of fields, including painting. So who should he invite? Damien Hirst would be the obvious choice, having already sent a dot painting to Mars, in 2003, which was designed to double as a calibration chart for scientists back on Earth. (The space probe on which the three-inch piece travelled, the Beagle 2, missed its landing date and was presumed lost in space, until 2015, when both it and the art were recovered.) A more interesting guest would be the Latvian-American photorealist Vija Celmins. The painter has been making sublime drawings of night skies and the lunar surface since the nineteen-sixties, and would bring a welcome phlegmatic nuance. If Maezawa would also consider a sculptor, the New Yorker Tom Sachs has been suiting up for the job for years, staging ambitious bricolage “space missions” using Home Depot materials. Or the Polish sculptor Aleksandra Mir could restage the ten-hour performance, from 1999, that helped launch her career, in which she planted an American flag on a mountain of sand and declared herself the “First Woman on the Moon.” More boldly, to pay homage to the space race of the Cold War, he might invite the husband-and-wife team of Ilya and Emilia Kabakov, former Soviet artists, now ensconced on the East End of Long Island, whose 1984 installation “The Man Who Flew Into Space from His Apartment” envisioned an impoverished dreamer catapulting himself beyond Earth’s atmosphere using nothing more than a slingshot.

The Moral Clarity of “Christopher Robin” |

Time to Take a Leap in Life? Big Cat Shows How...