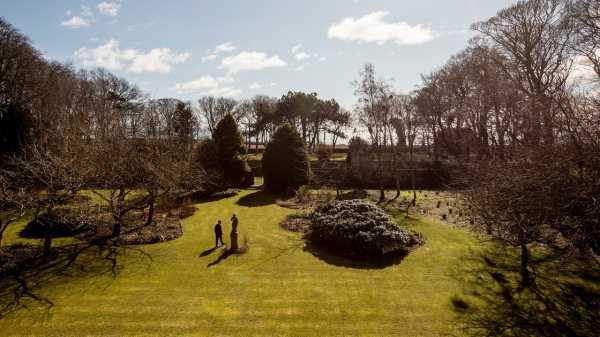 There may be no more trenchant metaphor for the creative process than the Artist in Residence program at the San Francisco Transfer and Recycling Center, a forty-seven-acre garbage dump on the western banks of the 101. Since 1990, select artists have been offered studio space and “scavenging privileges”—a chance to stumble through mounds of discarded scraps and impedimenta, cart their finds back to their garrets, and reassemble those armfuls of trash into something deep and resonant. Using repurposed materials is certainly a noble and necessary endeavor (the program was founded by the progressive artist and activist Jo Hanson, with the hope of normalizing recycling). But the symbolism of sequestering artists to the garbage pile is perhaps too hilarious and heartbreaking to ignore.

In the past decade, a spate of unconventional residency programs have offered unused (or otherwise flexible) space to artists starved for time, solitude, or simply a room of their own, and as a result artists have taken up residence on moving Amtrak trains, a barrier island off the coast of Texas, the tower of a bridge that crosses a shipping canal, and an oceanographic research vessel. I can’t decide whether the grimness of some of these places (many are a stark contrast to the silent, idyllic pastures of the MacDowell Colony and Yaddo, two of the nation’s most venerated and competitive residency programs) is simply funny or an apt and horrifying reflection of how America presently esteems its artists.

Last year, more than four thousand (!) writers applied to a residency program at the Mall of America, in Bloomington, Minnesota. The gig included a twenty-five-hundred-dollar honorarium, a four-hundred-dollar gift card, hotel accommodations for four nights, and the opportunity “to spend five days deeply immersed in the Mall atmosphere,” sucking in the salty wind of corn dogs and freshly buttered pretzels, pondering the whirr of the Pepsi Orange Streak roller coaster, watching shoppers idly browse for shorts. This summer, the Queens Council on the Arts and the Port Authority of New York and New Jersey partnered to install a series of Queens-based artists and writers at LaGuardia Airport—perhaps the most desperate location in all of New York City. (Artists accepted into the program occupy a repurposed Hudson News kiosk for three months.)

Writers love lecturing anyone who will listen about how the work requires total isolation and commitment. It does, at the very least, demand sustained thought, which is an especially difficult thing to make space for in the present era. I myself have taken off for the hills when the static started to seem insurmountable—when a deadline was bearing down, and I could no longer discern the signal from the noise. Obviously, it’s a privilege to be even moderately equipped or allowed to do this—the luxury of frantically hollering “Not today!” to your unswept floors, to your loving partner, to the person on Twitter offering unsolicited advice, to your family members, to your other deadlines, to the thirty-seven kindly e-mails requesting an hour or eight to “pick your brain.” It is unquestionably a gift to be able to cram a pile of clothes and notebooks into the passenger side of a car and mash the accelerator.

Making art almost always requires failure—you’ve got to flail for a while, to swing and miss, miss, miss. But failure requires a financial cushion, a way to pay the bills while you figure out what you’re doing. Almost every working artist I know has several sources of income—they cobble together a Franken-career of freelance gigs, teaching appointments, one-off projects, and periodic office or restaurant stints. The stress of managing a dozen concurrent jobs can become paralyzing. The proliferation of oddball residencies simply reiterates how hysterically difficult it is for contemporary artists who are not born rich to nurture or sustain any sort of creative practice. In the midst of this, a silent room with your name on the door—wherever it is, and regardless of whether it has plumbing or not—becomes a kind of life preserver.

Of course, to advocate for the arts now, in an age in which so many people are suffering so urgently (from lack of health care, shelter, sustenance), feels like outing yourself as a pretentious gasbag. The culture so often considers creative work an indulgence, a trifle—the terrain of dilettantes, heirs, and heiresses. (When struggling artists gather to kvetch, “Oh, they’re rich” is the most biting insult hissed across the bar.) To hold and affirm that creative work is essential to the spiritual well-being of any thriving civilization feels almost too pie-eyed to bear.

Residency programs suggest that the best thing to do is to shrink and compartmentalize the whole process—to arrange for some brief, glorious period of time in which you get to live in the bathroom of a McDonald’s, or rattle around the back of a U-Haul, or, if you’re particularly lucky, decamp to some breathtaking cabin in the countryside, and make your stuff. Perhaps one no longer lives as an artist but merely vacations as one.

China Expresses ‘Unhappiness’ Over US Aircraft Carrier in Vietnam