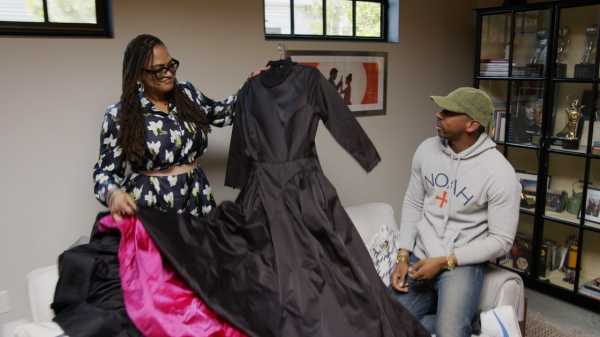 “Styling Hollywood,” on Netflix, illuminates the work of a celebrity stylist better than any of its basic-cable predecessors. For all the hectic visual clutter and self-promotional chatter of “The Rachel Zoe Project,” for example, it seemed possible to watch a whole season of it without getting a good look at a great dress, or hearing a fine quip about a bad one. Such shows are often content to bask in the secondhand splendor of the stylist’s clients and in the decadence of overstuffed showroom racks. But this series, which charts an awards season in the life of the stylist Jason Bolden, carefully outlines the serious craft of costuming a star for a red-carpet performance. In passing asides and straight-to-camera avowals, Jason shares his strategies for flattering clients’ figures and playing to their personae. Thoughtfully, he grooms the plumage of Eve, who loves a jumpsuit; of Taraji P. Henson, who loves to play with a skirt; and of Yara Shahidi, who requires that her outfits permit her to dance the robot. Sending off a starlet to the People’s Choice Awards, he glows with the satisfaction of “watching my child go to prom.”

Because Bolden’s business, the vowel-spurning JSN Studio, includes an interior-design practice led by his husband, Adair Curtis, the show is also a wholesome domestic soap. The Bravo tone of its living-room makeovers and tailoring challenges is freshened by spritzes of up-with-the-culture earnestness. The representation of a gay black couple is refreshing, and Jason has a charming way of abetting “black-girl magic,” as he says, sincerely sloganeering.

The household quarrels about cleaning and goal-setting and competitive breadwinning have an intriguing texture. Jason and Adair live in Los Angeles, with a goldendoodle deserving of more screen time than he is allotted, in a home they’re still settling into. The pristine condition of their Viking Range indicates that it has never been cooked upon and perhaps never will be, until caterers cruise in to whip up a vegan-ish housewarming dinner party. Jason is the dopey dad on the sitcom of their life, despite not yet being a father. Adair wants to have a kid, and there’s tension around Jason’s avoidance of an appointment with a surrogacy agency. Meanwhile, Adair’s function, beyond terrorizing contractors who are tardy in delivering custom furnishing, is to run their house, to manage their business affairs, to be a sensible guy and a charming plus-one. The season culminates with Jason dressing Ava DuVernay, among many other clients, for the Vanity Fair Oscars party and Adair’s somewhat less glamorous struggle to install a kitchen window for the actor Dulé Hill.

This is a show about the perils and rewards of mixing business and pleasure, about the fake-friendliness of L.A. and the hustle of working connections. In this field, intimacy is a professional skill in terms of both air-kissy etiquette and, more important, in the sense that Jason uses empathetic imagination to put himself in a client’s skin. And, within the headquarters of JSN Studio, we witness some special problems in working with close friends. Beyond the professional friction between methodical Adair and flighty Jason—who sometimes gets ideas for clients’ clothes from dreams, like Coleridge receiving “Kubla Khan”—there are the workplace relationships between older millennials and their youngers, who prove hilariously entitled and innovatively tone deaf. After Adair fires his operations manager, who is also a longtime pal, she texts him to check on his feelings: “Hope u ok.” Meanwhile, Jason points out errors made by John, his put-upon styling assistant, who assuages his hurt feelings with lemon drops and Xanax.

The producers do not necessarily share the stars’ attention to detail. A crisis arises when it seems that a gauzy gown intended for Janet Mock to wear to the Golden Globes is unacceptably sheer, despite the addition of a lining. We’re on high alert to witness the problem’s resolution, but the issue just floats like a tuft of down. In one scene, Jason reacts to the scandal of Gucci’s offensive cluelessness in marketing a sweater evocative of blackface minstrelsy. He makes a cogent point about how the incident demonstrates a lack of diversity within top design houses. The show implies that there might be some immediate consequences for his relationship with the brand, but then it drops the subject, so the undeveloped story line feels tacked on.

The haphazardness of “Styling Hollywood” is both a limitation and a charm. High style merges with basic cheese. We might define the tone of the proceeding as “econo-luxe,” to borrow Adair’s term for some furniture he shows to Gabrielle Union. (If the term sounds like jargon describing a price point in the boutique-hotel market, then you have a good idea of the sleek blandness of the JSN Studio interior-decorating style, which suggests a Jennifer Convertibles take on Le Corbusier.) On the other hand, the series serves up tasty juxtapositions on a regular basis. You do not often get to see actors of the calibre of Sanaa Lathan, who hires Adiar to redecorate an Airbnb rental she owns, in this sort of docu-soap context. Lathan wears a drama student’s cozy oversized cardigan for the first meeting, a ballet master’s severe bun for the reveal, and an air of gentlest self-amusement all the while.

And what of Jason’s own clothes? He tends to wear sedate streetwear from Noah and Palace and Supreme and a lot of ball caps in dadcore corduroy—stuff so relentlessly on trend that it signals his sure knowledge of what tastemakers consider current. It’s also a form of camouflage. Even when clad in a lemon-yellow sweatshirt, he disappears into his environment as thoroughly as a stagehand all in black. It’s the spruce uniform of a personal-brand manager.

Voters recall judge who sentenced Brock Turner to 6 months in...