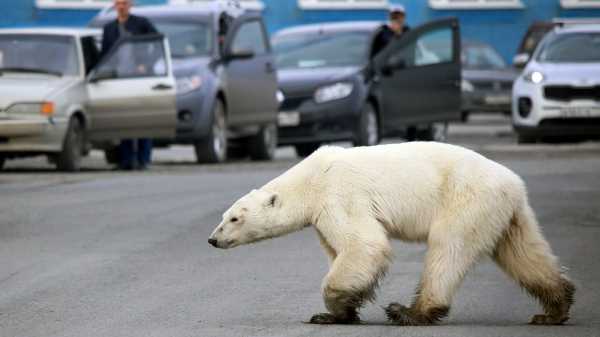 Last Sunday, a polar bear turned up in Norilsk, an industrial city in Siberia known for the production of nickel, for the first time since 1977. Visibly sick—thin and weak, with diarrhea and watering eyes—she roamed the city, feeding from a garbage dump and resting in the lot of a sand and gravel factory. In one haunting image, the polar bear walks toward a line of cars, her paws dirtied, her head bowed in a way that seems serene, almost deferential. A few drivers have opened their doors and are standing beside their cars, peering out at the animal. To reach Norilsk from the Arctic, she would have had to travel hundreds of miles. Polar bears rely on sea ice to hunt seals, and, as it melts, they must either seek other sources of food or go hungry. The bear’s pilgrimage, some local environmentalists speculated, was likely undertaken out of starvation. This one image, then, seemed to encapsulate both the tragedy of climate change and the resilience of nature.

Only, it turned out, this was not what happened. A team of specialists examined the polar bear and found that her coat (still white) was too clean to have weathered such a journey. It was possible that she had been captured as a cub and raised by nearby poachers, who, fearing a recent crackdown, released her to stay out of trouble. In any case, the wildlife experts have transferred her to a zoo, where she can be cared for and treated for the illnesses she contracted by eating garbage.

This was not the first disputed image of a starving polar bear. In 2017, Paul Nicklen and Cristina Mittermeier captured a video of a polar bear ambling across an iceless archipelago in the Canadian Arctic and feeding from trash cans. The bear was skeletal, with a patchy coat, and weak to the point of collapsing. After National Geographic published the video, overlaid with the text “This is what climate change looks like,” it was viewed by an estimated two and a half billion people. But some scientists accused National Geographic of being loose with the facts. There was no way of knowing that climate change was the sole cause of the animal’s starvation, they contended; it may have been merely ill or old. In response, National Geographic published an explanation, written by Mittermeier, titled “Starving-Polar-Bear Photographer Recalls What Went Wrong” that included the line “Perhaps we made a mistake in not telling the full story—that we were looking for a picture that foretold the future and that we didn’t know what had happened to this particular polar bear.” The photographers’ incomplete, if not incorrect, knowledge undermined the larger truth that they were trying to communicate.

The story of climate change has been told, in part, through pictures of polar bears. And no wonder: in their glittering icy habitat, they reflect the otherworldly beauty that rising temperatures threaten to destroy. The photographs from Norilsk this past week were not precisely of a species forced out of its habitat by climate change—though, as a story of human cruelty, they are no less disturbing—but the visceral reactions they inspired were arguably an appropriate response, nonetheless, given the current crisis. Because of its nickel-mining and smelting industry, Norilsk is one of the most polluted places on Earth—the average life expectancy is about ten years shorter than in the rest of Russia. In 2016, industrial waste from the nickel factory caused the city’s Daldykan River to run red. The presence of an animal that we are accustomed to seeing in pristine natural beauty makes the whole setting seem even bleaker and more corrosive. Yet to see a line of cars stop to observe a creature whose habitat their emissions are destroying is like an instance of restorative justice—the culprit and victim encounter each other face to face. It provides a rare opportunity for us to confront the far-reaching moral consequences of our seemingly benign actions, like driving. No revelation about the situational truth of the image should feel like permission for us to simply look away and get back in our cars.

Trump: Meetings Being Set Up With North Korean Leader