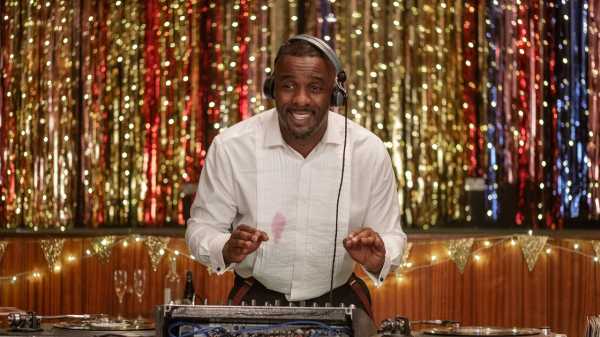 With breezy pop tones and a heaving sampling of classic sitcom beats, “Turn Up Charlie” (Netflix) plays as if “Who’s the Boss” were remade by Nick Hornby. As the title character, Idris Elba makes a man-boy of a certain age. Charlie is a musician who enjoyed a youthful summer as a one-hit wonder, then squandered his money on fast living and his talent on slacking. Now he lives in an LP-lined room in a London house owned by his parents and overseen by a squalling auntie. He works, slightly more than just barely, as a disc jockey. When Charlie spins at a friend’s wedding reception, People magazine’s reigning Sexiest Man Alive wears a burgundy smoking jacket of sleazy visual texture, a pre-tied bow tie, and a red-wine stain on the pleated bib of his tuxedo shirt—a visual tragedy for Elba fans slavering to see him fitted for James Bond’s evening suit.

The wedding sweeps a dear chum back into Charlie’s orbit—David (JJ Feild), a movie actor who is relocating to London from Hollywood, where he acquired a music-producer bride (Piper Perabo) and a difficult daughter. The kid, Gabrielle (Frankie Hervey), enters terrorizing a nanny by stealing a sex toy and ramps up her misbehavior from there. Her level of entitlement indicates that she has been reared in green rooms and gifting suites. Her haughty, wise-beyond-her-years manner (“Bitch, please” is her all-purpose retort) is meant to suggest the willful snorting of a wild stallion, but cutesily so.

If you can’t see where this is going, then you are due for a remedial course in sitcom dynamics. Charlie, reluctantly signing on as Gab’s manny, makes a giant leap toward becoming a proper adult; the tyrannical moppet, bolstered by his guidance, makes strides toward becoming a reasonably maladjusted tween. The meat of the show has a pre-masticated texture, but there’s a charm to its shaggy clichés. It’s a kind of TV-comedy mosaic: chunks and shards of sitcom commonplaces—the wisdom of the child, the redemption of the overgrown juvenile—are spackled together by moments of sincerity. The goopiness and familiarity of Charlie and Gab learning and growing by trading valuable lessons is balanced by a bit of tart commentary on child-rearing and on ripening into middle age. Perabo, who is quietly excellent in the role of a hardworking hipster mom, gives a performance that speaks to any parent’s anxieties about his or her divided energies. The distance between the antique disciplinary philosophies of Charlie’s Nigerian elders and the parodic new-school woo-woo of Gab’s parents gives some tension to the silliness.

The fact that Elba, who created “Turn Up Charlie” with Gary Reich, is himself a d.j. contributes to the larkish mood. As a thespian, he is working at about the level of George Clooney in a Nespresso ad, and the qualified success of this vanity project is a function of his humility. The slightness and lightness are soothing, in this quiet-storm remix of a sitcom pastiche. You feel that he has been wise enough to delight in the foolishness of Charlie’s situation, and you feel charmed to be let in on his boondoggle.

Delaney steps down as FAI CEO but retains control of key...

Against Chill: Apathetic Music to Make Spreadsheets To |