Home Culture With the People’s Vote March, Brexit Goes Down the Rabbit Hole | 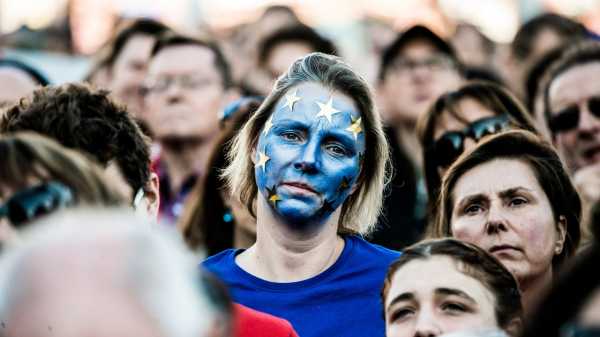 It would be an error to imagine that the weather in London might ever be described as reliably beautiful, but, over the past few weeks, the heat wave that gripped the city during the summer has subsided into what has seemed like weeks of climatic grace. There have been days upon pleasant days in which the temperatures have been disconcertingly mild, high blue skies streaked with light clouds that provide painterly decoration without compromising the effect of the sunshine. There has been negligible rainfall, at least by the usual standards of the season, or the nation. It’s been weird, frankly: almost Continental.

Saturday, the twentieth of October, dawned yet another glorious day, no doubt to the great relief of the instigators of the People’s Vote march, which had been organized to protest the conduct of the Conservative government in its negotiations over the country’s exit from the European Union following the Brexit referendum of 2016. The marchers flooding the streets and squares of central London in their shirtsleeves were Britons and U.K. residents who wish to remain Continental in more than just meteorological terms. The marchers were calling for a second referendum—a so-called People’s Vote—to accept or reject whatever terms, if any, the embattled Prime Minister Theresa May is able to secure from her European counterparts for future relations.

Speakers at the rally on Parliament Square featured representatives from the Labour Party, including Sadiq Khan, the Mayor of London, who has positioned himself as one of his party’s leading spokespeople in favor of reconsidering the Brexit decision. The actual Labour Leader, Jeremy Corbyn, has refrained from taking up the anti-Brexit banner, literally or figuratively. (Corbyn, a veteran of protest marches for the past half century, was notable by his absence on Saturday; he tweeted that he was in Geneva, discussing human-rights and workers’ rights with Michelle Bachelet, the former President of Chile.) There were Tories, too, including Anna Soubry, a Conservative Member of Parliament who has been outspoken in her criticism of the hard-line pro-Brexit forces in the Tory Party that pursued the referendum in the first place, including Boris Johnson, the former Foreign Secretary and perpetually aspirant Prime Minister. She has also been critical of Theresa May, who was against Brexit before she was for it. “Nobody voted to be poorer, and nobody voted Leave on the basis that somebody with a gold-plated pension and inherited wealth would take their job away from them,” Soubry said in a much-tweeted Parliamentary speech over the summer.

Other participants in the march included children and pensioners and everyone in between, with protesters engaging in good-natured competition over whose banner or placard was wittier. “I’m A Bit Cross,” read one sign, with a nod to fabled British understatement, while there was more than one repurposing of Banksy’s recent shredder coup, with pro-Brexit campaign posters dangling in tatters from a picture frame. The protest drew an estimated seven hundred thousand people to the streets. That’s the equivalent of more than one in ten of the population of London, though the crowd came from all over the British Isles to participate. (Sixty-two per cent of Scots voted against Brexit, and Nicola Sturgeon, the First Minister of Scotland and the leader of the Scottish National Party, sent a message of support to be broadcast to the rally.) It was reportedly the second-largest political protest ever mounted in the capital, bested only by the 2003 demonstration against the war in Iraq.

Of course, it could be argued that the largest-ever political protest mounted in the country at large was the Brexit vote itself, in which seventeen million four hundred and ten thousand seven hundred and forty-two ballots were cast in favor of leaving the European Union; a million two hundred and sixty-nine thousand five hundred and one more than voted to stay in it—a victory of just under fifty-two per cent of the voters against just over forty-eight per cent. (The turnout for the referendum was seventy-two per cent, which is in the realm of typical for voter participation levels in the U.K. in national elections.) As with the election of Donald Trump that followed in the United States a few months later, the underlying motivations for the pro-Brexit vote have been endlessly analyzed. Was it justifiable resentment against technocratic elites by blue-collar workers with diminished opportunities? Was it xenophobia, and hostility toward immigrants fleeing economic hardship or the dangers of armed conflict in their home countries? Or was it just a giant fuck-you gesture that was never in a million years expected to succeed?

Whatever the reason for the result of the vote in 2016, it has become an article of faith among the proponents of the People’s Vote that what absolutely nobody voted for was the current state of affairs, in which the deadline for the U.K.’s withdrawal from the E.U.—March 29, 2019, at 11 A.M.—draws ever closer, while the terms of the U.K.’s departure are yet to be determined. Just as every day in the United States brings news of yet another hitherto unimagined depth plumbed or depravity committed by the President—“voluntary family separations” of migrants; or the attempt to legislate transgender people out of existence—every news cycle in the U.K. offers yet another updated iteration of deadlock, ever more complex, beleaguered, and dull. Over the past couple of weeks, May and her Brexit Secretary, Dominic Raab, have been taking it in turns to shuttle to Brussels in an attempt to find a resolution to the still unanswered questions of how, in practice, Britain will extricate itself from its ties with Europe, given the pending invalidation of existing agreements over the movement of people, goods, and services. Exactly how, post-Brexit, one will be able to shuttle between London and Brussels is one of those questions that has yet to be answered.

May’s efforts were rewarded, this weekend, by an unnamed source in her own party telling the Sunday Times that the Prime Minister is close to utterly losing the confidence of her Parliamentary colleagues. The source, a Tory M.P., put it more colorfully, stating that “the moment is coming when the knife gets heated, stuck in her front, and twisted.” This week, May told Parliament that a deal with Europe was ninety-five per cent settled, as if the remaining five per cent were a mere technicality. Unfortunately, the unsettled part of the deal includes the uncertainty around how Brexit will affect the border between Northern Ireland, which is part of the United Kingdom, and the Republic of Ireland, to the south, which decidedly is not. Any kind of Brexit—hard, soft, or middling—will present a threat to the delicate balance achieved by the Good Friday Agreement, which has enabled twenty years of peace, and is only one of the impossible possibilities that May is now faced with reconciling.

If it weren’t all so momentous, the unfolding chaos of Brexit would be almost comical: a farce in the high British style, featuring buffoonish Brexiteers, Boris Johnson chief among them, insisting on the virtues of “sovereignty,” while the pound declines, grocery prices inflate, and chief executives of global companies look around for other capital cities to run their operations out of. Even the most committed anti-Brexit skeptics—among them many of the marchers in London on Saturday—admit to sometimes feeling a bit sorry for Theresa May, who has to pretend that she can reconcile opposites, or that any deal Britain will ultimately emerge with is anything other than a self-inflicted wound that may take generations for the country to recover from. These days, Theresa May resembles no one so much as Alice in Wonderland in conversation with the Cheshire Cat—trying, with mounting frustration, to make sense of what is inherently senseless. “But I don’t want to go among mad people,” Alice tells the cat. “Oh, you can’t help that,” the cat replies. “We’re all mad here. I’m mad. You’re mad . . . You must be, or you wouldn’t have come here.”

Like Alice, May is unsympathetic, judgmental, and hardly free of blame for her predicament: she sought the premiership, after all, after her predecessor, David Cameron, was obliged to resign for having instigated the Brexit vote that he expected to fail. Still, one can’t help wondering if May is feeling as Alice did, that life was much more pleasant before her adventures began, “when one wasn’t always growing larger and smaller, and being ordered about by mice and rabbits.” The spectacle of Brexit is likely to get more surreal in the coming days and weeks, as, for example, the government counters rumors that it is making contingency plans not just for empty shelves in the supermarkets and grounded planes in the airports, but for the possibility of a second referendum—a People’s Vote—which May has consistently refused to countenance. In Parliament on Monday, Vince Cable, the leader of the Liberal Democrats, got a non-denial denial out of May when he asked if it was true that Whitehall was preparing for such an eventuality. Meanwhile, with Saturday’s march over, the weather’s turning. According to the Met Office, Britain’s going to see a chill descending from the north, dispelling the balmy days of this very peculiar fall with the first signs of winter. There may be ice, gales, perhaps even sleet or snow. The barometers likely won’t rise again in any substantial way until the spring. By then, we’ll all know what March, or marching, will bring.