Home Culture Witnessing the Moon Landing in Ireland, at the Start of the Troubles... 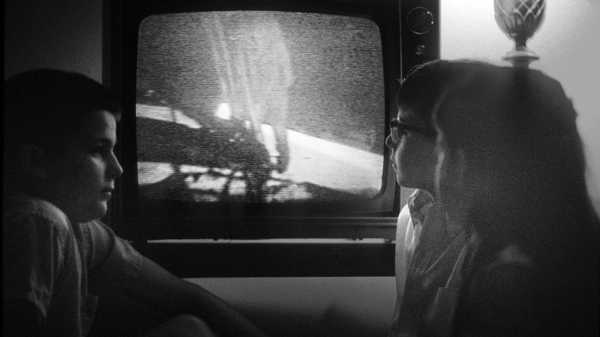 Fifty years ago this summer, I spent a long, sometimes lonely six weeks in Belfast, meeting my Irish family. It marked the first real summer of the Troubles; it was also the summer that the United States, having been urged on by a President of Irish descent, put a man on the moon. While in Ireland, at just ten years old, I was trying to comprehend what Seamus Heaney calls “The famous / Northern reticence, the tight gag of place / And times”—places and names and history and borders—as best a mere child could.

I am complicatedly Irish-American, though, to be fair, one’s heritage is never quite simple. My grandfather, Adam Fiddis, was born in Omagh, a small town in County Tyrone, in 1903. Ireland was, at that point, just Ireland—not yet split in two. When partition came, in 1921, the population of Northern Ireland was approximately two-thirds Protestant, one-third Catholic. But, in Omagh, the balance was flipped—my grandfather was a Catholic in a majority-Catholic city and county, within what would become, by design, a majority-Protestant country. Ellen Lewis, the Belfast woman that he met and married, however, was Protestant—and, by the strictures of the Catholic Church, this meant that the Church would not sanction their marriage without a dispensation. My grandparents had a “mixed marriage” of the kind evoked by Paul Muldoon in his poem of that name. My grandfather left the Church for my grandmother and never looked back.

In July of 1969, my grandfather was returning to Belfast from California, where he had moved, on a sober errand. My grandmother had passed away of emphysema in the spring, and he wanted to visit her family. He invited me, his oldest grandchild, to accompany him. Upon landing at the airport, we were met by aunts, uncles, cousins—some ill-defined mélange of family whose precise outlines and throughlines eluded me. On the drive to town, I sat in the back seat, surrounded by animated young cousins whose Belfast accents hit my ear with an unfamiliar rhythm and an enchanting music. I just smiled at their questions (I think they were questions?) and pleaded jet lag.

The majority of that trip, at least as it survives in my memory, was spent in my aunt Emily’s front room, in her modest row house on the Shankill Road. According to the religious segregation of Belfast, the Shankill Road was (and remains) Protestant territory. The expression “over the road,” I learned, referred to the Falls Road, nearby, where the population was Catholic. My adult relatives talked endlessly about their shared past, in voices that I strained to understand. Even the big diphthongs that my grandfather’s years in the States had tamped down swelled back to their former glory in this company. My great consolation was British comic books, such as “The Beano” and “The Dandy”—in some ways every bit as mysterious as the adults’ talk, their slang and cultural references largely lost on me. But studying them helped me pass the hours.

Quiet as that front room was, the streets of Belfast that summer were anything but. Historians of the Troubles tend to begin with the summer of 1969, when marching-season celebrations on July 12th, in Derry and Belfast, erupted into street violence between Orange Order Protestant marchers and residents of the Catholic neighborhoods, whom they went out of their way (literally) to antagonize. Nearly every day of our visit, the front page of the Belfast Telegraph, a Protestant loyalist-leaning paper, soberly brought news of violence—as if that violence and its own brand of religious and political sectarianism were unrelated. On July 14th, the paper released a “Twelfth Souvenir Edition with pages of pictures of the great day”; the front page of the paper, however, was overwhelmed by a photo of a Roman Catholic meeting center in Derry engulfed in flame, and, elsewhere in the paper, headlines announced a “Long Week-End of Violence.” That violence quickly spread to Belfast, where a car was overturned and set on fire by a mob in Hooker Street. 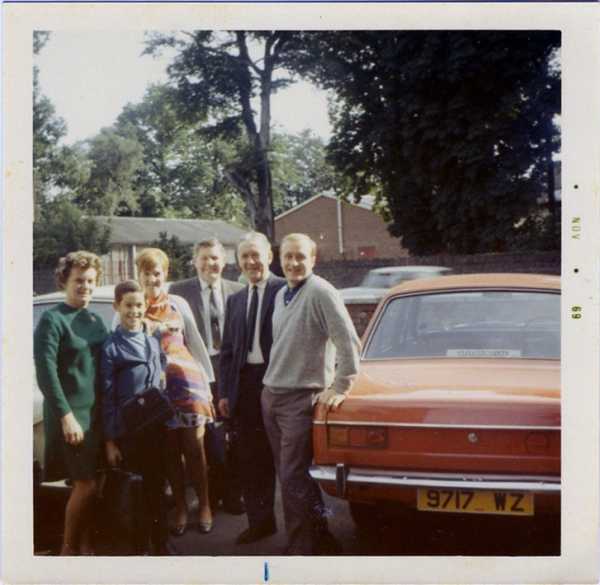 Members of the author’s family in Belfast, photographed by his grandfather, Adam Fiddis.

In the midst of all this turbulence, Northern Ireland came together for a brief, informal ceasefire, on the night of July 20th—when Apollo 11 landed on the moon. While my friends back home watched the event that Sunday afternoon on their color televisions, in Belfast, we sat breathless in my aunt’s front room and watched in staticky black-and-white as the Eagle landed at 9:17 p.m. The Belfast papers had been registering the building excitement for the moon landing since before the July 16th launch. For each of the first five days of the moonshot, the papers carried stories tied to events, such as the launch and the entry into lunar orbit, and also provided primers on the subject, such as “An A-B-C Guide to Lunar Language.” But these Apollo stories had to fight for real estate with the earthly news. On the July 16th front page, an article with the headline “RUC Seek Help in Death Riddle as Inquest is Cafelled”—detailing the police (Royal Ulster Constabulary) investigation into the death of a farmer killed in rioting in Dungiven, outside Derry—is nestled uncomfortably beneath an article titled “Blast-Off—And It’s Destination Moon.”

Meanwhile, my ten-year-old imagination was sparked by an ad offering a “Free Moon Kit” with every new television rental. Though my aunt had no indoor toilet facilities, she did own a telly, so no moon kit for me; she was more interested, anyway, in the Irish linen tea towel commemorating the lunar landing, made by the Ulster Weaving Company.

The day after the moon landing brought another one of those interminable afternoons in the front room—nothing on the telly, stale, old-folks’ chat in the air. The quiet was interrupted by a knock at the door. A kid, a boy about my age if not younger, asked my aunt if she had any bottles. Did she? She had a whole sack of them sitting by the front door, which she handed over without question. I found the whole exchange baffling—but with a pre-teen’s self-consciousness about asking a stupid question, I just bit my tongue. When we were back at our hotel that evening, I asked my grandfather what it was all about. “Molotov cocktails,” he said: petrol bombs. That boy was collecting bomb-making materials; my aunt knew he’d be coming—some he, at some point—and had them at the ready. Just another extraordinary—which was quickly becoming ordinary—day in Belfast. The day after we had landed a man on the moon.

It was many years before I began to understand the more disturbing layers in that scene at the front door. Those petrol bombs—they were being collected on the Shankill Road, hence from Protestants (and presumably by Protestants). They were being assembled to inflict damage on the people “over the road”—which is to say, the Catholics. Which is to say, my grandfather’s people. The battle lines were bright and clear—and incredibly porous.

Reading Anna Burns’s “Milkman,” a 2018 novel about the human scale of the Troubles, helped me to understand some of these unprocessed memories anew—the power of names, for instance. In Burns’s novel, a couple keeps a list of the names that aren’t allowed in their Catholic neighborhood: they “didn’t decide themselves on these names. It was the spirit of the community going back in time that deemed which names were allowed and which were not.” My grandmother was called “Nell,” short for “Ellen”—an English name through-and-through. It was a name that would not have been allowed in the community of “Milkman,” but that was not her community—those were not her people.

My grandfather’s name, though, is the more interesting case. He was called “Bert” by everyone who knew him, friend and family alike: but his passport clearly records his name as “Adam Francis,” a dead-giveaway Catholic name. (The 1911 census also records that, at age eight, my grandfather could read and write, but that his parents were illiterate.) “Fiddis” (or “Fiddes”), on the other hand, a Scottish name, signified (though misleadingly, in this case) Protestant. In the fullness of time—or rather, according to family legend, somewhat before the fullness of time, by lying about his age—my grandfather enlisted in the Royal Inniskilling Fusiliers, a Northern Irish regiment of His Majesty’s Army, garrisoned at St. Lucia Barracks in Omagh. In so doing, he left his town’s Catholic-majority community and joined one of its few Protestant-majority enclaves: the British Army. “Adam” Fiddis soon became “A. Fiddis,” which is how he continued to sign for the rest of his life. “Adam” became “A.” in an attempt to slough off his Catholic identity, and this maneuver was more effective than he could have dreamed: his brothers-in-arms in the Fusiliers assumed that “A.” stood for Albert—after Prince Albert, Victoria’s beloved—and so took to calling him first “Albert,” then just “Bert.”

Though my memories of that summer are mostly indoor memories—memories of antimacassars and tea towels and biscuits—I retain a vivid outdoor memory as well. One day, my grandfather decided that we should walk the few blocks from our hotel to a pub, where he and his mates used to drink, so we could eat a pub lunch. As we rounded the corner, the building came into view, but it had been turned into a pile of bricks and debris by a sectarian bomb. My grandfather was carrying his new Super 8 movie camera, and started filming. But a man in uniform—whether police or armed forces, I don’t know—approached us, holding his open palm out to the lens and suggesting to my grandfather that it might not be wise to record the scene. In his eyes, I suppose, my grandfather was just another American tourist fascinated by what would come to be known as the Troubles, vacationing in other people’s misery. I like to imagine that the never-captured images would have been a short, silent film about the friendships without borders—religious, political—that he had enjoyed in his youth, now reduced to rubble. That night, back at our hotel, for the only time in my life, I saw my grandfather weep.

A Quarter of UK Jobs to Be Lost During Coronavirus Lockdown,...