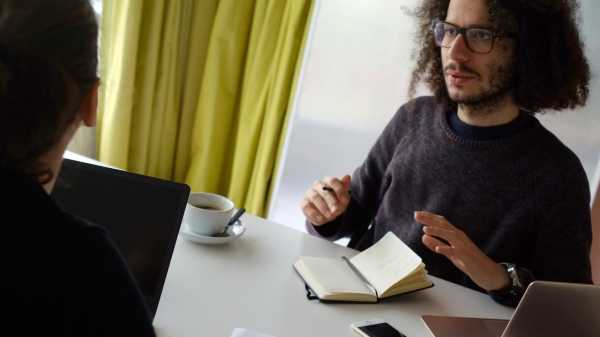 On a summer day, in the lakeside villa that houses Berlin’s prestigious Literary Colloquium, a dozen mostly young, mostly Syrian refugee writers took their seats around a large table. Together with the heads of two German publishing houses, a literary agent, a novelist, an editor, and two German-Arabic translators, these members of Weiter Schreiben, or Writing On, were there for a day-long crash course on publishing in Germany. The participants posed questions ranging from “Can an editor in Germany force you to change your poetic text?” (no) to ‘“If I want to write my novel in Persian, should I sell it in Afghanistan first, then translate it into German?” (maybe). “I’m happy to be in this workshop,” the Syrian novelist and journalist Abdullah Alqaseer said. Alqaseer arrived in Germany two and a half years ago, after fleeing the Assad regime. “We’ve suffered a lot with publishing in the Arab world,” he added, pushing back his long hair. Then he grinned and said, “Now we would like to suffer here.”

Writing On, a year-old organization that was founded in Berlin, pairs refugee writers with established German-language authors, and runs a Web site where, with the help of translators, members’ texts appear both in their original language and in German. The goal, according to Annika Reich, the German novelist who runs the project, is to help writers who had to flee their homelands jump-start their networks in Germany. She and a partner developed the idea while working intensively with refugees as the refugee crisis hit Germany. “Talking to writers, what we heard over and over was that, after safety and a place to live, what they wanted most was to keep writing,” Reich said.

Ahmad Katlesh is a thirty-year-old Syrian novelist and journalist who now lives in a small town in North Rhine-Westphalia. He regularly reads aloud passages from writers such as Dostoyevsky, the Iraqi poet Sargon Boulos, and T. S. Eliot for his Arabic-language podcast, which has garnered four and a half million plays, so far. For Katlesh, one of the nicest things about participating in the Writing On project is the contact that he has had with German readers. “I wrote a text about a refrigerator that went up in both languages on the Web site,” he said. “I’m getting e-mails from people I don’t know, from Germans. It’s great.” Some members, such as the thirty-six-year-old poet Rasha Habbal, thought that their literary careers would end with exile. “I didn’t come as a writer but as a normal refugee,” Habbal said. She made the harrowing journey from Syria to Germany, across the Mediterranean, alone except for her seven-year-old son. “I didn’t think I would write again.”

But, after joining Writing On, Habbal (whose Arabic-language publications include the 2014 poetry collection “Less of You, More Salt”) won a prestigious German literary fellowship that included a residency at the Literary Colloquium. Now she is using her time there to work on a novel in which she describes moments from her flight—such as the night when, locked in a Hungarian jail, she stole a sleeping bag to keep her child warm. But, she added, now that her husband and older son have safely joined her in Germany, the writing residency also serves as a welcome respite: “I need a break. After three years of stress, to have two months without kids—it’s a good chance to rest.”

The Syrian poet Lina Atfah, twenty-nine, said that Writing On opened doors that had been closed to her in Syria, where, as a teen-ager, she was investigated by the secret police for holding a public reading. The next time she was able to read aloud in public was in Cologne, Germany. “We had a long journey to this land,” she said. She is now working on a project in which she compares “Game of Thrones” to the situation in Syria. “Writing On was the first step in this country for me to continue my writing,” she said. During one of the Q. & A. sessions, the writer and publisher Gunnar Cynybulk noted that the large publishing house he heads, Ullstein Verlag, was started by a Jewish-German family whose members were forced to flee after the Nazis seized the company. Among the challenges that he saw for the Writing On members was the fact that poetry is not as popular in German as it is in their home regions. “I know, in your cultures, poetry has a higher respect,” he said. “But here it’s different. Germany is a prose land.”

Another challenge, of course, is the language barrier, Heinke Hager, an agent at Graf & Graf, an important literary agency in Germany, said. Because of the cost of translation, agents and publishers often have to rely on assessments of works made by translators, rather than having access to the texts directly. Still, Hager added, it is necessary to try to forge connections. “Integration only works when they can do their work here,” she said. So far, Writing On has arranged seventeen partnerships between refugee writers and German writers, who are put in touch to work together. The project has also published some sixty-five texts, both on its own Web site and in German newspapers and magazines. Several members have received fellowships, awards, and book contracts, and an anthology of members’ writings will be published as a book this autumn. Writers who have been paired together have spoken at the Frankfurt Book Fair and the German Chancellery, and travelled as far as Canada for joint readings.

Partnerships function on a highly individual basis, depending largely on the personalities involved, Reich said. While the novelist Svenja Leiber and the poet Noor Kanj have spent much of their time bonding over the challenges of navigating young motherhood—Kanj’s new baby happens to share a name with one of Leiber’s daughters—the poets Ramy Al-Asheq and Monika Rinck sit down together in Berlin for hours of intensive translation, poring over each other’s texts, image by image. “Being translated by another poet, it’s a new thing,” Al-Asheq, a lanky twenty-nine-year-old, said. He passed around a smartphone holding photos of the ruins of his childhood neighborhood in Damascus, which had been completely destroyed a few days earlier. “All of us living here in exile, we all have the same topics. You have to think about how to write it.”

Annett Gröschner and Widad Nabi have a different approach: they got to know each other by taking long walks through the city, as the East German-born novelist showed the Kurdish-Syrian poet the fast-disappearing traces of the former East Berlin. “‏Annett and I felt that our memories of places and loss were one, despite the different language and cities,” Nabi said. ‏ And, as so often happens with writing, the personal and the poetic have come to overlap. “Annett once gave me a piece of laurel soap made in Aleppo,” Nabi said. “I cried at home when I washed my hands—it reminded me of the soap in Aleppo's old neighborhoods.”

The sixty-five-year-old novelist Ali Alkurdi, who spent nearly a decade in prison in Syria, said he is not as hopeful as his younger colleagues about building a professional career in Germany. But, he added, he recently spent several days with a German student—she discovered his writing through the Writing On project, and is now writing a thesis about him. “It feels good to be recognized,” he said.

Okolie vs Chamberlain: I own London, says Lawrence Okolie